Stevenage return to action for the first time in 10 days for a Leasing.com Trophy Second Round tie versus Colchester United at the Jobserve Community Stadium…

Tonight’s fixture kicks off at the earlier time of 7:30pm, with tickets available at the following prices:

Tickets are only available from the ground on the day of the game or online via colutickets.com.

The Stevenage FC Supporters Association coach is NOT running for this fixture. Supporters have the opportunity to purchase a parking permit via 01206 755161 or by visiting www.colutickets.com.

For the first time in the competition’s current format, Stevenage have made it through to the knockout stages of the Leasing.com/EFL Trophy. However, back in 2013, Graham Westley took the team to the Southern Section semi-finals of the then Johnstone’s Paint Trophy, before falling away at Swindon Town on penalties.

Mark Sampson’s men will aim to better that performance, with a trip to Wembley only four games away.

Stevenage fell to defeat in the opening fixture of the Group Stages with a 3-0 humbling of MK Dons at The Lamex Stadium, before overcoming the challenge of Wycombe Wanderers at Adams Park a month later, securing a 1-0 win thanks to Jason Cowley’s early header.

In the final game of the Group Stage, Stevenage faced the challenge of Fulham Under 23s at home. Charlie Carter’s first half goal was cancelled out in the last minute by a Timmy Abraham strike, but Sacha Bastien turned Boro hero, with a match winning penalty save in the resulting shootout.

After a slow month of games due to postponements and cup knockouts, Stevenage know games will start to come thick and fast as we head towards the Christmas period and a run of wins would not go amiss.

Colchester United finished top of their group, a run including wins at home to Ipswich and away at Gillingham, as well as losing on penalties to Tottenham U23s.

Tonight’s trip to Essex is our second this season, having already played Colchester in Sky Bet League Two at the start of October.

Stevenage took the lead early in the first half with thanks to Jason Cowley’s effort from outside the box, before Eastman, Poku and a Nouble penalty wrapped up the win for The U’s.

On paper, December is Boro's best time to play Colchester United away. Our first ever meeting with The U's was on Boxing Day of 2011, a memorable record 6-1 in our first season in League One.

The fixture was then repeated on the same date last season, as goals from Danny Newton and Ben Nugent earnt Stevenage fans a very much welcomed late Christmas present.

There was also a Boxing Day meeting between the two sides in 2013, but we prefer not to talk about that one.

Stevenage supporters unable to attend tonight's game at the Jobserve Community Stadium can stream the action live from wherever they are. All midweek fixtures in 2019/20 are available for domestic streaming with an iFollow Video Match Pass. 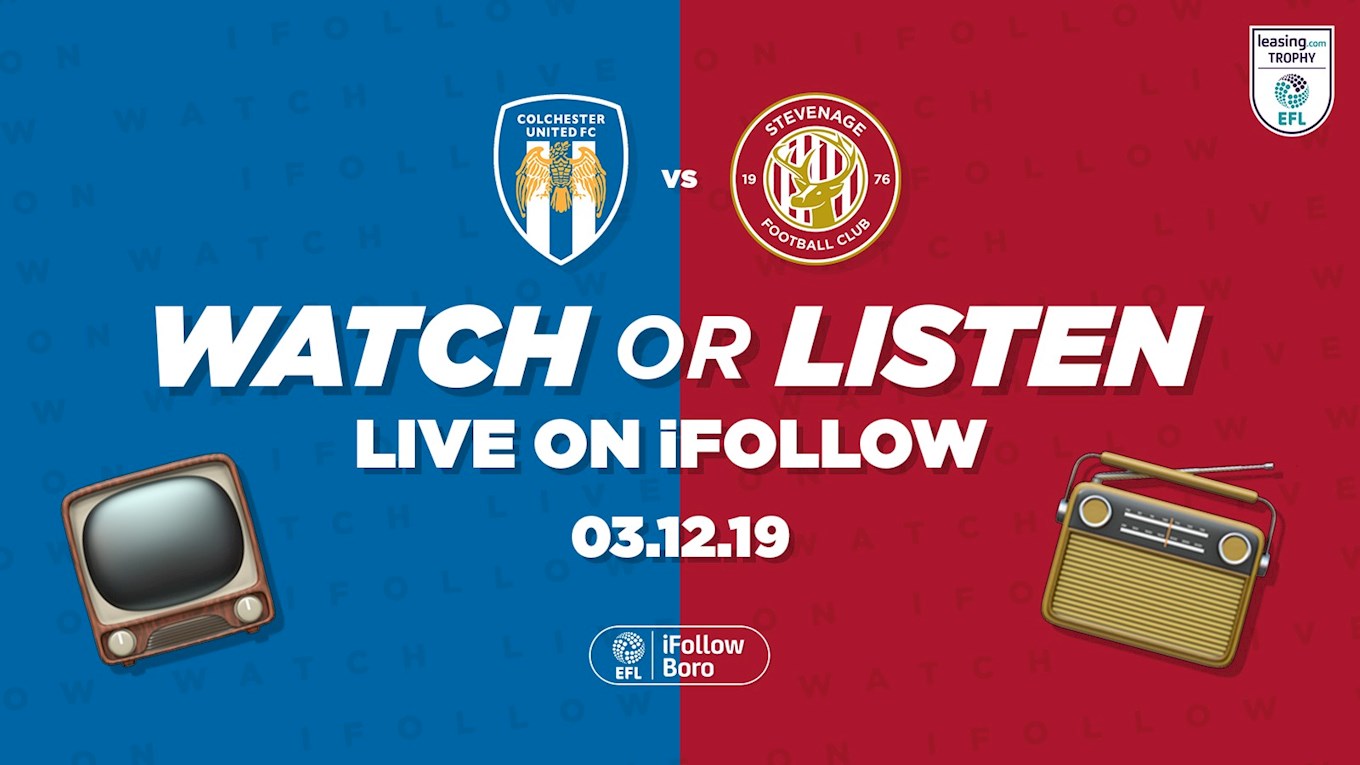 Make sure you are following our Twitter account throughout the day as we bring you the very latest from Essex.