Stevenage FC players met with the Hertfordshire Constabulary football team on Tuesday 2 July 2019  to back the force’s Lives not Knives campaign...

Officers from the force’s Gangs and Schools Team visited the Stevenage FC training ground, to speak with the players and to hand over specially branded Lives not Knives footballs. Photographs were taken of the players with the Lives not Knives balls and will encourage other clubs to do the same using the hashtag #PassItOn, in an effort to promote the campaign around the country.

Both teams took part in a photo shoot and donned branded wristbands, tee shirts and water bottles. The players also recorded messages of inspiration to be used in the #Passiton social media campaign to encourage young people to make positive life choices and realise that success is possible through sport, education and other path ways. 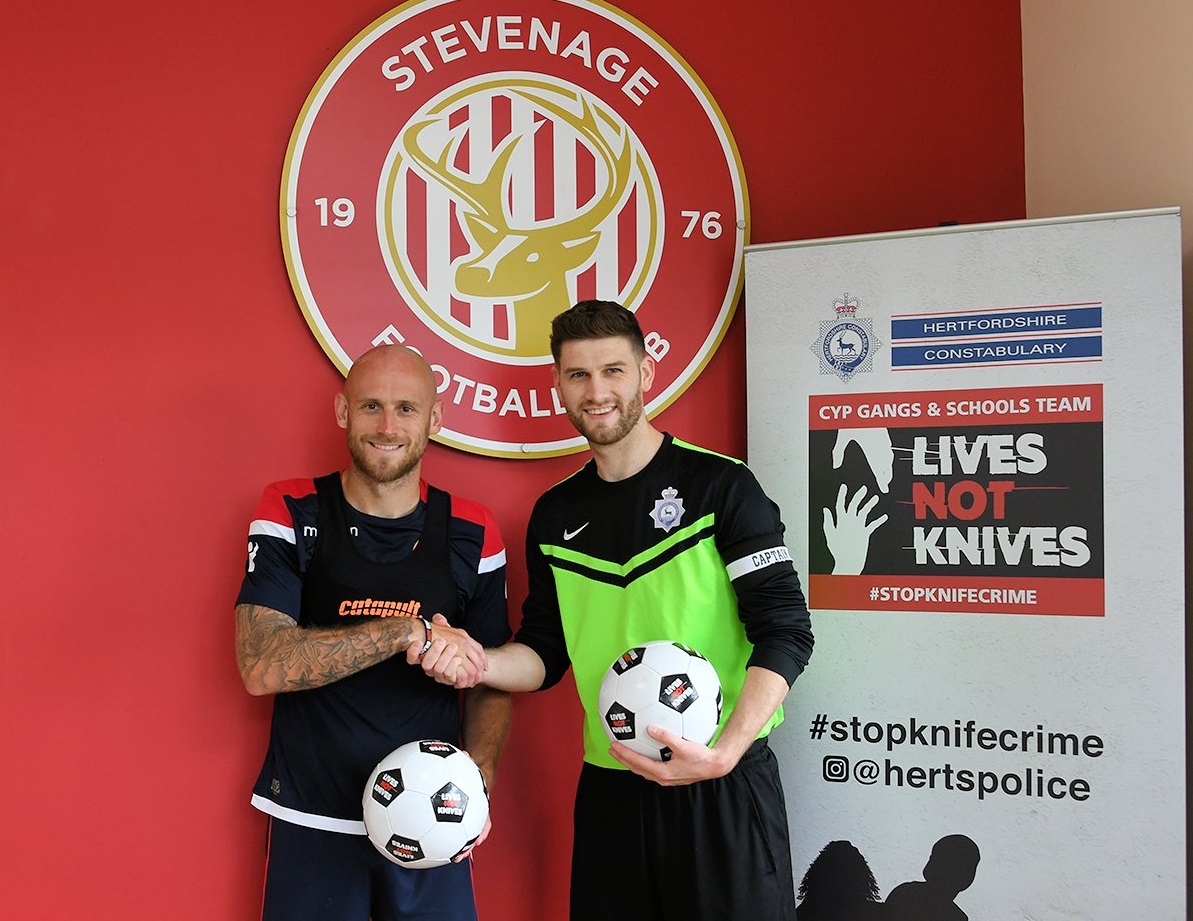 "Footballers are often positive role models for young people, so by them supporting our campaign it promotes the preventative message. We can then give these free ‘Lives not Knives’ footballs to youth and school football clubs in order to promote awareness of knife crime and associated criminality. The idea is to get as many teams as possible to show their support by being photographed with the Lives not Knives balls from local clubs right up to Premier League clubs by “passing it on”.

“It is fantastic that our football teams are on board with this campaign, so that we can work together to safeguard our young people in Hertfordshire and beyond. If you would like your football club to get involved then please contact me via: Helen.Croughton@herts.pnn.police.uk from the CYP Gangs and Schools Team.”

Glenn Quirke Stevenage FC’s Academy Operations Manager & Safeguarding Officer said, “Stevenage FC is proud to support such an important campaign. Lives not Knives is the most relevant message of our time. It's not about telling people what's right or wrong, it's about raising awareness about the choices they make and the consequences of our actions. Football really can make a difference so please #PassItOn.”

The Gangs and Schools team will be promoting the #PassItOn campaign through their Twitter channel: @HertsCYP and through Facebook.com/Hertpolice and @HertsPolice.