Stevenage Football Club is proud to reveal the Club’s New Crest, as the Hertfordshire Hart is brought to the forefront of our new design...

The launch of the New Crest comes following an extensive period of consultation, creation and examination as key stakeholders and supporters collaborated to create an identity that represents the Club, town and wider community with distinction and pride.

The New Crest will appear on the playing kits of Stevenage FC and Stevenage FC Women from next season, as well as all Training & Leisure Wear, which supporters will be available to purchase from July. 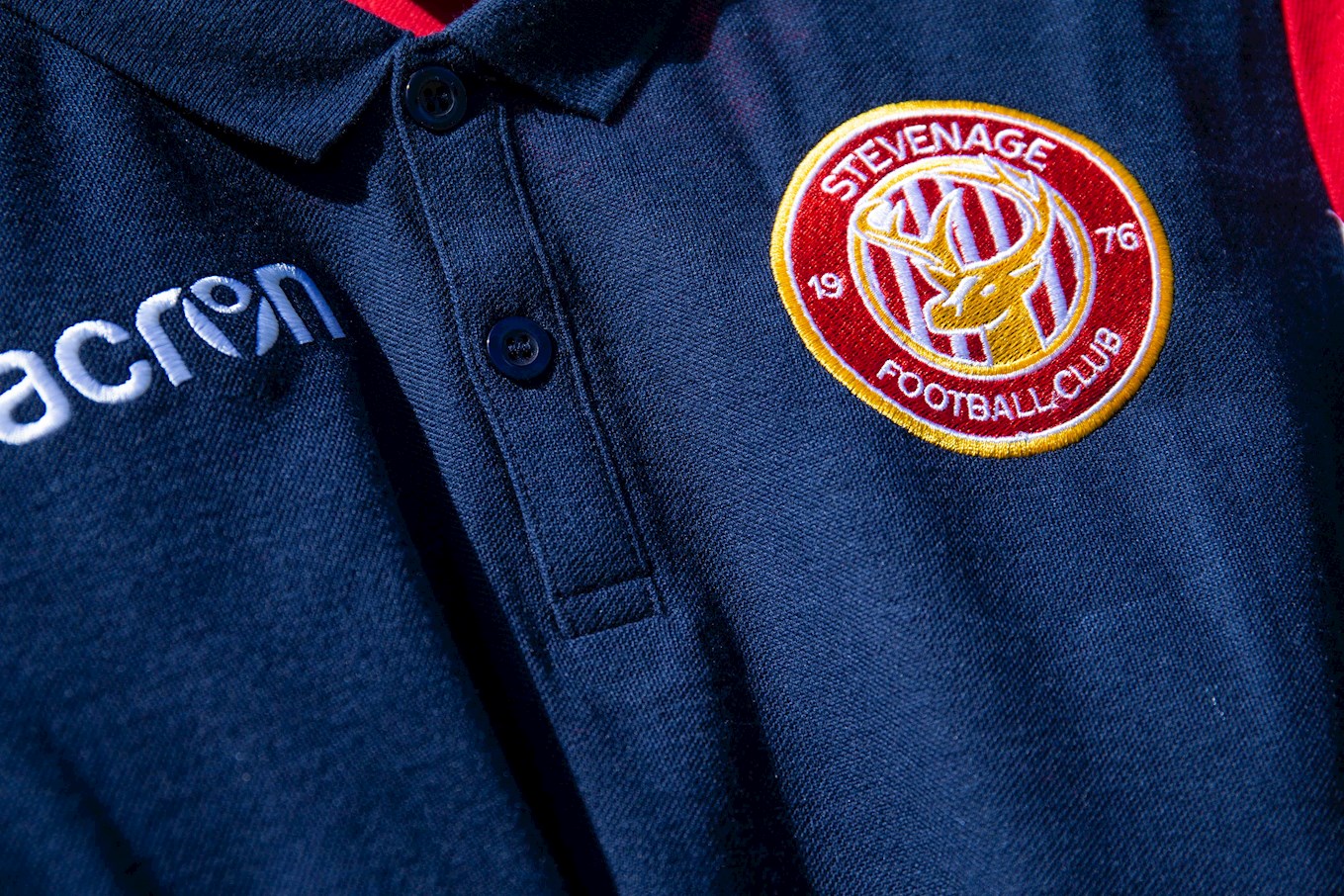 The process of replacing the former Crest across Club facilities has already started and will continue to take place over the course of the Summer.

With the Football Club currently going through a period of progressive change both on-and-off the field, after lengthy consideration it was decided that this is the right time in the Club’s history to make the switch. The current Crest has been in-use since 1996 and whilst it has featured throughout significant moments of the Club’s history, it presents modern-day challenges due to its complex and detailed design. One of the primary benefits of the New Crest is that it allows for easier replication digitally, as well as on textile and production materials, enabling the Club to create a more visible identity in the community both on a commercial and social level.

The New Crest was designed in partnership with Alchemy Creations, who have a long-standing and first class reputation in the creative sector and have worked with Tottenham Hotspur, Oxford United, Leyton Orient, Brighton & Hove Albion in the past.

See below for a full breakdown of the elements: 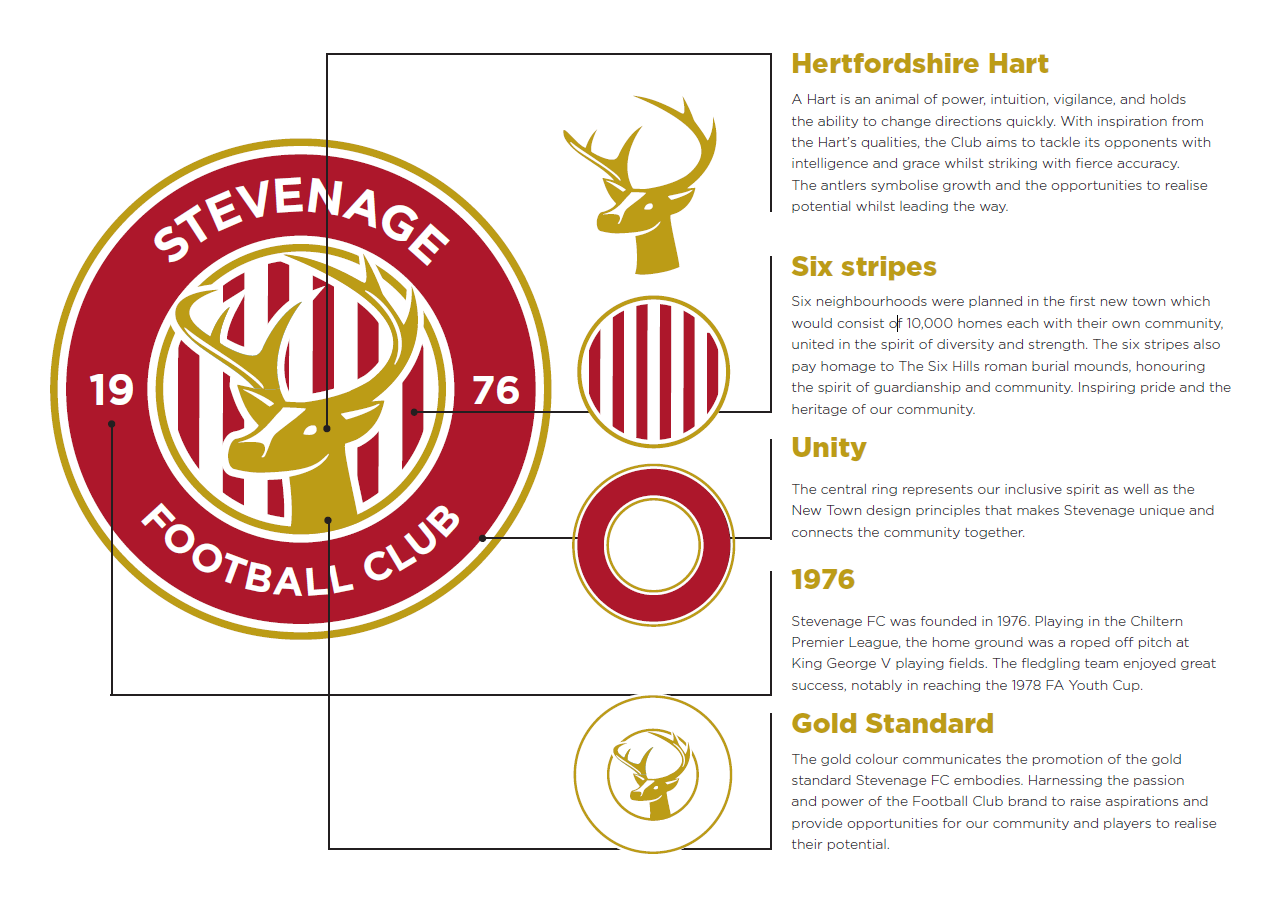 Although many of our younger supporters will have only ever known the previous Crest, the Club has changed designs on a number of occasions throughout its history. Since 1996 - the last major redesign - 79 out of the 92 professional clubs in England have made a change of Crest. 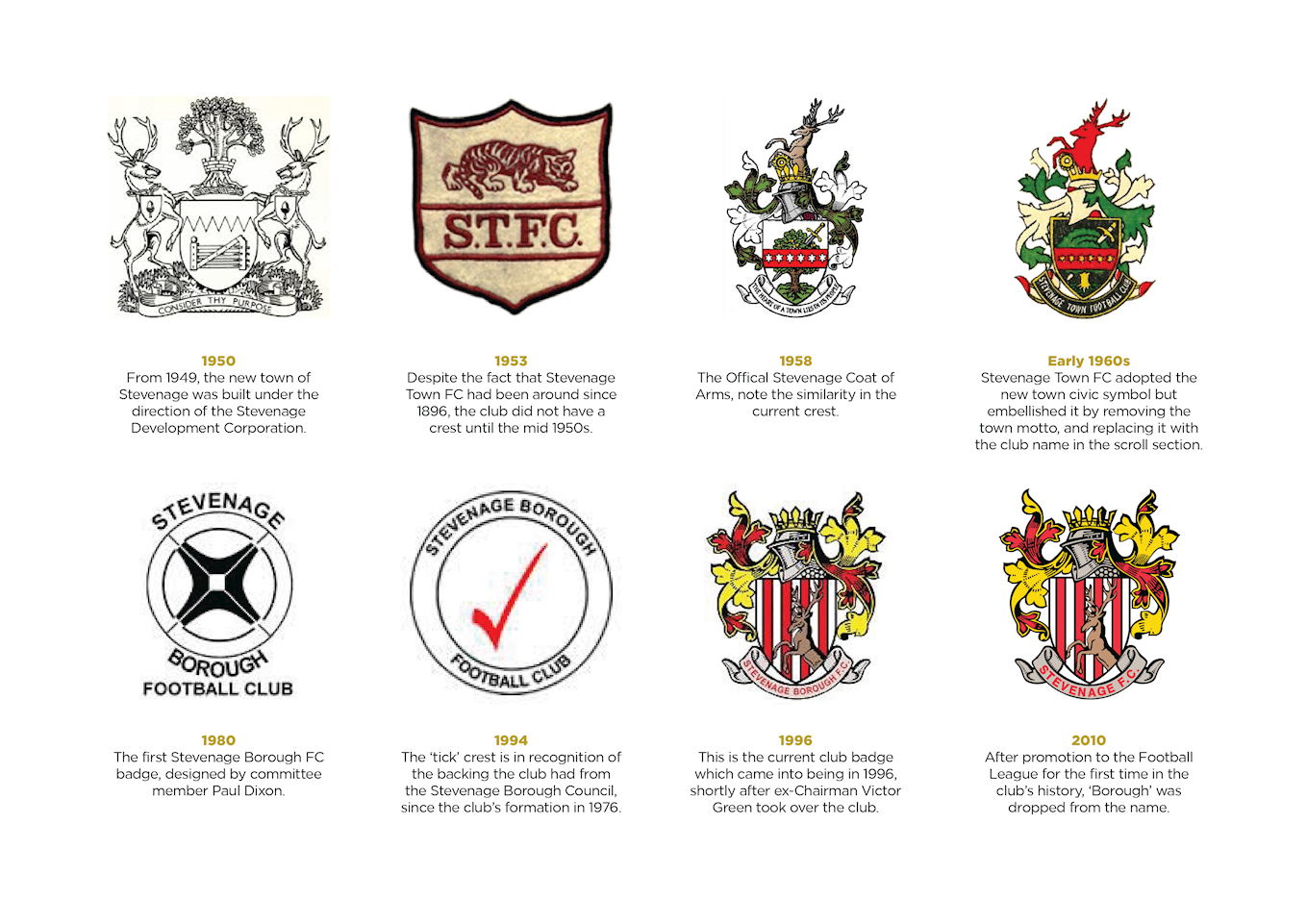 As part of the change, Stevenage FC Foundation - the Club’s Charitable Arm – will also see a change of logo to further strengthen its close working ties to the Football Club.

Speaking about the change, CEO Alex Tunbridge says, “The decision to change is one which has taken place with much consideration and care over the past year. We are progressing well both on and off the pitch and have a great desire to ensure that we reach our full potential. This is a positive step forward for the Club whilst ensuring that our history and heritage remains central to our identity. I am sure the new design will become an iconic part of the Clubs future and will feature in a period of great success.”

Stevenage FC Supporters Association Chairman Lloyd Briscoe says, “The changing of a football club’s badge can be a very emotive subject to some people. Football is tribal and supporters’ allegiances cannot be taken for granted. A club’s badge is a historic symbol which defines who we are and where we come from, so the decision to ‘update’ a club badge requires a considerable amount of thought and deliberation before subjecting the design to scrutiny.

"Our club is embarking on a refreshing and exciting period in its short history. With the construction of a brand new stand and numerous other stimulating projects underway, then if ever there was a right time to update and launch a new symbolic crest, then this would be it. Indulge it, embrace it, and grow to love it. I know I will."

Paul Millard, Co-Founder of Alchemy Creations says, "It was a real pleasure to be asked to work alongside Stevenage FC and help design the new crest. It was a lengthy but rewarding process. We worked hard to ensure we captured elements of the club, the town of Stevenage and the county of Hertfordshire. It is our hope that we have delivered a recognisable brand that both the football club and its supporters can be proud of."

Head of Stevenage FC Foundation, Joe Goude says, "The Foundation are excited to have worked closely with the Football Club on the rebrand of the crest. It is great to see a modern design with different elements reflecting parts of our community and acknowledging the history of the town, county and club. To be able to bring the club and foundation logos closer together as part of this rebrand, emphasises the strong and growing partnership between the two organisations whilst maintaining our own identity.”