Stevenage look to build on their promising cup form and progress to the Second Round of this season’s Emirates FA Cup with a win this Tuesday evening. A new era begins at the club as Academy Manager Robbie O’Keefe takes charge of the Boro team for the match after working with the players earlier in the week.

Milton Keynes Dons play their football in Sky Bet League One and currently find themselves fifth in the table. Their last two games in the league have finished 4-1 to the Dons. First, on the 30th of October they travelled to Crewe Alexandra and goals from four different goal scorers in Eisa, O’Riley, Kioso and Watters gave Dons the victory. Then, after their 2-2 draw with Boro they welcomed Cambridge United to Stadium MK and braces from both Scott Twine and Max Watters saw them win two on the bounce in Sky Bet League One.

Since August 2021, MK Dons have been managed by 36-year-old, Liam Manning. Since taking charge, Manning has been able to boast a 47% win-rate in their race to promotion to the Sky Bet Championship. Their current top goal scorer is Scott Twine with eight goals as well as getting four assists in eighteen games so far this season.

Ten days ago, Stevenage travelled to Buckinghamshire for a clash with MK Dons in the First Round of the Emirates FA Cup. Just after thirty minutes, the host took the lead through a Harry Darling header. In the second-half, Stevenage looked desperate for an equaliser but were rewarded with two goals from Brad Barry and Elliott List in the space of three minutes to go 2-1 up. However, just moments later Max Watters fired past Joseph Anang to level the game, setting up a replay at The Lamex Stadium.

Supporters can purchase their tickets in advance online at www.borotickets.co.uk, from the Club Shop, or from the North Stand Ticket Office ahead of kick-off. Prices are as follows and do not increase on the day:

Please note, the North Stand will not be open for this fixture, excluding the wheelchair bays.

iFollow offers an Audio Match Pass for £2.50 for Saturday’s game if you cannot attend The Lamex Stadium but wish to follow the action.

Match tickets for Stevenage vs MK Dons are now available from www.borotickets.co.uk. 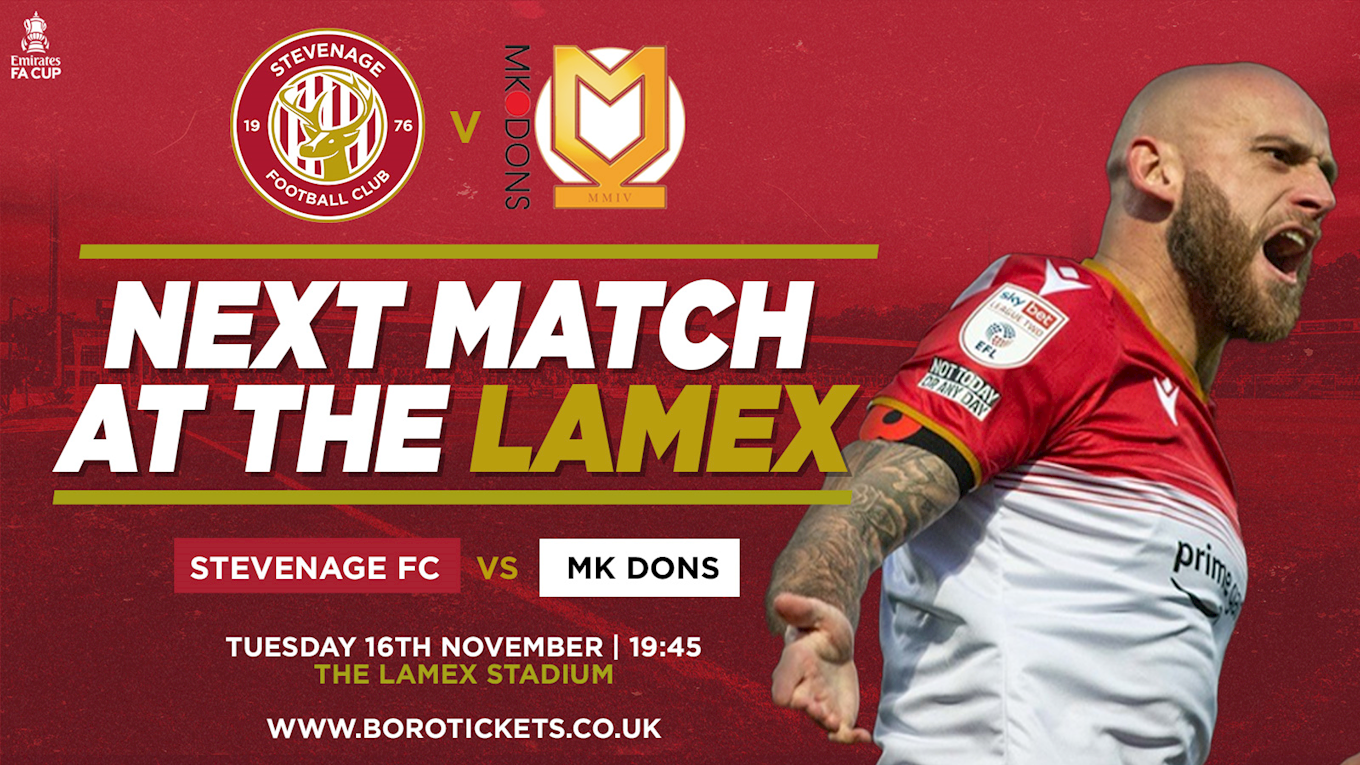