Get the latest ahead of Saturday's game on the road...

Tickets are available from either the Stevenage club shop until midday on Friday or from the Rodney Parade CASH ONLY Ticket Office at Gate 6 on Saturday. Full ticket information can be viewed here.

The SFCSA coach will be running with a strict departure time of 10:00am from the Lamex Stadium. Tickets cost £25 for members and £30 non-members. Tickets can be purchased from www.sfcsa.co.uk/home/travel or by calling John Carroll on 01438 814285.

If you arrive at the ground ahead of kick-off, check out their Family Fun Day from 1pm-3pm.

The drive will take around 3 hours from Stevenage and directions can be found below.

A convincing win at home to Barnet on Monday was the perfect way to cap off a good Easter weekend as Dino Maamria picked up his first four points of his tenure.

On Saturday he returns to Newport County to try and lead the Super Boro to a second successive win, at the club he worked at for much of last season.

Tomorrow’s opposition still have the slimmest of chances to reach the play-offs but will need a win in-order to keep that dream alive.

After the greatest of escapes last season, many will say County are playing with house money though after a brilliant season overall.

The Stevenage squad is in good shape going into Saturday’s game with just Dean Bowditch (knee) and Mark McKee (calf) unlikely to be available.

After getting through unscathed from his 15 minute cameo on Monday, Matty Godden could be ready to make a return to the starting XI as he

“It is good to see them do well this season, they have bounced back.

“I still think they have got a chance of the play-offs, so I am sure Saturday will be their last chance.

“They will be up for it, it is a tough place Newport, always has been, the fans get behind them and hopefully we can keep them quiet."

“It will be good to see Dino. He worked tirelessly for this football club and he was very good. We got on very well.

“Some of the players might be interested to see him and score a few points over him but for me, he’ll be welcomed with open arms.

“When I see somebody put in the amount of work that he did for Newport County AFC, a club I love, that’s good enough for me.” 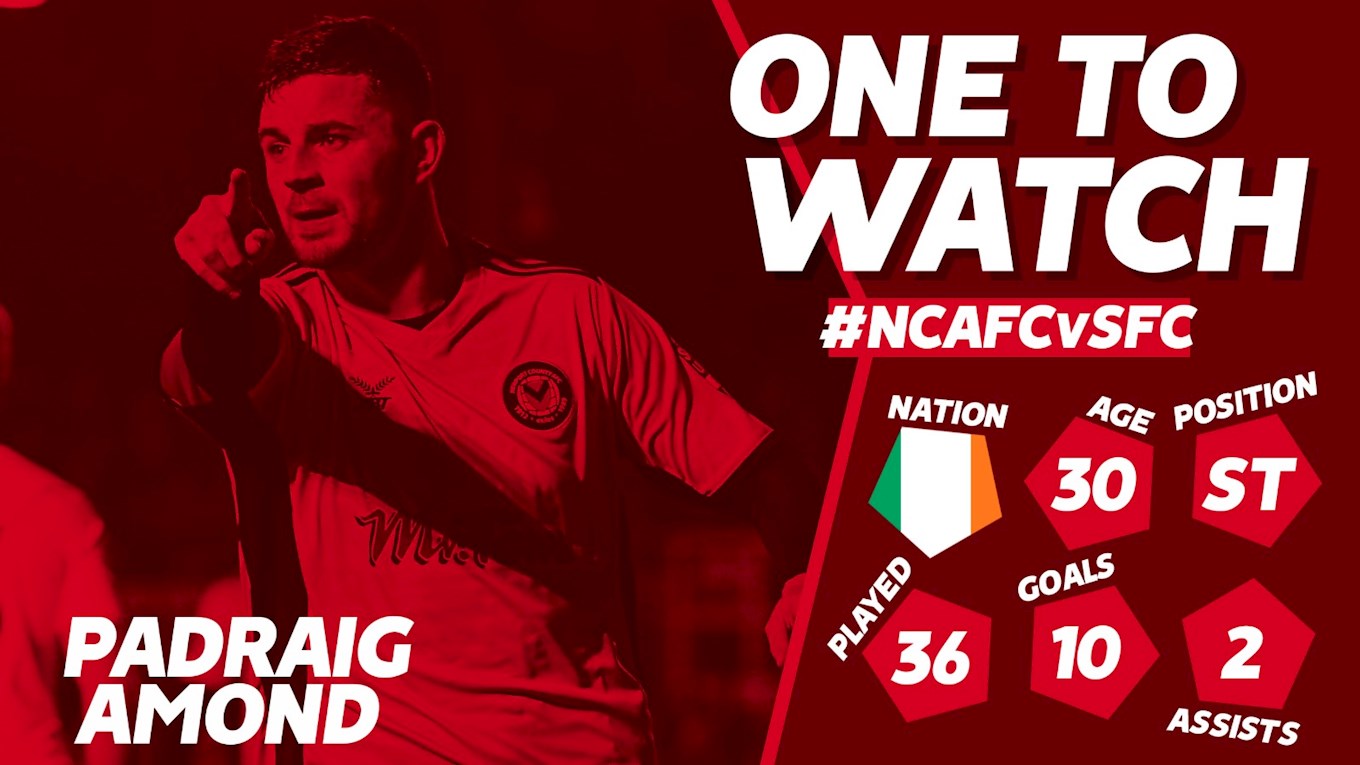 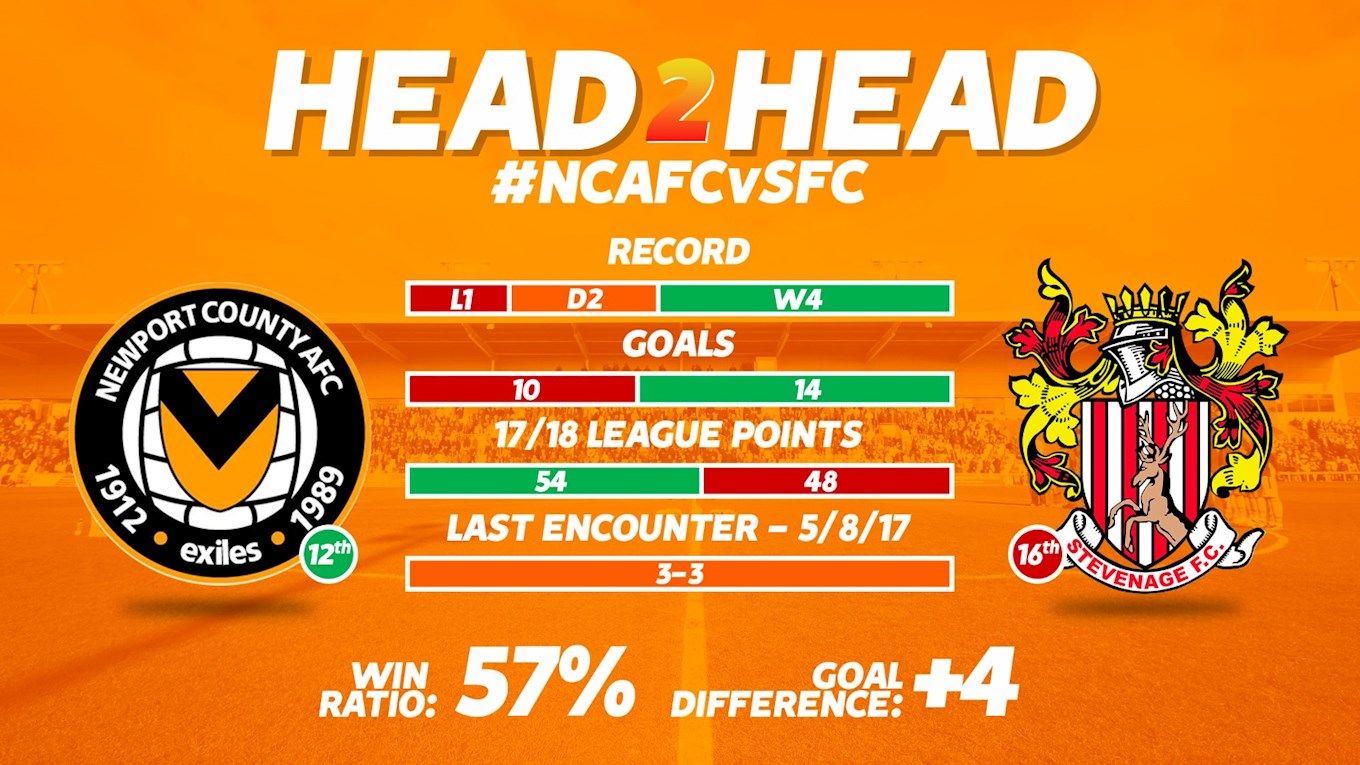 It will be a quick turnaround for Dino's boys as we entertain Mansfield Town on Tuesday Night.

Onto Tuesday Night Football at home to Mansfield...

Stevenage made it three games unbeaten and seven points out of nine, as Chris Whelpdale got his first goal of the season in a 1-0 win at Newport.

It was a classic strong away performance from Stevenage as the players controlled the contest and chances throughout.

Why change an unbeaten formula? Dino Maamria used that logic as team-sheets were exchanged with the same side selected for the third game in row. Four points from the previous two games, away at Grimsby and at home to Barnet providing a solid base for the new manager to work with.

The Stevenage boys got off to a fast start as they harried and hustled their way around Rodney Parade, putting pressure on the Newport goalkeeper and defence early on.

Luke Wilkinson was the first to cause panic at the back for County as he beat keeper Joe Day to Martin’s free-kick, but his flicked header just fell the wrong side of the post.

With Danny Newton and Alex Revell leading the line, Stevenage went the aerial route to look for an opener and it was an approach that seemed to be working.

Newton had the goal at his mercy after Day missed his punch but the striker’s contact wasn’t ideal and it was hooked off the line.

Newport had a few chances of their own and should have took the lead themselves when a untimely pass to Wilkinson put the centre-back under undue pressure, before being robbed of the ball.

Fortunately as the ball came into Amond - just 10 yards out - his finish flew over the bar and into the terrace.

The second big Newport chance came when Robbie Wilmot curled high and wide from the edge of the area, after some nifty footwork by Collins to split two defenders before picking out the pass.

But it was Boro who looked the most likely to score and Newton saw his second goal-bound shot cleared off the line, after another failed Day clearance fell to the striker, who took his time but couldn’t find a way past Mickey Demetriou who was ready and waiting.

From the resulting corner, Luke Amos forced Day into action as the ball fell to the Spurs loanee who sorted out his feet quickly before being thwarted by the keeper.

Just as it looked as though Stevenage would have to settle for a goalless first half, Chris Whelpdale stepped up for his first goal of the season as he headed in Ronnie Henry’s cross towards the back-post. Good play from Amos in the build up as he waited for the captain on the overlap who put it in the perfect place.

Just rewards for a high tempo first half from Dino Maamria’s men.

It was so close to a blockbuster start to the second half as Newton let off an outrageous volley which had Day scrambling before palming away for a corner.

Newport fans were soon calling for a penalty after Frank Nouble went down under Ben Sheaf’s challenge. The referee wasn’t impressed though and Ollie Yates went onto irate the home support further, by turning down a couple of handball claims over the next five minutes.

County would start to pile on the pressure though and Ben Tozer had a good opportunity to draw his side level as he headed over from a Newport corner.

With 25 minutes to go, Stevenage had a golden opportunity to open up the advantage. After Joe Day came flying out of his area to clear the ball, he miss-timed his challenge and the ball came down to Kennedy.

With the keeper out of his box and just a couple of defenders between him and the goal, Kennedy played it inside to Whelpdale who rather than going for goal, went to pass the ball towards Revell it had just too much on it.

Dale Gorman came on for Ben Kennedy to try and shore up the midfield and another Newport penalty appeal was soon turned down, much to the relief of the 102 Stevenage supporters who made the long trip down.

As the game came towards its conclusion, another wave of Newport attacks had to be stemmed as David Pipe fired his half volley wide but it was all rather comfortable for Stevenage as they managed to keep the Exiles at arms-length throughout the game.

Newton had the final chance to kill the game off as he tried to flick the ball over Day, after a smart ball through over the top of the defence. Just too much on the effort as it floated onto the roof of the net.

Matty Godden got some more minutes in him as he came on for Ben Sheaf and Stevenage were able to see out the rest of the game and post a first road win under the new boss.

Stevenage fans can purchase their tickets for our trip to Newport County taking place on Saturday 7th April, 3:00pm kick-off.

Ticket prices do not increase on matchday, but fans are still advised to purchase in-advance from the club shop or online at borotickets.co.uk.

Students must have a valid NUS card and/or proof of education to qualify. Under 6s must be accompanied by a full paying adult or senior and must be bought in-advance from the club shop.

Disabled supporters pay the appreciate age category and should arrange details by calling the Newport County ticket office on 01633 481896.

A Carer ticket is free of charge, however to apply for a free carer ticket you must provide a Doctor’s letter stating the need for a carer.

The SFCSA coach will be running with a strict departure time of 10:00am from the Lamex Stadium. Tickets cost £25 for members and £30 non-members.

Tickets can be purchased from www.sfcsa.co.uk/home/travel or by calling John Carroll on 01438 814285.