Tickets are available at advance prices until midnight on Friday at borotickets.co.uk or 5pm on Friday from the club shop.

Matchday tickets are also available from the turnstiles or Ticket Office for both Stevenage and Chesterfield supporters.

Spireites - take a look at our Away Fans section of the website ahead of tomorrow's game.

Saturday's game is our Bring a Friend fixture where Season Ticket Holders are encouraged to bring along a family member, friend or colleague free of charge! Info here.

Copies of Free-Kick! will be available to pick up from the Broadhall Suite or Club Shop ahead of the game. Alternatively, download your copy here.

Stevenage’s run of league games without a win stretched to 8 games after last Saturday’s disappointing trip to Exeter. Despite the poor form, comfort can be taken from our recent record at home - unbeaten in the last five games at the Lamex across all comps, with 3 wins and 2 draws.

Nevertheless, the need for a Sky Bet League Two victory is obvious and a strong end to 2017 would go a long way in repairing some of the damage and lifting everybody's spirits.

Chesterfield are enjoying a resurgence under new gaffer and club legend, Jack Lester.

Prior to his appointment, the Spireites had only picked up 5 points from their opening 10 games. Since becoming boss, Lester has seen them pick up 15 points from 12 games.

Despite that, due to the nature of their start, it hasn’t been enough to lift them out of the relegation zone as they sit level on points with Forest Green and Barnet.

Darren Sarll has no new injury worries ahead of tomorrow’s game with all the lads making it through last Saturday’s game without concern.

After making his first appearance since his operation in early November, Ben Kennedy could be in contention for a place back in the starting XI.

“The players are as desperate as anyone would ever be to try and holt that and we have a real terrific chance to try and remedy the situation.

“You can’t just walk around like a bear with a sore head, being negative and grumpy. I don’t think I want to live my life like that and I don’t really want to be that person.

“The players are told, shown and then we have to move on to the next project which is Chesterfield."

“Sam Hird hasn’t trained today (Thursday), he’s got a tight hamstring, while Robbie Weir has tonsillitis. There’s a couple of things going on that we could do without.

“What you normally do is go into these games with a 24-man squad, though we haven’t got that. What we will do is pick a side that will be good enough to win the game.

“They’re a good side, we’ve seen a couple of their games and they’re probably not quite as direct as Wycombe as in having that outlet of a front man, but there’s one two areas that we think we can hurt them so we’ll be looking at that.”

Saturday’s match will be only the fifth meeting between the two sides, with Stevenage yet to record a win.

Across the four games, there have been three draws including on our last meeting, back in 2012 when Scott Laird and Craig Reid found the net in a 2-2 draw. 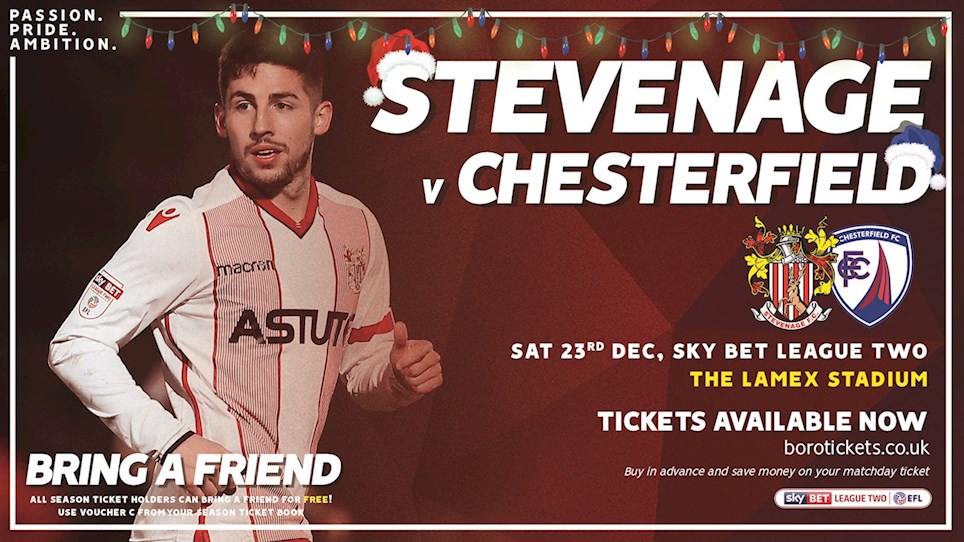 Join us this Saturday for a critical Christmas clash with Chesterfield

Back to winning ways..

Stevenage romped to a 5-1 win at the hands of Chesterfield as Darren Sarll’s men came up with a Christmas cracker just two sleeps before the big day.

With a last league win coming towards the back end of October, Saturday’s entertainment was the perfect early Christmas present for Stevenage fans, players and staff alike.

The usual suspects were involved in the goals – Danny Newton and Matty Godden both with braces whilst Dale Gorman scored his second of the season in what was the team’s best performance of the season to date.

Darren Sarll made three changes to the side that lost at Exeter the previous weekend with Dale Gorman, Danny Newton and Terence Vancooten all recalled to the XI. There was also a change in formation as the team lined up in a 4-3-3 with McKee, Smith and Gorman playing in the middle.

After a McCourt volley that flew over just a minute or so into the contest, it was all Boro for the majority of the first half as chance after chance would come a red and white shirt way.

Alex Samuel was the first to make an impression inside the Chesterfield area – rolling his man before firing into the side netting.

The post came to Chesterfield’s rescue 5 minutes in as Matty Godden’s close range flick was saved by Eastwood before rolling up and onto the bar.

It was Godden again just moments later, blasting over from 6 yards out after the ball fell kindly to him inside a crowded box. It felt a matter of time before the scoring would open as Stevenage bombarded the Chesterfield area.

There was aggression all over the pitch from the Boro players, winning the ball high up the pitch and pressing from the front.

With 12 minutes on the clock, the deadlock was finally broken as Danny Newton turned home Alex Samuel’s cross to make it 1-0.

The game continued the same pattern right until Dale Gorman, on his return to the team, made it 2-0. Bursting through from midfield, the Northern Ireland international picked up the loose ball before calmly rolling it past Eastwood in goal.

Having created virtually nothing all game, Chesterfield began to press as the game approached half-time. Ronnie Henry was in position to provide a crucial double block on the goal line before Joe Fryer was on hand to make a quick fire double save.

Unable to stem the tide, those minutes of madness came back to bite Boro as Dennis headed in on 41 minutes to make it 2-1.

Despite the setback, the Super Boro went right up the other end and thanks to a kindly deflection on Danny Newton’s cross/shot, it was 3-1 before half-time.

With a two goal lead, the next one was always going to be vital. Joe Fryer came up with the same of the match minutes into the restart as he palmed away Rowley’s stinging strike from just 8 yards out.

That save only became more crucial in the following exchanges as Matty Godden got in on the act to make it 4-1. Latching onto Vancooten’s long punt upfield, Godden streaked away from his marker before applying a trademark finish into the bottom corner.

With a comfortable lead, Darren Sarll’s men continued to push and make life difficult for the visitors. Both Danny Newton and Matt Godden were denied by Eastwood as Boro went looking for more.

Alex Samuel came off to a fantastic reception as he was taken off for Ben Kennedy and it didn’t take long for the recently recovered Stevenage starlet to make his mark.

Receiving the ball out on the right, he took it past a couple of Chesterfield players before sliding the ball through for Godden to score his second and Stevenage’s fifth.

That would be Godden’s last action of the game as youngster Jamie Gray came on to replace him and with just 5 minutes to go, Danny Newton came a balls width away from his hat-trick after Kennedy played him in on the break.

Not to worry though, Boro would hold out to record their biggest victory of the season ahead of two consecutive away trips over Christmas.

Join us this Saturday for a critical Christmas clash with Chesterfield

This is the first of two Bring a Friend fixtures during the season, the second of which will be announced in due course.

We want as many new faces in the ground as possible for this festive fixture so please take advantage of this deal and introduce the club to a friend, family member or colleague.

It couldn’t be any simpler - Season Ticket Holders can bring a fan of any age. No restrictions, no barriers, just a nice simple way of bringing someone new along.

Voucher C in your Season Ticket Book is the magic way of redeeming this offer and West Stand Season Ticket Holders are advised to book in-advance from the club shop.

This will help guarantee your guest the nearest possible seat to yourself.

Those on the terraces can simply turn up to the turnstiles with their friend and present Voucher C.

It's not too late to order a Half Season Ticket & Bring a Friend on the 23rd - click here for full details.

So get behind the boys and spread the good word of Boro to somebody new this holiday period.