All the vital info ahead of Saturday's big game...

Saturday’s game is an ALL-TICKET fixture and therefore, all tickets must be bought in-advance.

Sales ended at midnight on Friday at borotickets.co.uk or from inside the club shop at 5pm on Friday. Click here for the latest ticket info.

Luton Town have SOLD OUT their entire allocation and therefore no remaining tickets are available for Hatters.

Turnstile 21 (South West corner) will be for Luton fans ONLY. All home supporters in the West Stand will need to enter via the North side of the ground through turnstiles 1-4.

Search procedures will be in operation outside the East Terrace (home fans) and South Stand (away fans).

Take a read of our First Time Guide, aimed at providing all the vital information for first time home AND away supporters.

The Broadhall Suite will be open to HOME FANS ONLY from midday – a matchday ticket/season ticket/SA card will need to be shown on entry. More info here.

After a good start to 2018, back-to-back defeats against Swindon and Accrington have seen Stevenage fall away from the play-off race with 15 games to go in the season.

There is still time to make a run but the aim is now to get back into the top half of the table and establish our place there.

Saturday’s defeat at Accrington was a bitter pill to swallow for Darren Sarll’s side after an improved performance for much of the game went to waste.

New signings, Johnny Goddard, Luke Amos and Alex Revell all started the game and impressed the eye on their full debuts.

Luton meanwhile are flying at the top of the league and are well on their way to achieving their pre-season aim of promotion.

The Hatters are 8 points clear having won 19, drawn 6 and lost 6 from their 31 games played.

They have the second best away record in the division, (after Swindon) with 7 wins, 5 draws and 3 defeats.

Joe Martin, Ronnie Henry and Ben Kennedy’s chances of featuring at the weekend are all viewed as 50/50 as they aim for a return to full fitness.

Alex Samuel and Chris Whelpdale are both out of contention but overall, the squad is in good shape following the close of the January Transfer Window.

“You are playing for a little bit of justice in your local area so it is a big game and I really look forward to it.

“I went into the Kenilworth game really looking forward to it. I did not enjoy leaving there, but I go into this game enjoying it, hoping there is a really big crowd.

“You do not forget so I think it is very natural as a human being to find that extra after, because it was a tough time, a really tough time and we spoke about it as a group of players then and we have spoken about it now."

"We have always had difficult games there. There are no easy games and Stevenage will be a very tough game, we know that, but i imagine they are preparing for a tough game too.

"We have put ourselves in a wonderful position and all we can do is concentrate on what we do. If we got enough points, it will be very difficult for enough sides to catch us."

The humiliating 7-1 defeat at Kenilworth Road in October was a low point of the season as the Hatters piled it on in against an under-performing Stevenage side.

Previous results against Luton had been good – three wins in a row prior to the fixture game including two wins at Kenilworth Road.

Ben Kennedy has been Luton's main protoagnoist in recent years, with two goals and an earnt penalty in his last three appearances against the Hatters. 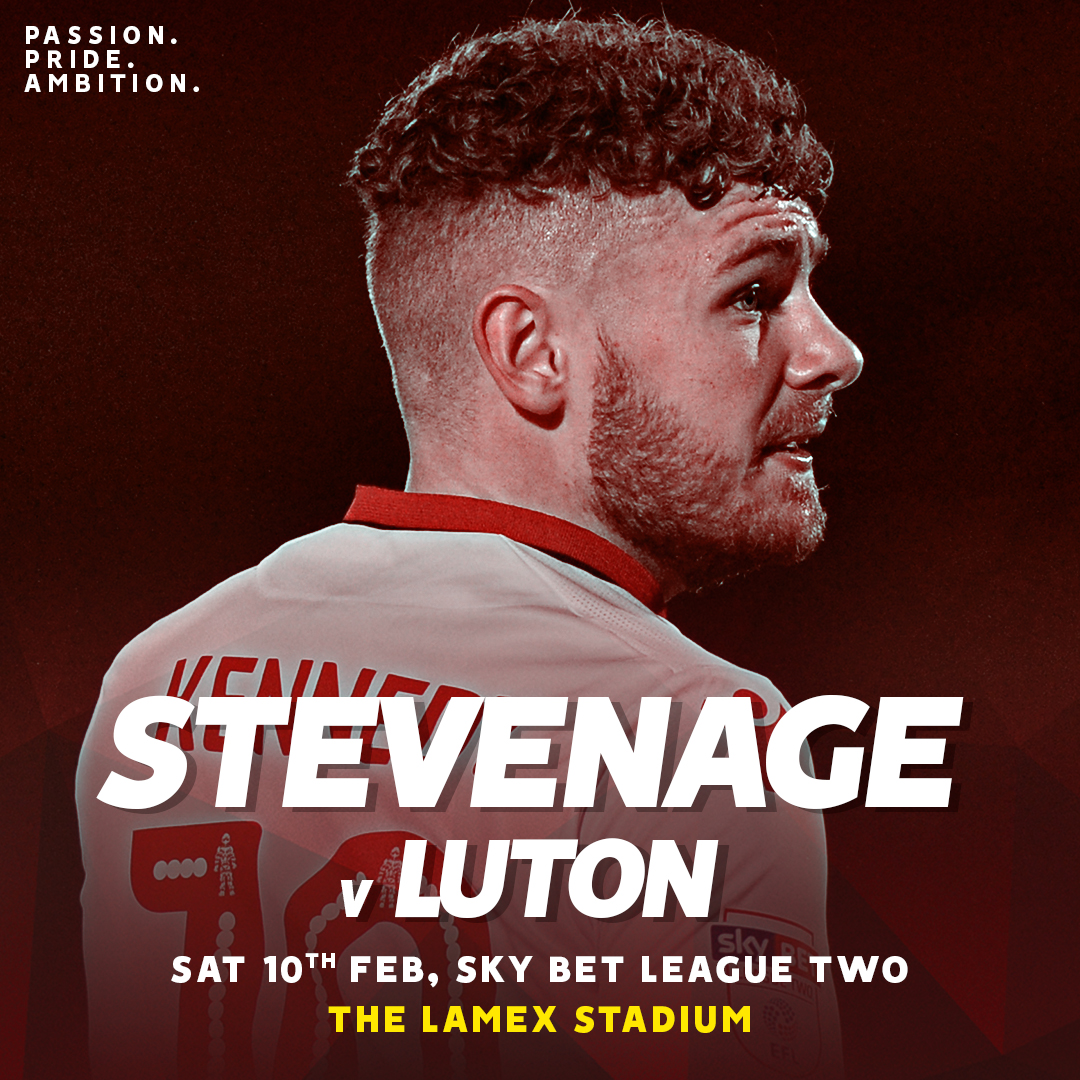 James Collins’ penalty looked to win it for the Hatters with less than 10 minutes left in the contest, but the Super Boro rallied and Danny Newton headed in late to even things up with just minutes to go.

It was the least that Stevenage deserved after a strong performance, especially in a gripping second half.

Darren Sarll made just the one change to the starting XI from last Saturday’s defeat, as skipper Ronnie Henry returned to the side.

There were two Stevenage home debuts including veteran striker Alex Revell and creative spark Johnny Goddard, who both joined the side in late January.

Both teams appeared well up for the contest during the early stages as the game was played at a high tempo. With the two sets of fans eagerly behind their teams, the game was full of commitment and plenty of energy.

Jonathan Smith had the first chance in the 11th minute for Stevenage, as his close range effort just went over the bar after latching on the end of Mark McKee’s free-kick.

New boy Alex Revell caused all sorts of problems for the Luton defence, both in the air and on the floor, as the 34-year-old refused to stop chasing down any loose balls.

Luton's Jervis had the first clear-cut chance of the game in the 30th minute, when the ball fell nicely to him from a set piece, but his effort went well over the bar from inside the box.

Finding the opening through ball proved to be difficult for Darren Sarll’s men, despite continuous good work in and around the box by the Stevenage forwards.

The clearest chances came to Luton and Jake Jervis had a second opportunity to give the visitors the lead, after Harry Cornick broke free down the right flank and crossed into the box.

Boro's first sub of the game came earlier than planned, as Jack King made way for Fraser Franks, after a collison with one of his own teammates forced him off.

The Hatters enjoyed the better of the first half but with little in it, the game went into the break at 0-0.

Stevenage hit the ground running in the second half, with an early chance as Alex Revell’s flicked header just narrowly looping  past the post in only the 46th minute.

Just minutes later the boys were at it again, with Johnny Goddard twisting and turning his way into the box to play in Alex Revell, but the forward failed to get the right connection in front of goal.

Darren Sarll’s half-time team talk certainly seemed to lift the boys as they started the second half by far the better team and giving the visiors plenty of scares at the back.

First half threat Jake Jervis was the first substitution for the visitors, as Andrew Shinnie replaced the wide midfielder in the 59th minute.

Stevenage continued to push and test the stubborn Luton defence, but kept failing to find the end product in the final third of the pitch.

Luton grew back into the game after a slow start to the second half, but failed to get through the Boro defensive line on numerous occasions as young Ben Wilmot was sweeping up any fallen balls.

Stevenage made their second change in the 71st minute as Luke Amos came off for Ben Kennedy.

Revell had a great chance to give Boro the lead as he came inches away from heading in Franks' flick-on following a Mark McKee free-kick.

Johnny Goddard continued to weave his way around the Luton defenders and got himself into a good shooting position in the 75th minute, but his effort was blocked.

Darren Sarll played his ace with 10 minutes to go as Danny Newton came on for Matty Godden but it was all soon to turn sour.

Against the run of play, the Hatters were awarded a penalty in the 82nd minute after James Collins was deemed to have been brought down by Ronnie Henry, after a loose ball was latched onto by the striker.

Despite strong appeals from the Stevenage players, the decision was made and Collins sent King to the wrong way to make it 0-1.

Minutes later, Stevenage were finally rewarded for their hard work as Danny Newton rose above the rest to convert fellow substitute Ben Kennedy's corner, to send the Lamex into raptures and bring the score back level.

It was almost a dream finish as Boro continue to push, Mark McKee sending Ben Kennedy through on goal who finised with aplomb, only to see the offside flag up.

In the end, Stevenage took away a point from the league leaders after an enthralling game of football at the Lamex Stadium.

Stevenage supporters have until 5pm in the club shop or midnight online to secure their place for Saturday's (10th February 2018, 3pm) derby at home to Luton Town.

The game has been designated ALL-TICKET, meaning supporters will NOT be able to pay on the day.

There are very limited seats available for home supporters in the West Stand whilst Luton Town have sold out their entire allocation.

Only fans with prior purchasing history will be able to buy online.

Prices:
West Stand (seating):
East Terrace (standing):
Please note that there is no limit to the number of tickets that can be purchased and there will be no telephone sales.
Season Ticket Holders not requiring any additional tickets for this game are not required to purchase their own seat or get a new ticket - simply turn up at the turnstiles on the day with your Season Ticket books as usual.
All ticket sales will be recorded so names, addresses and telephone numbers will be requested when bought in-person.
---


Don't miss out on our all-ticket game...

Luton tickets on sale from Thursday at 1pm