Tickets are available at advance prices until midnight on Friday at borotickets.co.uk.

Matchday tickets are also available from the turnstiles or Ticket Office for Stevenage supporters ONLY.

Reading have sold out their entire allocation and therefore, supporters are advised NOT to travel unless you have a ticket.

Please be reminded that tomorrow's game is our FINAL one with the old North Terrace. There will no crossing into the stand from other sections of the stadium. More details here.

Royals - take a look at our Away Fans section of the website ahead of tomorrow's game.

Stevenage go into Saturday's tie with some much needed added confidence thanks to a 4-1 win at home to Chesterfield on Monday.

Form at home has been good in recent months, with no defeat since October and three wins from the last four, including 14 goals scored in those three victories.

Boro are one of the top scorers in the FA Cup this season too, with 10 goals scored from the first two rounds. A 5-1 win against Nantwich was followed up by a 5-2 win at home to Swindon, setting up this Third Round tie.

We also have arguably the leading player in the competition so far, Matty Godden with 4 goals & 3 assists - the most goals contribued by any single player.

Reading meanwhile are currently on a down-year as they sit 18th in the Championship, just two points above the relegation zone.

After last season's visit to Wembley in the Play-Off Final, it goes without saying that the first half of the season has been a disapointment.

Royals boss, Jaap Stam may therefore make a number of changes to his usual side tomorrow, hoping that a younger side will be enough to secure progression.

Darren Sarll should have a healthy bunch of players to pick from tomorrow with Terence Vancooten the only known absentee - still out after suffering a broken cheekbone at Lincoln.

“It has been a while since we have had a proper Third Round cup tie and it is one we are very much looking forward to.

“Wee have been really positive and scored a lot of goals at home of late.

“If you play in the FA Cup, these games are always difficult – especially if you’re away from home,” said the Royals boss.

“People might expect that Stevenage will be an easy game, but it won’t be – we’ll need to work hard against them to get a result.”

Tomorrow's game will be the third time the two sides have faced each other in the competition since 2010/2011, both sides with a win each. 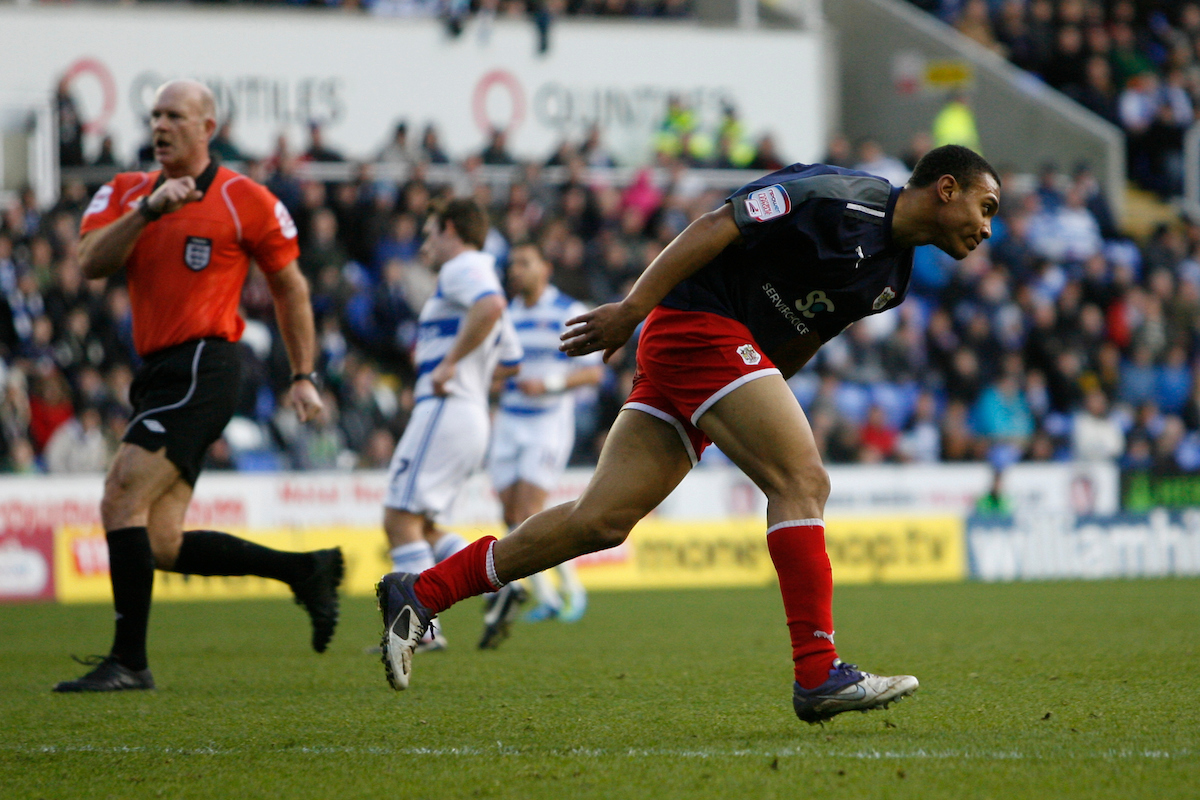 Live match commentary will be available for this game so make sure you subscribe to the new Stevenage iFollow service.

Due to broadcasting rights, the game will NOT be available for overseas fans to stream via iFollow.

Stevenage put in a superb performance at home to Reading on Saturday, earning a goalless draw that means a Third Round FA Cup replay at the Madjeski Stadium.

Boro were the better side for much of the contest and on another day, would have surely come away with the victory.

Darren Sarll named two changes to the side that blew Cheltenham away 4-1 earlier in the week. A first start for Tom King in goal whilst U18s Scholar, Ben Wilmot was handed his first start in competitions outside of the Checkatrade Trophy.

The selection meant that three players from the Stevenage Academy started (Wilmot, Kennedy, McKee) whilst two more began on the bench (Gorman, Gray).

Despite the opponents lofty Championship status, it was Stevenage who got off to the better of starts and could been ahead inside the opening ten minutes.

Ben Kennedy and Danny Newton both had opportunities to make it count in the air during the early exchanges but Kennedy’s header was deflected over whilst Newton couldn’t keep his down.

The Royals were intent on playing it out from the back and Boro almost caught them out early on as Tom Pett forced McShane into a mistake. The play ended with Jonathan Smith getting away a deflected shot from the edge of the box which spun agonisingly over the bar.

Crosses into the box were causing the Royals headaches and with just under 15 minutes gone, the ball ricochet off a Reading leg towards goal, only for it to be cleared off the line.

Ben Kennedy was clearly feeling fit and looking back to his best. The young star stole the show during the first half as he twisted his way around the Reading defence and midfield. With 25 minutes on the clock, he came inches away from finding Newton with a deft ball over the top, just out of reach of the striker.

It was almost the dream FA Cup start for young Ben Wilmot as he forced Jaakkola into a fine scrambling save to tip his header over the bar. Boro were continuing to force corners and dangerous ones at that.

Reading created virtually nothing all half but could have found a breakthrough after 35 minutes as Barrow robbed Jack King of the ball and had the chance to counter. As Reading had a 3 on 1 opportunity, McCleary fouled McKee off the ball, rendering the attack dead.

As the clock ticked down towards the break, Kennedy would have one more chance to create the opening goal. Picking up the ball after a loose Reading pass on the half-way line, the winger drove up the pitch, taking it past his man before firing in a low, powerful shot into a crowded area that needed just a touch towards goal.

With 5 minutes left before the half, Reading upped the ante and had their best spell of the contest so far.

Tom King introducing himself with a superb save to deny Dave Edwards from a corner, the Reading man attacking the ball at point blank range before it was cleared away.

McCleary fired over from the edge of the box with a few mins to go but Stevenage were able to see out the half as the teams went in all square.

The second half began much like the first, with Stevenage on top and creating the better of the opportunities. Danny Newton came a couple of yards away from firing in a spectacular opener inside the first five minutes as he hit a dipping volley beautifully, just past the post.

Reading remained a threat on the break and Ronnie Henry was needed to stop Liam Kelly down the other end as the Reading attacker had a one-on-one opportunity following a swift counter.

The away side’s star man was undoubtedly keeper, Anssi Jaakkola as he made two spectacular stops within the space of five minutes in the second half. First, beating the ball away from the top corner after a pin-point Joe Martin free-kick before denying Jack King’s stupendous volley off a Danny Newton knock-down.

With just twenty minutes to go, the hosts again began to settle down and experienced frontman, Yann Kermorgant had half a chance to put the Royals in-front. Latching onto a good ball into the box, he couldn’t quite keep it under the bar.

Alex Samuel made way for Ben Kennedy on 72 minutes and a few minutes later, Danny Newton had Jaakola making more saves as he drove forward before firing hard and low.

Ben Wilmot was enjoying a superb afternoon at the back and was needed with 15 minutes left as Barrow was played in over the top. The young defender back quickly to make a last-ditch challenge that surely denied a goalscoring opportunity.

Although Reading sporadically threatened to break through late on, a Stevenage defender was always on hand to come across and block out the danger. A fine defensive effort from the team all afternoon.

Neither team created any clear-cut chances of note during the closing stages as the game ended 0-0 - a fine result and performance from Stevenage as the two sides meet again in a few weeks time.

After Monday's 4-1 win over Cheltenham, attention now switches to the FA Cup as Darren Sarll and his players prepare for a big Third Round tie at home to Reading.

Form at the Lamex Stadium has been fantastic recently, with 3 wins out of 4 including victories of 5-2, 5-1 and 4-1 since the start of December.

The FA Cup is a hugely important competition to the club and we will need your support on Saturday if we are to make it into the Fourth Round.

Please also be reminded that this will be the last chance to watch from the North Terrace. Details here. 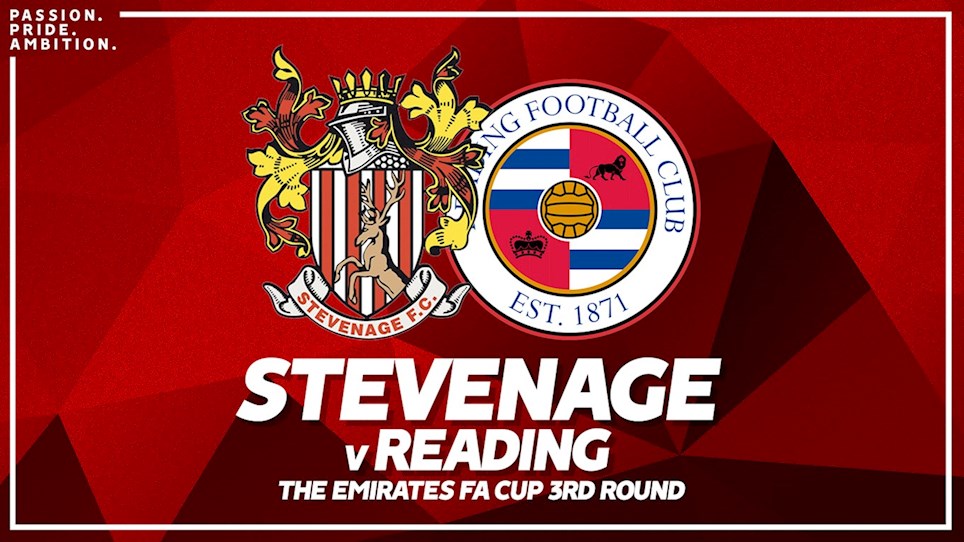 
Tickets are now on sale for Stevenage's FA Cup Third Round tie at home to Reading on Saturday 6th January 2018...