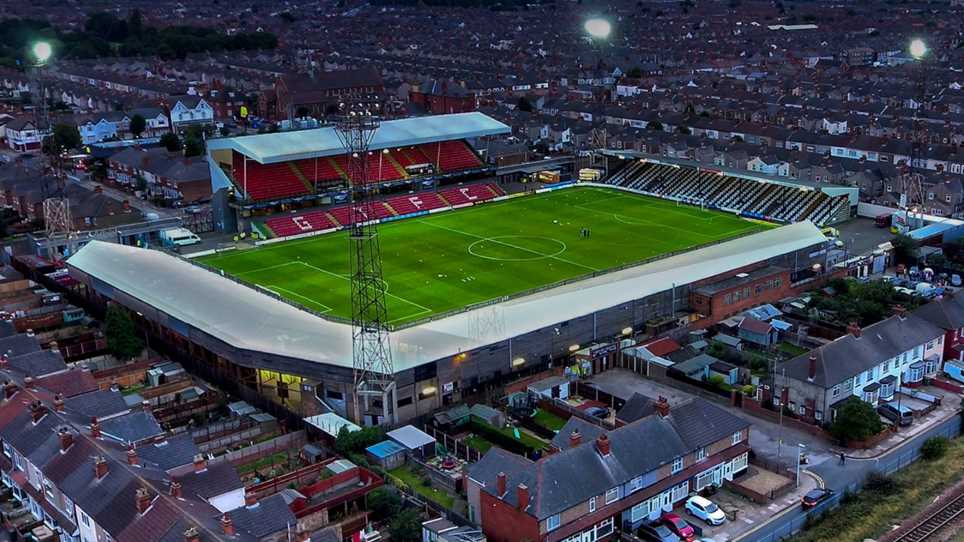 
Stevenage to face Grimsby at Blundell Park on Easter Friday...

Onto Monday's derby at home to Barnet...

Stevenage picked up a first point under new boss, Dino Maamria as his side battled their way to a goalless draw in Grimsby.

With the stakes for the home side particularly high, Boro did well to ensure they left without defeat.

In his first away game in charge, Dino Maarmia rang the changes as Kennedy, Sheaf and Amos all returned to the side for Goddard, McKee and Smith.

Stevenage started the game on top, looking to make some early in-roads against the side without a win in 18.

Just two minutes in, Luke Amos broke clear of the Grimsby defence down the right but when he tried to pull the ball back for Kennedy, it was just behind him, meaning a skewed effort on goal and a big chance gone missing.

Danny Newton was making himself a nuisance to the Grimsby back four and could have put Boro into the lead on 14 minutes, as he worked the space for a shot inside the box but McKeown got down well to deny the Stevenage man.

From that point, Grimsby would go on to create the better chances of the first half as they desperately tried to wrestle themselves away from the dreaded drop zone.

With 15 minutes on the clock, the hosts should have gone ahead. A loose ball across the back by Wilkinson was collected by Hooper who drove towards goal before finding Wilks, who conspired to miss the target from 10 yards out, largely due to Jack King’s hustle to get back and put pressure on the striker.

Shortly after Sikiri Dembele forced King into a fine stop from distance, after splitting both Sheaf and Amos out wide before cutting in and striking towards goal.

It was a period of the game that Stevenage had to see out, as Mills and Rose both missed gilt edge opportunities from inside the box within a matter of seconds.

Stevenage began to settle down again though and Kennedy was next to test McKeown. Similar to Newton’s effort on 14 minutes, his shot was low and hard but not troubling the goalkeeper.

Perhaps the moment of the match came on 37 minutes though as former Boro man, Andrew Fox went galloping down the left wing all the way to the by-line.

He managed to find a spare man at the back-post but Joe Martin was in the right place at the right time to clear the danger off the line.

Ronnie Henry was replaced at half-time by Fraser Franks as the Captain struggled with a knock he picked up during the first half action.

There were less opportunities throughout the first half to the second half as both sides appeared to briefly cancel each other out.

Dean Bowditch replaced Ben Kennedy who had just came back from a busy week away with Northern Ireland U21s as tension was rising around Blundell Park.

Bowditch made an immediate impact, a fine ball into the box caused all sorts of chaos as the ball was recycled before hoisted in one more time.

Whelpdale’s header crashed off the bar and across the line where it was eventually cleared by a frantic Grimsby defence.

Grimsby’s Danger man, Dembele fired over after setting himself nicely from 20 yards and the game was alive once again.

As the match entered the final stages, Ben Sheaf played a perfect ball for Danny Newton to get behind the Grimsby defence and after turning inside, appeared to go over under the challenge of a Grimsby defender – nothing given.

Alex Samuel made his return from injury with 10 minutes to go as he came on for Danny Newton.

Neither side was settling for a draw but both defences were able to focus and lock in for the remainder of the contest. A first point under the new manager and one which does a lot to help relieve any remaining relegation fears amongst the supporters.


Stevenage to face Grimsby at Blundell Park on Easter Friday...

Ticket prices do not increase on matchday but advance sales will end at midday on Thursday 29th March.

Ambulant & wheelchair disabled fans must contact Grimsby Town ticket office directly on 01472 605050 to buy their tickets and can also find out more information about their facilities.

The SFCSA coach will be running with a strict departure time of 10am from the Lamex Stadium. Tickets cost £20 for members and £25 non-members.