Tickets can be purchased on the day of the game from the Crewe Alexandra ticket office, located next to the away turnstiles.

Crewe Alexandra have put together an away supporters guide for those travelling.

The SFCSA coach will be running with a strict departure time of 9:30am from the Lamex Stadium on Saturday morning.

Tickets can be purchased from the meeting point and cost £25.75 for non-members and £20.75 for members.

A number of first team debuts were made during the midweek Checkatrade Trophy game at Milton Keynes and following tomorrow's game, Darren Sarll's side face a particularly testing couple of weeks.

Meanwhile, after getting off to an unbeaten start in August, Crewe have been struggling for results recently, picking up just one win throughout September.

That win - a 5-1 trumph over Chesterfield - briefly illustrated the Railwaymen's quality in what has otherwise been a down month with five straight league defeats going into tomorrow's game.

Stevenage have two key men out on International Duty this weekend with Ben Kennedy called up for the Northern Ireland U21s and in-form Terence Vancooten called up for Guyana’s First Team squad.

There are no fresh real injury concerns ahead of Saturday's game, although a couple of players are being monitored after picking up knocks in training.

On the comeback trail, Jack King and Mark McKee are believed to be working towards a return date of October 21st when Stevenage host Forest Green Rovers.

For the opposition, Crewe will be without George Ray (back), James Jones (hip) and Ryan Wintle (fractured tibia).

“We seem to have a nice balance at the minute, a nice blend. Everyone has been in a decent place and I was happy to take a load off some of the senior players this week with the Tuesday game. That will be of benefit to us because our game is all about energy.

“There has been a lot of progress and it has been a decent start for us. We are still very disappointed about the points we dropped against Lincoln and Swindon because of the manner but we are pleased overall.

“We just want to be as competitive as possible and stay there as long as possible.”

"A lot is made of confidence and as a footballer you have to be confident in your ability. If you are low on confidence before you step onto the pitch then you are in trouble.

“I pick a team and formation to win a game. It is not a raffle and there is a lot of thinking that goes into it. We assess our strengths and their weaknesses and make sure we always give ourselves the best chance of winning."

Stevenage have had the better of Crewe over the years with 5 wins, 2 draws and just 1 defeat across all compeititve meetings.

Did you know - @StevenageFC have a 100% record at Alexandra Stadium. pic.twitter.com/tTOevVTA7R

Always stay locked into our Twitter feed on a matchday where we will have live updates throughout the day. 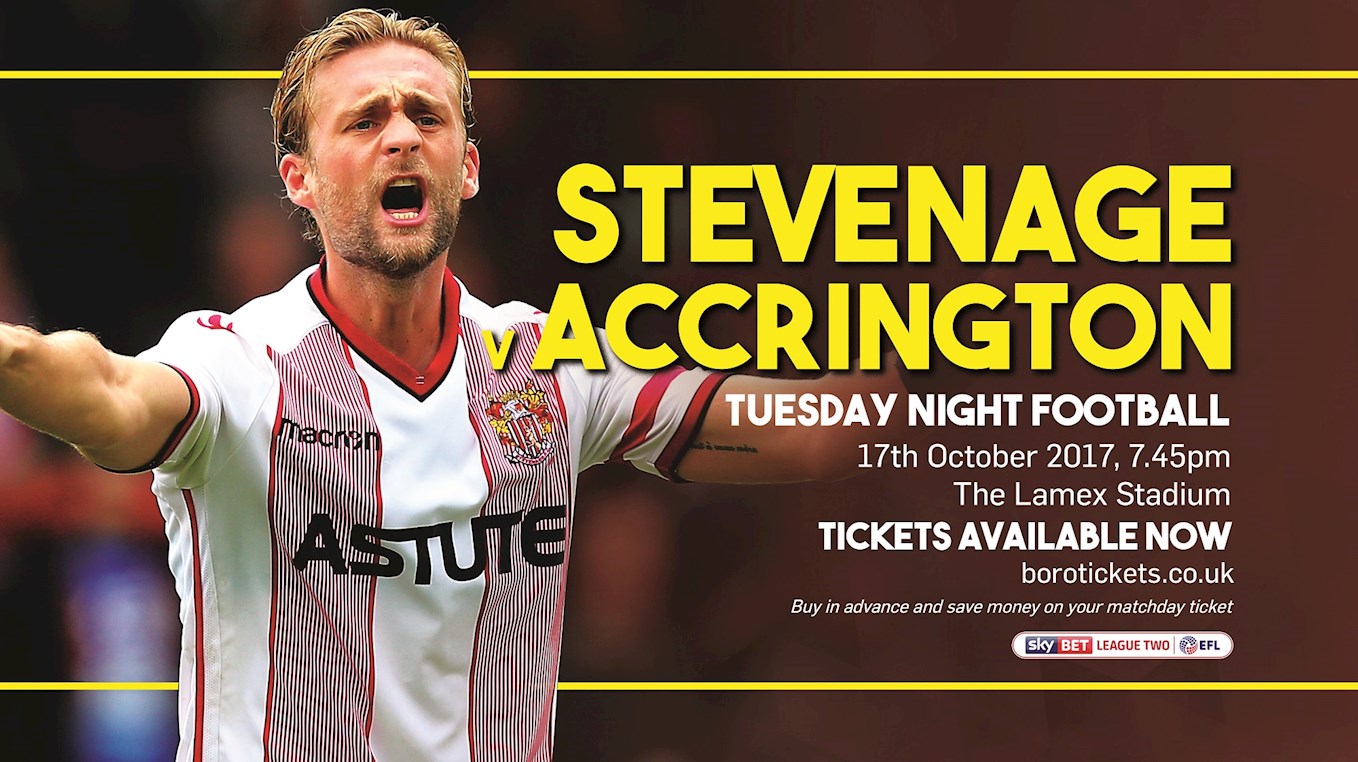 Stevenage’s run of three straight league wins came crashing to a halt at Crewe as a last minute winner for Jordan Bowery won it for the hosts.

Boro never really showed their best stuff on the day and despite a strong defensive performance for 93 minutes, it wasn’t enough as the Railwaymen snatched it with the last kick of the game.

After featuring in the midweek Checkatrade Trophy draw at Milton Keynes, there were places on the bench for first year pro, Wade-Slater along with scholars Wilmot and Georgiou.

It took a little while for Stevenage to get hold of the game as Crewe enjoyed the better of the opening exchanges. Dagnall spurned a chance just one minute into the game, seizing onto Gorman’s loose ball before firing straight into the hands of Fryer.

George Cooper was very much the danger man for Crewe early doors and missed two good opportunities inside the first 20 minutes. The first a scuffed effort which was simple enough for Fryer to deal with before another loose ball presented him with the chance from 12 yards, but a lack of composure on the strike saw it fly over and into the stands.

30 minutes into the game and Boro were beginning to get a grip on things. A couple of nearly moments soon followed before a penalty was awarded after Godden was taken down having burst into the area from a wide position.

With a 100% conversion rate from the spot last season it was no surprise to see Godden step up, yet Richards stood his ground to beat it away as he opted to rifle it down the middle.

The contest was competitive and downright chippy. Yellow cards to Conlon, Wilkinson and Franks were all given in the first half whilst Nolan of Crewe received one himself.

With ten minutes of the half left, Danny Newton was unlucky to see the linesman’s flag raised after finding the net with a powerful first time hit, but Boro went into the break all square with it all to play for in the second half.

Sarll rung the changes early, bringing on Wootton and Wade-Slater for Newton and Conlon in the 54th minute hoping to spark the team info a new lease of life.

Crewe continued to threaten down the flanks and with both Stevenage centre-backs already on cautions, high alert and full concentration was needed throughout the rest of the contest.

Neither Franks nor Wilkinson shied away, both needed for timely interventions, blocks and challenges as Crewe got in down the sides but were unable to carve out a chance.

Whelpdale almost scored the opener after an hour as he received the ball on the edge of the box following a swift break up the pitch. The winger turned inside before firing at goal, the ball taking a deflection and landing just on the roof of the net.

With 15 minutes to go, Stevenage had their best chance of the half. Kyle Wootton using his strength to beat his man out wide, before finding the on-rushing Jonathan Smith who could only blaze over from 12 yards away.

Crewe kept on going though, piling on the pressure late in the game.

Andronicos Georgiou came on for Matty Godden to make his league debut and with the last kick, Bowery won it for the home side. Despite batting away everything that came at them throughout the contest, it was one too many in the end as Stevenage travel home heartbroken.

Back the boys on the road this weekend...

It has been a brilliant start to the season for Stevenage away from home - 3 wins, 1 draw and just 1 defeat.

Having won each of our four previous trips to Gresty Road, Boro will be aiming to make it the magnificent five on Saturday.

Tickets can be bought either in-advance from the usual channels, or from the matchday ticket office, located next to the away turnstiles.

Tickets purchased on match day will NOT rise in price.

The SFCSA coach will be running with a strict departure time of 9:30am from the Lamex Stadium. Tickets cost £25.75 for non-members and £20.75 for members.