Stevenage went toe-to-toe with fellow Play-Off chasers Exeter City on Easter Monday in a game that neither side was willing to concede...

Kurtis Guthrie’s 27th minute opener was cancelled out by Ryan Bowman’s close-range strike just 12 minutes later, and despite both sides going for the victory in the second half, neither side were able to break the deadlock.

The result keeps Stevenage’s chance of making the Play-Offs in-tact, behind by two points with two games to go.

Dino Maamria named just two changes to the side that ran out 4-1 winners at Port Vale on Friday, bringing in Joel Byrom and Joe Martin for Arthur Iontton and Johnny Hunt.

After a relatively quiet start to proceedings, it was Ilias Chair and Kurtis Guthrie that sparked both the team and crowd into life. The in-form attackers linking up in the 10th minute to burst through the heart of the Exeter defence, before a slightly over-hit pass from Chair was collected by Pym. Moments later, it was Chair who forced the first save of the game, cutting in onto his right foot before unleashing his strike towards the bottom corner. On this occasion, Pym was equal to it.

With an expectant crowd now revved up, Exeter almost hit Stevenage on a counter-attack and spoiled the party. Nicky Law finding Lee Martin whose excellent cross was headed behind by Cuthbert. Farman was then forced into action as Sweeney tried to find a way through to goal from the second phase of play.

As the half reached the midway point, both sides looked capable of scoring as the match swung back and forth from one end of the pitch to another. Stevenage finally found a deserved opening in the 27th minute though through Kurtis Guthrie, the striker score his 6th goal in the last 4 games, as he climbed highest to connect with James-Wildin’s cross at the back-post.

Now a goal to the good, Stevenage continued to play on the front-foot, putting pressure on the Exeter defence but as the match approached the final five minutes of the half, it swung back in the Grecians favour. Ryan Bowman lashing in from close-range to hit a deflected shot that wrong-footed Farman, leaving him no chance. Less than a minute later, Williams cracked the underside of the cross-bar with an outrageous strike from distance and in the end, Stevenage would have been content with a 1-1 score at the break.

Exeter came out all guns blazing to start the second half and Stevenage had Paul Farman to thank just two minutes in, as Williams broke free into the box to go on-on-one with the keeper. Thankfully, Farman came out quickly and was unable to block Williams’ goal-bound shot from creeping into the far corner.

It took some time for Stevenage to get to grips with the game in the second half, not helped by an injury to Scott Cuthbert which meant for an earlier-than-expected appearance from Luke Wilkinson. Things soon started to pick up though and the usually deadly in the air Guthrie could have grabbed his second with a back-post header from Joe Martin’s cross.

Farman, who has been in irresistible form as of late, came up big once again on the hour mark as clever play from the Exeter attackers released Captain Taylor into the area, whose attempt to lift the ball over the goalkeeper was denied.

Looking for a spark, Dino Maamria replaced Joel Byrom with Mark McKee and for Luther James-Wildin for Alex Revell with just over 10 minutes remaining in the contest.

Exeter would see a Bowman goal disallowed as the striker stretched out to bundle the ball in from six yards, and despite both sides showing their desperation for the win, the spoils were shared at a sun-kissed Lamex Stadium.

Tickets are on sale for Stevenage's final away game of the season, taking place on Saturday April 27th at Mansfield Town...

Stevenage travel to the One Call Stadium looking for a win to keep their Play-Off hopes alive going into the final game of the season, but face a stern test in Mansfield, also desperate for the victory to strengthen their grip on an automatic promotion spot.

As such, Mansfield are hoping to attract their biggest crowd of the season and are offering FREE ENTRY to all U18s, including Stevenage supporters.

These free tickets are available from the Club Shop (Open 10am-7pm on Thursday's & Friday's) or from Field Mill on the day of the game. Any U18s who have already paid for a ticket may get a refund upon presentation of their ticket from the Club Shop.

Advance prices (available up until 5pm on Friday) for Saturday's fixture are as follows:

Please note that all prices (aside from U18s) rise by £2 on the day of the game and all U12s must be accompanied by a paying adult.

The Supporters Association coach is departing the Lamex Stadium at 11:30am on the day of the game so please arrive with plenty of time to spare in-order to ensure a timely departure. Tickets cost £20 for SA members and £25 for non-members. 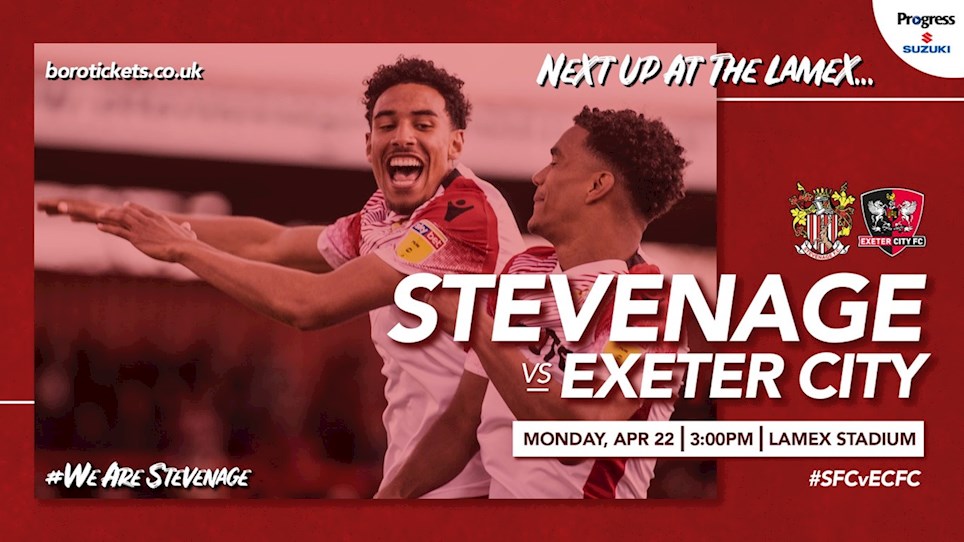 Join us for Easter Monday crunch clash vs Exeter