Tickets are available from just £10 for adults, £5 for concessions and £3 for U12s from the Ticket Office or West Stand turnstiles tonight.

Kick-off is at 7:45pm and please note that only the West (home) and South (away) Stands will be open for this evening’s game.

The Broadhall Suite will be open from 6pm until kick-off for both home and away supporters.

The Club Shop & Ticket Office are open from midday through until kick-off. Pop into the store before the game gets underway and browse our newest selection of replica kit, training wear and #WeAreStevenage t-shirts.

The Arriva Shuttle Bus will NOT be in operation this evening. It will be back running for Saturday’s home game against Cambridge United.

Don’t forget to download your FREE digital programme! We are breaking new ground this season so click here for more information and to get your copy. 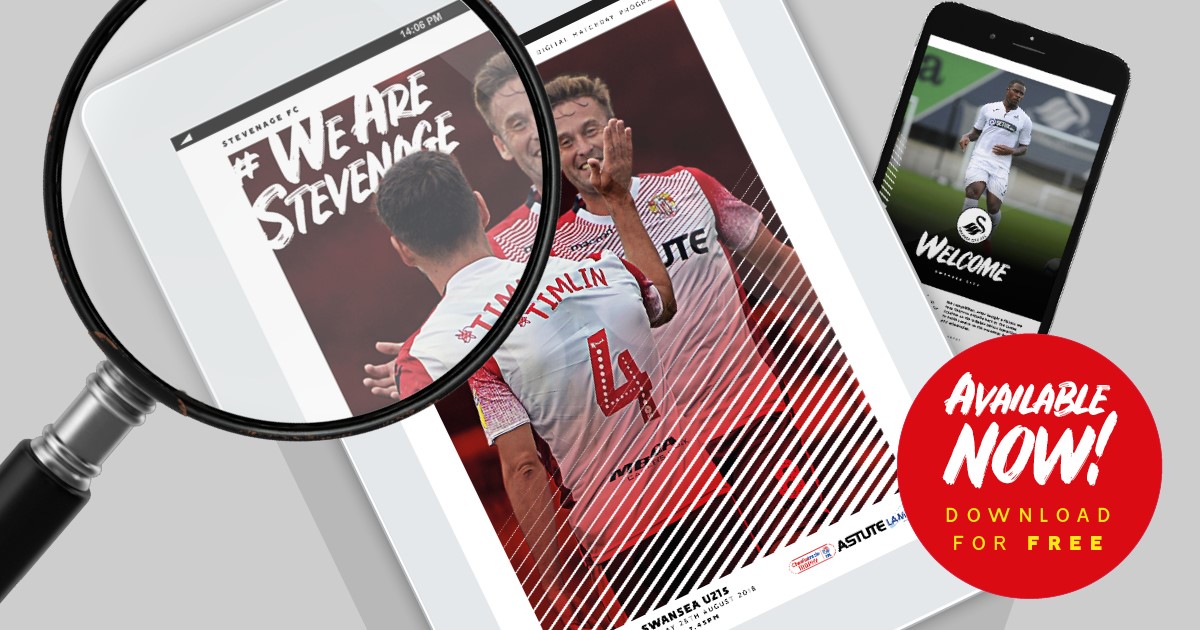 After being knocked out at the first stage for the past three seasons, Stevenage will be hoping for an improved campaign in 2018/19 as the Checkatrade Trophy gets underway once again.

After the initial draw in July saw AFC Wimbledon and Charlton Athletic grouped with Stevenage, Swansea City U21s were the final (invited) side to be drawn into Southern Group G.

The format for this year’s competition is almost identical to last season, with only a couple of small regulation changes.

Players from EFL Clubs who are out on loan in the National League and below are now eligible to feature in the competition, whilst invited teams have been restricted to fielding two players over the age of 21 and with more than 40 First Team appearances.

Swansea’s First Team are playing at home to Crystal Palace in the EFL Cup tonight, so it is expected that the side travelling from South Wales will be a true youth team.

“I am going to make changes, I have good players that haven’t been playing, they are all going to get game time and hopefully they have an opportunity to grab a shirt for next Saturday.”

Supporters can STREAM the game LIVE with a iFollow UK Match Pass for just £10. Click here to head to the Match Centre where you can order yours now.

Live match commentary will be available for standard iFollow subscribers and make sure you are following our Twitter account throughout the day as we bring you the very latest from The Lamex Stadium.

Onto Cambridge on Saturday...

Stevenage posted three points in their first Checkatrade Trophy game of the season as they proved too much for their U21 opponents, Swansea City, running out 5-0 winners at the Lamex Stadium.

After a largely frustrating first half, two goals right before the break from Ben Kennedy helped break the deadlock before Kurtis Guthrie got in on the action with his first three goals for the club in the second half.

Dino Maamria named nine changes to the side that lost out to Yeovil on Saturday with Ben Kennedy and Michael Timlin the only survivors, as Dieng, Vancooten, Wilkinson, Nugent, Iontton, Ferry, Campbell-Ryce, Georgiou and Newton were all handed a starting berth.

It was clear from the off that Stevenage would dominate the contest as they enjoyed large spells of advanced possession against their youthful opponents.

It didn’t necessarily translate into a non-stop barrage of goalscoring chances though as it took almost 15 minutes for the first one to threaten the Swansea goal. James Ferry unable to keep his effort down as he struck a first-time volley towards goal following Campbell-Ryce’s cleared cross.

Dieng didn’t have much to do throughout the night but he was on his toes just a few minutes later as an over-hit Swansea cross had to be clawed away from the top corner.

Stevenage continued to push the Swans back as they tried to carve out an opening but it wasn’t quite coming off for Maamria’s men with either their final touch, shot or pass.

There was another scare moment for Stevenage inside the first half as Botti Biabi burst through on goal, only for Vancooten to get back in-time for a timely challenge at the vital moment.

It may have took until the final few minutes but Boro eventually got what they deserved right before the break with a quick-fire double that left the Swans reeling.

The first via a Kennedy penalty after Georgiou was tumbled over inside the box before Kennedy struck again, this time with an unstoppable volley from 20 yards out.

Neither side made any changes for the second half and it was Stevenage on the front-foot once again. Campbell-Ryce saw a well-hit effort deflect over a corner but despite the height and muscle advantage, the Swans were able to thwart an aerial threat.

Newton flicked wide of goal following good work from Timlin and Campbell-Ryce down the left and the introductions of Makoma and Guthrie almost paid immediate dividends as the latter forced a save out of Benda with a headed effort just minutes after entering the pitch.

The final substitution of the night came with 20 minutes to go as Emmanuel Sonupe replaced Ben Kennedy.

Kurtis Guthrie netted his first Stevenage goal with 20 minutes to go as he took charge from the spot following the second penalty award of the evening. More clever play between Campbell-Ryce and Timlin down the left-hand side resulted in the former Southend man being tripped up, leaving the way for Guthrie to dispatch the spot-kick.

Dieng would have one more chance to show why he was loaned into the club with a fine save as Swansea’s Evans had him scrambling down to his left from a sweetly struck free-kick.

Guthrie made it four as he smashed home a volley with 10 minutes to go and his night was only going to get better as he scored a superb fifth to complete his hat-trick.

It was truly the icing on the cake as he picked the ball up from just inside his own half, taking it all the way to goal before a delightful chipped finish that gave Benda no chance in goal.

A professional win from Stevenage as they get off to the perfect start in the Checkatrade Trophy whilst perhaps giving the Manager one or two headaches ahead of Saturday’s big derby at home to Camridge United.

Dino Maamria's men will be looking to get the campaign off to a flying start before facing other group competitors AFC Wimbledon and Charlton Athletic.

Tickets are at the following bargain prices and please note, only the West Stand will be open.

Kick-off is at 7:45pm and tickets are available both in-advance or on the day of the game.

Tickets can be purchased through the club shop, over the phone on 01438 223223 or online at www.borotickets.co.uk.