Stevenage FC lost their first game of the Sky Bet League Two season on Saturday as a nightmare first half cost the side dearly in a 2-0 defeat at Yeovil Town.

All the damage was done in the first 45 minutes as the home side opened up a two goal lead with little response coming the other way.

Things improved in the second half as Stevenage went onto become the better team but a comeback wasn’t to be as key chances were spurned during the vital moments.

To make matters worse, a frustrated Michael Timlin was dismissed late in the game as he picked up his second yellow card with just a few minutes to go.

Dino Maamria named an unchanged line-up from Tuesday’s trip to Forest Green, the boss clearly pleased with the performance and result as Stevenage earned a hard-fought draw away from home.

Having yesterday signed a new contract with the club, Danny Newton was restored to the bench following a rib injury suffered at Crawley Town a few weeks prior.

With Huish Park bathed in sunshine and the Yeovil players backed by a rowdy home crowd, the Glovers got off to the better of starts and it didn’t take long before they took the lead.

After a number of half chances inside the opening 15 minutes, it was Yeovil’s main man Alex Fisher who made it count as he burst beyond the Stevenage defence before slotting past Farman in goal. It was a well-crafted opener and one that Boro couldn’t say they didn’t deserve.

The poor start brought about immediate action from the bench as Emmanuel Sonupe was brought on for James Ball after less than 30 minutes gone.

Whether it was the substitution or not, Stevenage finally began to improve after the goal and although there wasn’t much in terms of clear cut chances, Boro were able to thwart the Glovers threat whilst looking more dangerous themselves going forward.

The closest opportunity coming after Revell was played in-behind the defence out wide, the striker’s ball across the 6 yard box agonisingly out of reach from the Stevenage attackers.

It was far from enough though. A below-par first half was capped off just before the break as D’Almeida was found on the cut-back before blasting home from the edge of the box.

Alex Reid replaced Ben Kennedy at the break and Boro came out with a renewed vigour, almost halving the deficit within a minute of the restart. Hunt getting to the by-line before drilling a low cross towards Revell at the near-post, the striker just unable to flick the ball goal-wards.

Just before the half hour mark, Stevenage had two golden opportunities to find a route back into the game as Cuthbert and then Reid both came close.

Cuthbert heading over from point-bank range off a Stevenage corner before Newton’s introduction almost brought about immediate dividends as he fired a low cross towards the back-post but Reid couldn’t quite find the vital touch.

Stevenage continued their upturn in form during the second half as they kept pushing forward with intent. Newton able to shrug off his man as he charged towards goal but the ball just got stuck in the ground as he tried to find the target.

In command of the game, Yeovil rarely threatened throughout the rest of the half as they sat on their 2-0 lead.

Byrom should have found the net with 15 minutes to go as Newton’s lofted cross towards the back-post sat up beautifully for the midfielder, but his shot was skewed wide as it beginning to feel like it wasn’t going to be Boro’s day.

That was confirmed with a few minutes left as Timlin picked up his second yellow card of the game as he tried to make amends for an intercepted pass.

Newton gave plenty for Stevenage fans to look forward to though as he created another two opportunities for himself before the end of the game. An unbelivable defensive block denying the striker before a spectacular Baxter save kept out last season's Player of the Year.

In the end it wasn’t for the lack of trying but Stevenage fell to their first defeat of the season as attention turns to Tuesday’s Checkatrade game against Swansea, before next Saturday’s big derby at home to Cambridge.

Stevenage face Yeovil Town for our third away fixture of the season...

Stevenage travel to Yeovil Town for the third away Sky Bet League Two fixture of the season this Saturday 25th August 2018.

With the team four games unbeaten to start the season, we would love to see as many fans as possible make the trip to Huish Park.

Kick-off is at 3pm and tickets increase in price on the day of the game, so we advise supporters to purchase in-advance.

Tickets can be purchased online, over the phone on 01438 223323 or in our club shop from Thursday onwards. Click here for opening times.

Coach travel prices cost £20 for SA members and £25 for non-members. 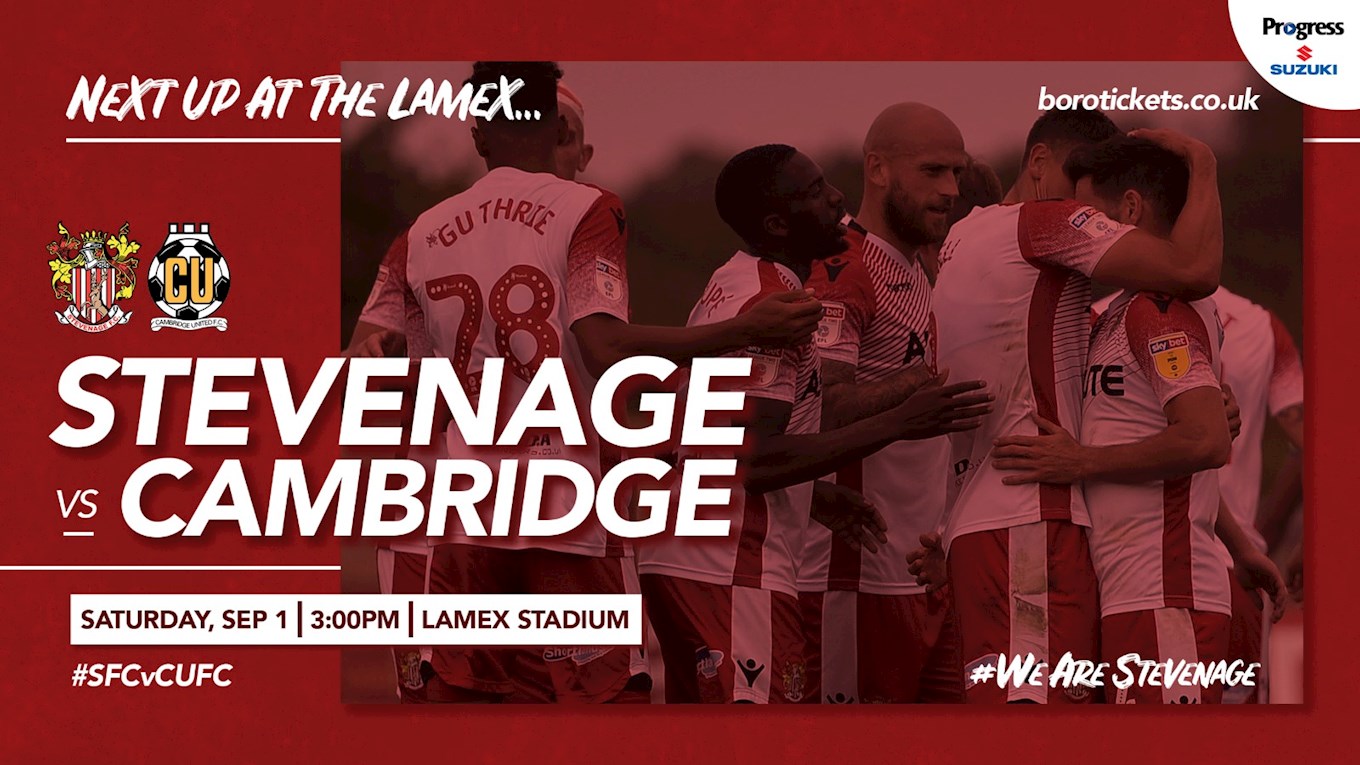