Back the Boro on Boxing Day...

Ticket sales on the day will be available at the Jobserve Community Stadium, at the following prices:

Please note, Stevenage fans have been moved to the Jobserve East Stand (1&2) & therefore will be first-come-first-served in terms of selecting seats once inside the stadium.

Need a lift to the game? The Supporters Association Coach leaves the Lamex Stadium at 12:30pm and costs £20 for non-members and £15 for SA members.

Click here for an Away Fans guide to Colchester United FC.

After one win in their last five, Dino Maamria’s men will look to give Boro fans the best Christmas present they could have asked for with a win away in Essex.

Currently sitting in 12th, Stevenage have somewhat fallen away from the play-off pack in recent weeks, however still find themselves just four points from 7th.

Boro have picked up twelve points away from home this season, with three wins and three draws, the most recent away trip being a respectable 1-1 at Northampton two weekends ago.

With three games in eight days, this congested Christmas fixture period could be pivotal in Stevenage’s play-off intentions. 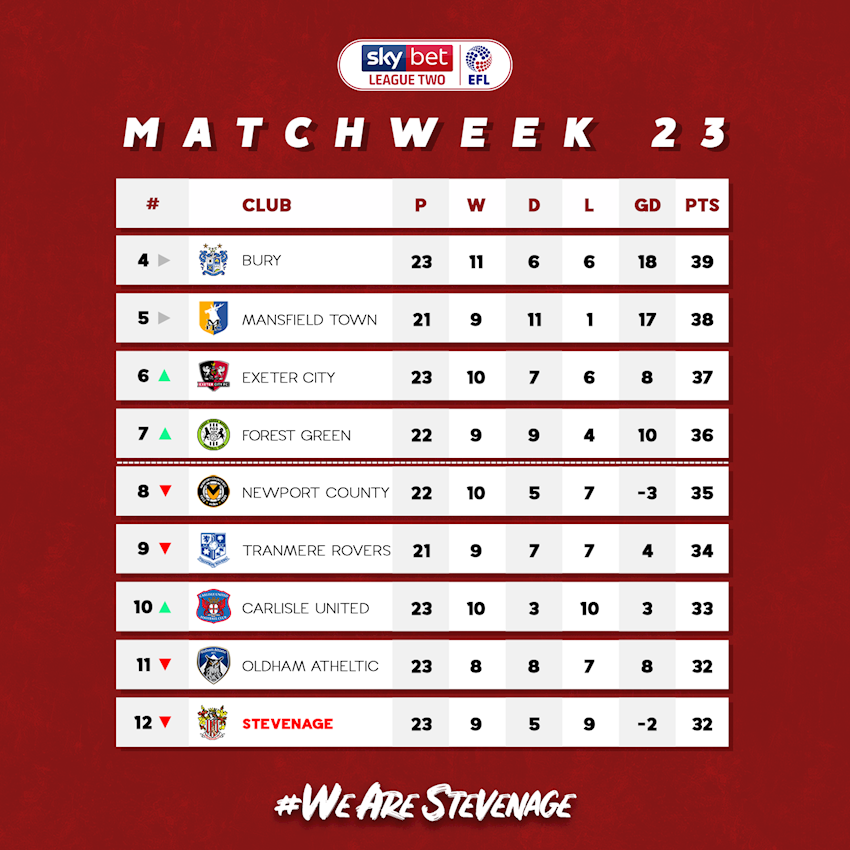 Three wins out of their last four, all being 1-0 wins, proves The U’s are tough to beat and tough to score against. This being said, Colchester did suffer a shock 4-0 defeat at Carlisle within that run. 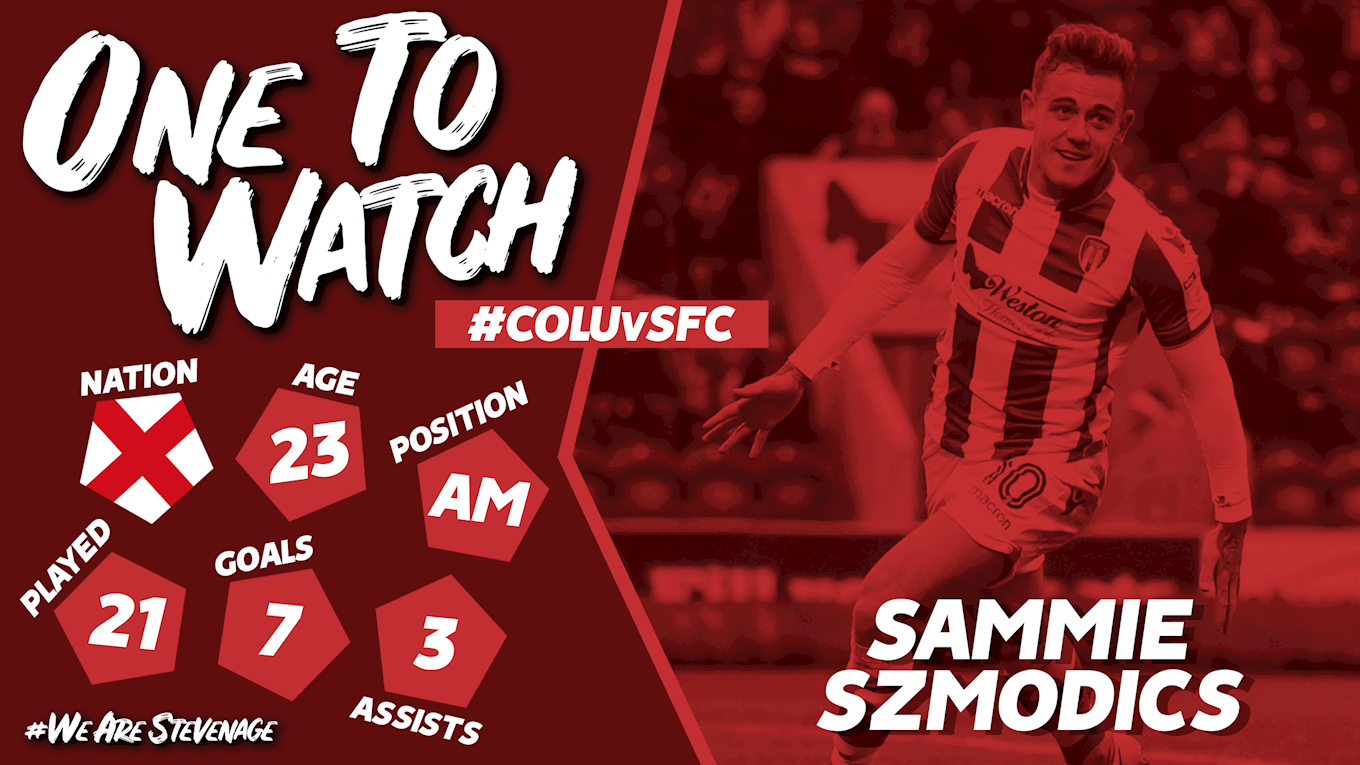 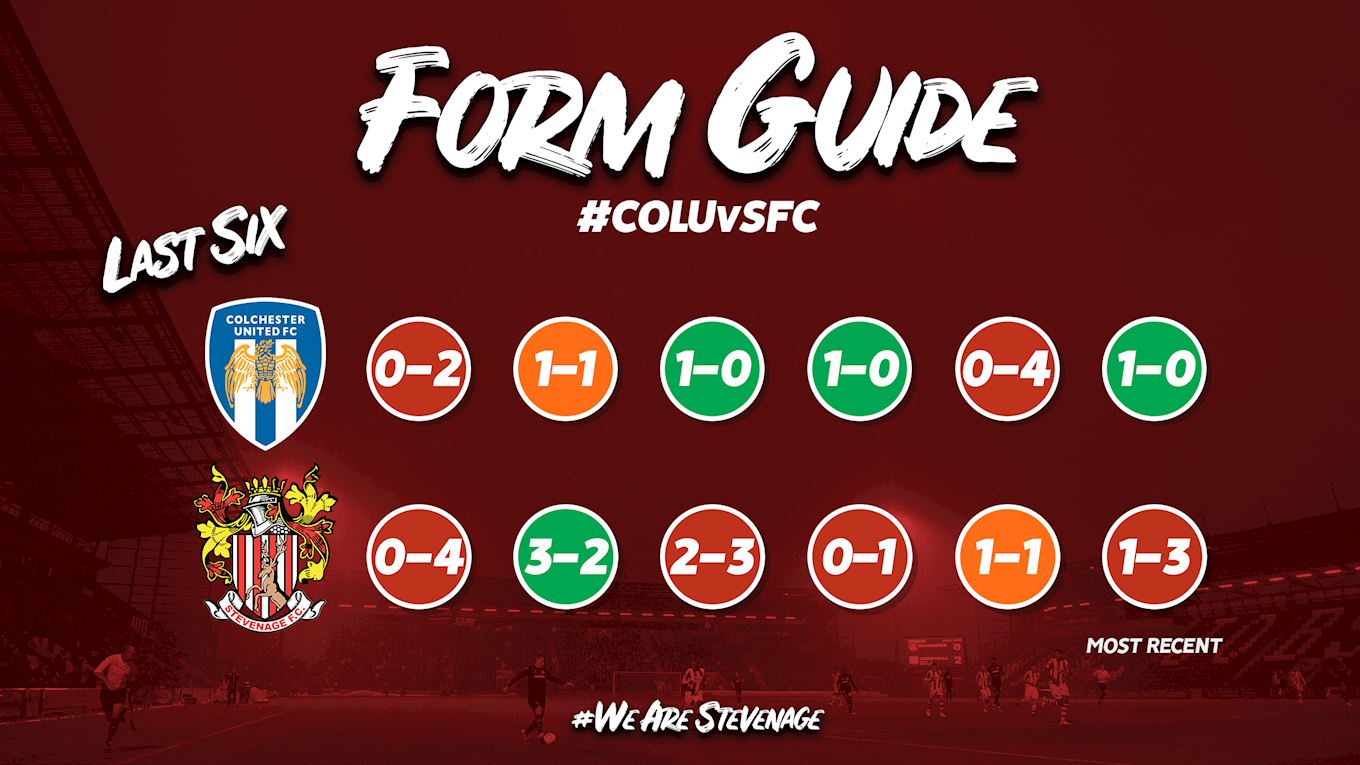 “Their tails will be up, they are a good team. It is another difficult game and we have got to be at our best.”

“I remember going there and winning 6-0 on Boxing Day, but these are different times. We need energy over the next few games because we have a lot in a small period.”

“I doubt Luther (James-Wildin) will be fit for Boxing Day, but we will have a look at him. It is a chance for Terence (Vancooten) to make his mark.” 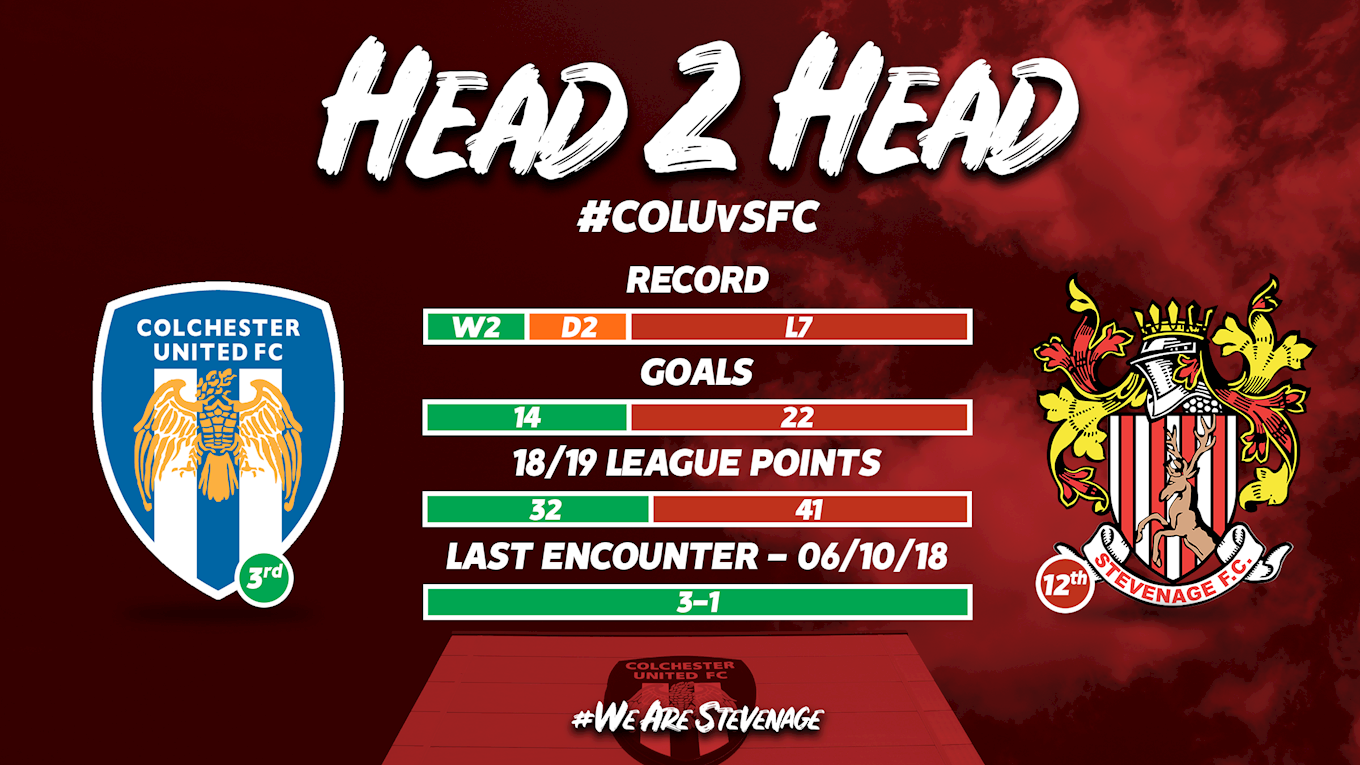 Live match commentary will be available for iFollow subscribers and make sure you are following our Twitter account throughout the day as we bring you the very latest from the Jobserve Community Stadium.

Oh what fun it is to see Boro win away...

The best present of Christmas was delivered on Boxing Day, as Stevenage picked up three points on their travels for the first time in two months, coming away from Colchester with a well deserved win.

Before the game had even started, Dino Maamria and his men already had a hurdle to cross. After the team coach breaking down just outside of Stansted Airport, the players had to get taxis through Boxing Day sales traffic all the way into Colchester. Kick-off was delayed by 15 minutes, but that did not seem to effect Stevenage in the opening moments of the game.

Within the first five minutes, Stevenage were ahead. A Joel Byrom crossed from 30 yards out was whipped onto the penalty spot, and Ben Nugent rose highest to give Boro the lead. Much to the shock of the Colchester fans, the visiting support were sent into raptures and looked good for their lead.

The home side’s first effort on target of the game came on the 15-minute mark, with Harry Pell rising highest at a Colchester corner to head towards goal. Paul Farman had kept his place in between the sticks from Saturday, and made sure to keep the ball out.

Headers look to be Colchester’s biggest threat, with Nouble, Pell and Norris towering over the Stevenage back four and looking for the equaliser. Nouble turned provider when crossing for Norris on the penalty spot, but the forward headed wide of the far post.

Just as it looked like the goal was coming for the hosts, Stevenage were two up. Danny Newton did well to break away from a Colchester attack with the ball, and pinged a 60 yard ball across to Ben Kennedy on the left wing. The Northern Irishman laid the ball to Jamal Campbell-Ryce who crossed into Kurtis Guthrie, and the forward head back across goal for Newton to tap home.

Colchester piled the pressure on leading up to half-time, but Boro stood firm and went in two goals to the good at the break.

The second half started where the first left off. The home side were seeing more of the ball and creating goalscoring chances, but none enough to cause Paul Farman any real harm. Stevenage looked threatening on the counter attack with Kurtis Guthrie’s hold up play and Danny Newton’s pace in the behind.

Frank Nouble almost halved the deficit on the hour mark, after meeting a Norris free-kick with his head, only to see his effort over the bar.

Into the last ten minutes, and Colchester were loading the box with as many bodies as possible. Captain Cuthbert and co were standing firm and rising to the challenge.

Colchester then did get a goal back, after a corner dropped to Prosser at the back post and the centre half made no mistake. Squeaky bum time had started, but the Stevenage fans in the corner were still in full voice.

Captain Cuthbert and co stood firm to limit Colchester to any more chances. Guthrie and Revell were using their body to keep the ball up the other end as much as possible, as Seddon and Hunt were tirelessly covering the numerous crosses into the box.

Much to the delight of the travelling supporters, the referee blew his final whistle for the final time and the Boro had earnt the best Christmas present possible. What a win.

Tickets for Stevenage's Boxing Day trip to Colchester United are on sale at advance prices...

Stevenage travel to the JobServe Community Stadium on Saturday 26th December 2018 for a 3pm kick-off against John McGreal's U's.

Save money on the price of your tickets by buying yours before midday on Friday 21st December 2018. After then, tickets will only be available on Boxing Day at Matchday prices.

Please see prices below. Tickets are available from the Club Shop, over the phone on 01438 223223 or online at borotickets.co.uk.

Please note, Stevenage fans have been moved to the Jobserve East Stand (1&2) & therefore will be first-come-first-served in terms of selecting seats once inside the stadium.

The Supporters Association coach is departing the Lamex Stadium at 12pm on the day of the game so please arrive with plenty of time to spare.

Tickets cost just £15 for SA members and £20 for non-members.