Get the latest ahead of Saturday's festive fixture...

After returning from Northampton with a well-earned point, Boro are eager to return home and gain maximum points ahead of the congested Christmas fixtures.

Dino Maamria and his squad find themselves in 11th place in the league table, but only two points outside of the play-off places. A win would see Stevenage level on points with Saturday’s opponents, who are still unbeaten away from home this campaign. 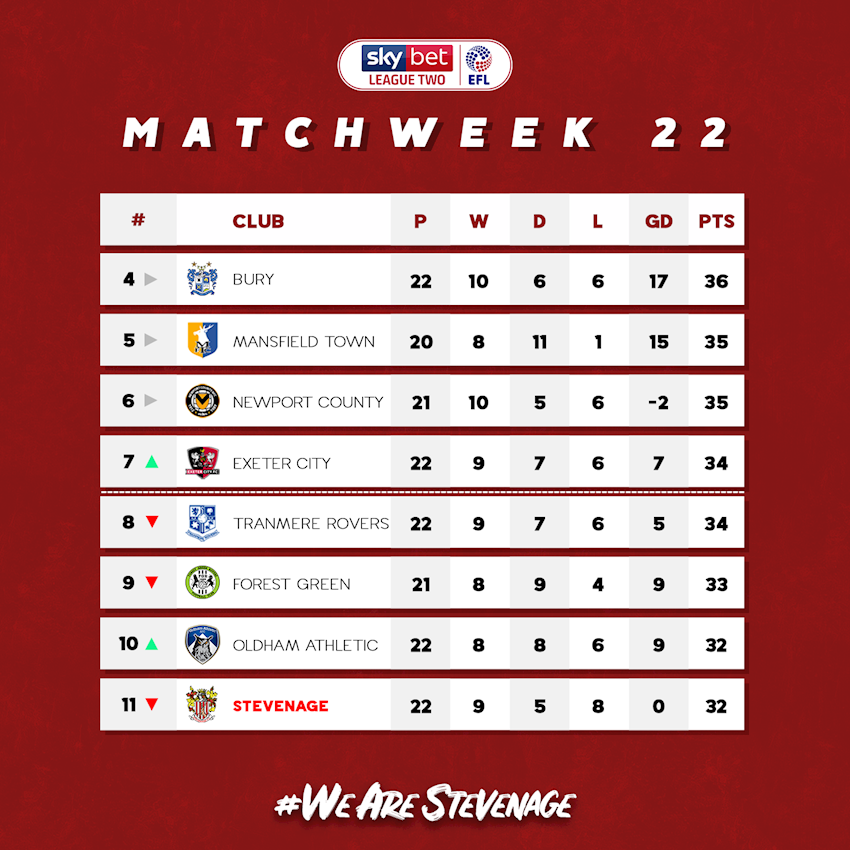 Currently on a 13 game run without defeat, the Stags are in sensational form. With just one sole loss in the league, it comes somewhat as a surprise to see Mansfield still way off the top by nine points.

The reason is 11 draws from 20 games, proving the Nottinghamshire side are the toughest of nuts to crack.

After suffering a gashed up thigh at Northampton last week, Michael Timlin is Dino Maamria's main casualty going into Saturday's clash. Seny Dieng is avalable again after missing the previous game through illness. 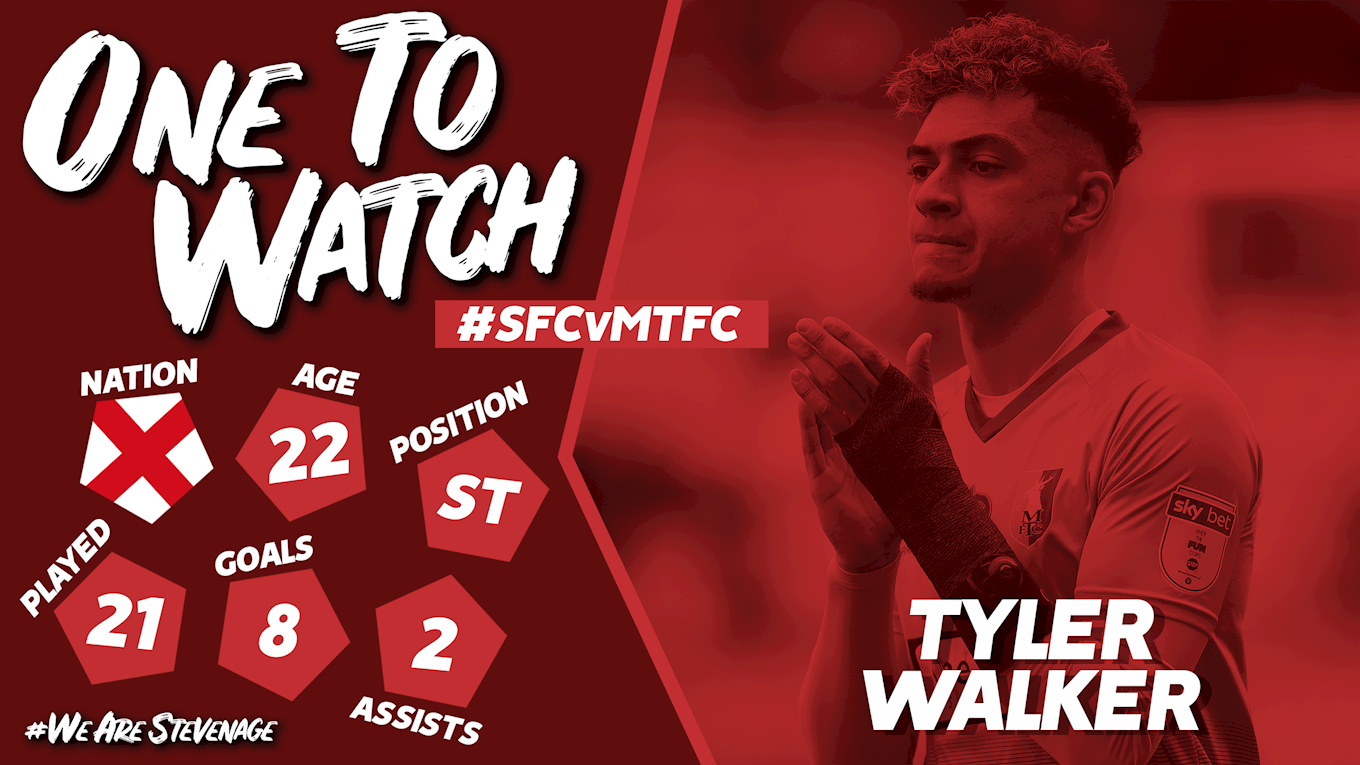 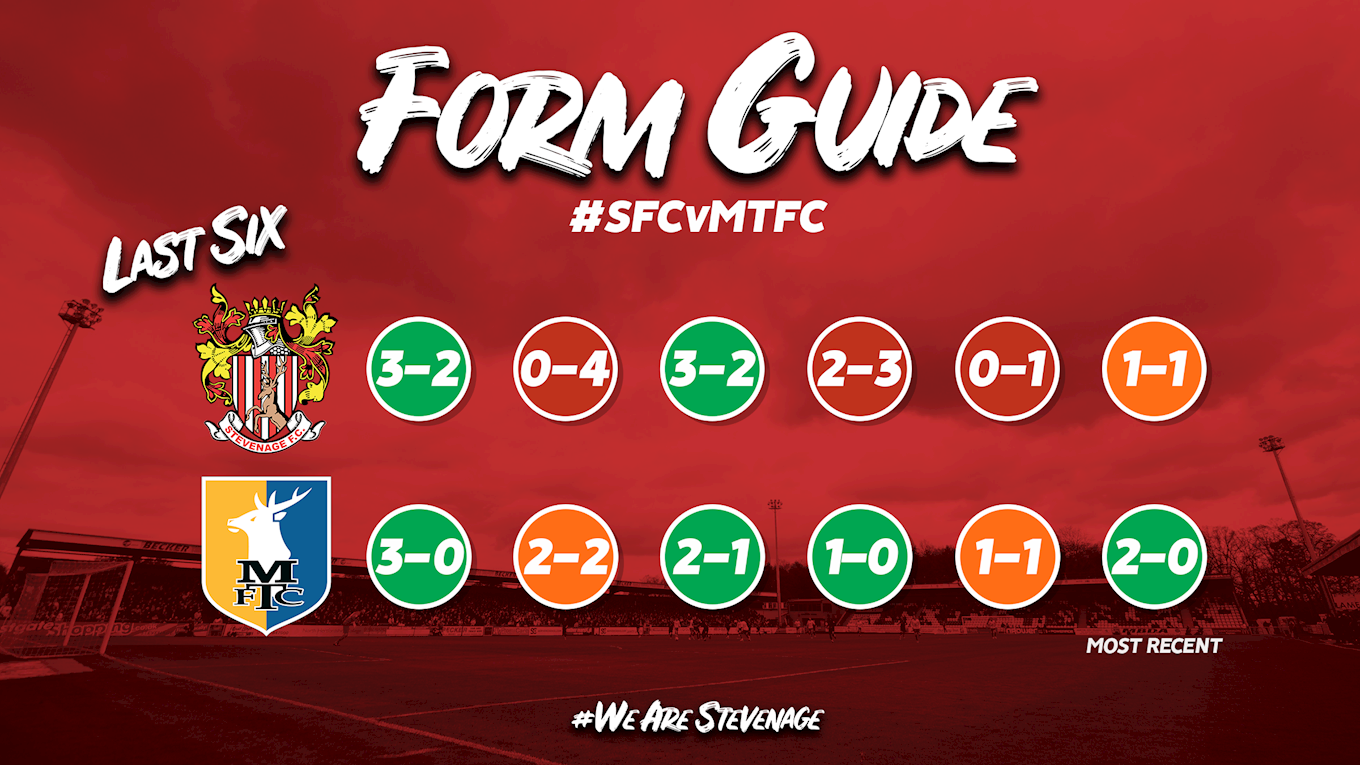 “We are looking forward to it," Dino Maamria said. "This festive period has lots of football matches, lots of points up for grabs. We have got some good games coming up, home and away.

“In this league, anybody can beat anybody on any given day, so your focus is always on yourself. We have got to approach every game with the same mindset and do our bit to win the game.

“Mansfield are a big club, big budget and big spenders. They are one of the clubs in League Two that came in to buy Matty Godden from us, so that is how powerful they are financially, they came in to buy our best player last season.

“They have got some good players, a good front line. I think (David) Flitcroft inherited a very, very good squad from Steve Evans and they should have really got promoted last season.

"They didn't and i think they look to be up there this season but I think they have got their weakness' as well that we will try to attack on Saturday.” 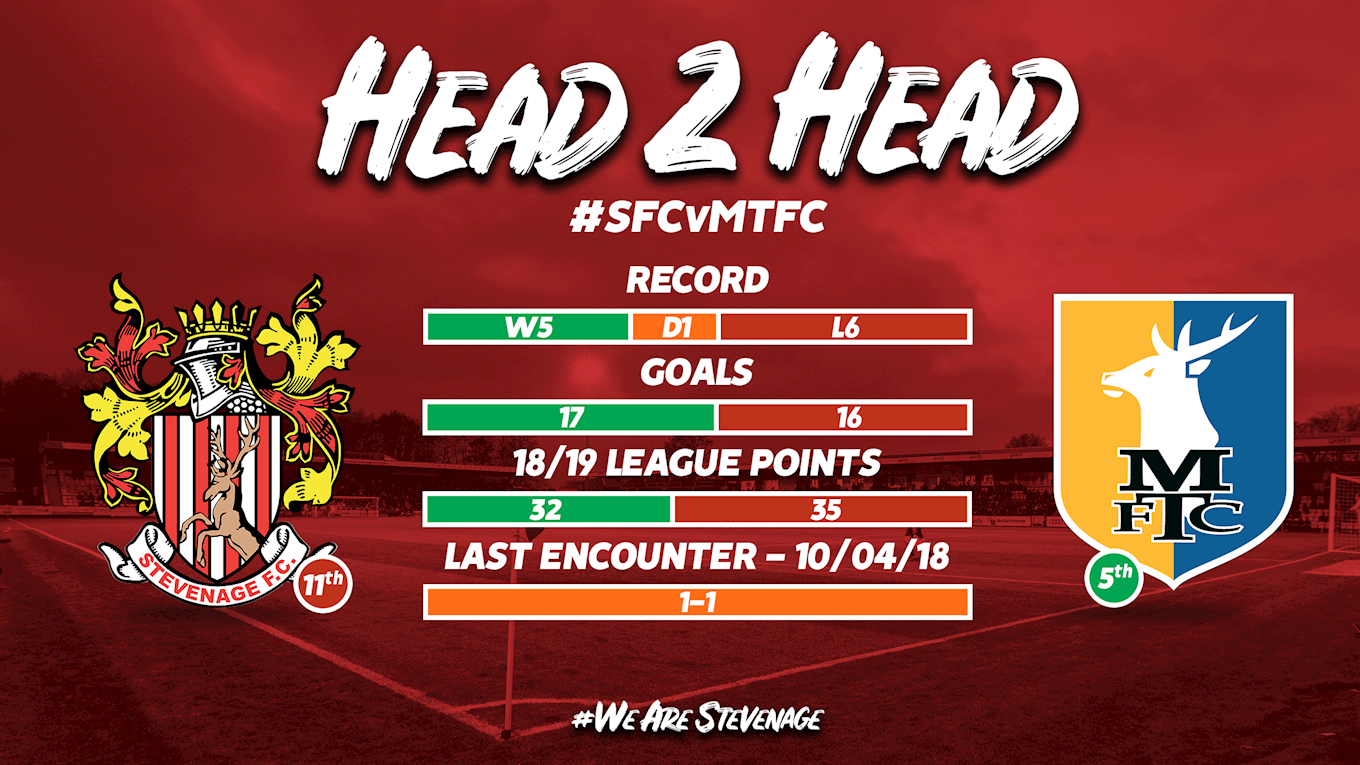 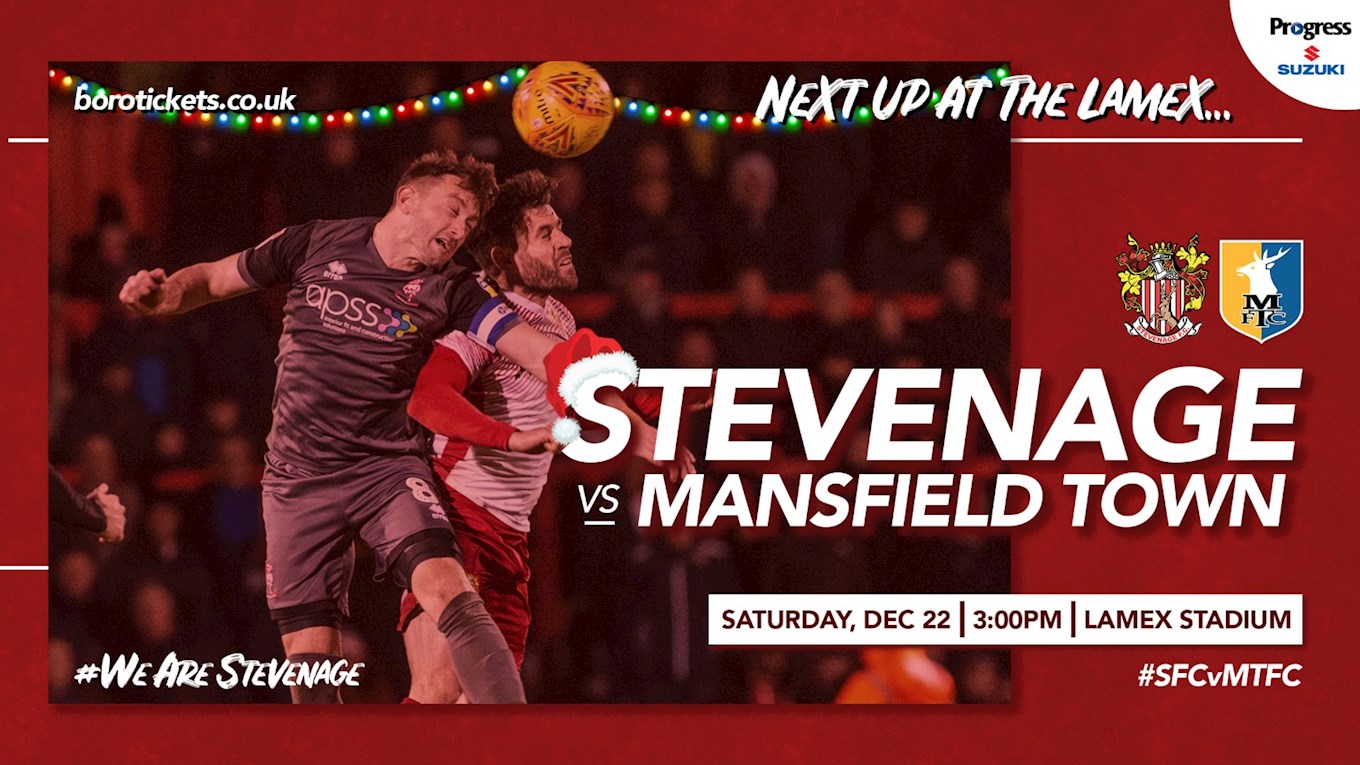 Stevenage fell to defeat at home to Mansfield in the final game before Christmas as the title-contending Stags extended their unbeaten run to 14 games....

After grabbing the lead just before half-time through Danny Newton, it was Mansfield who scored the all-important goals in a competitive second half that could have gone either way.

Dino Maamria named three changes to the side that picked up a point at Northampton seven days earlier. Newton, Ball and Academy graduate Arthur Iontton in for Revell, Timlin and Guthrie.

It was the Stags that got off to the stronger of starts and they should have been ahead after just a few minutes. Former Boro loanee Tyler Walker forcing a goal-line clearance from Scott Cuthbert as Stevenage took a little time to get acclimatised to the pace of the contest.

Before long the game began to settle down though and Stevenage were able to make some inroads themselves. Newton came inches away from stabbing the ball goal-wards from just a few yards out after dynamic play from Hunt, racing onto a through ball down the left-hand side before cutting in and curling goalwards.

As the Mansfield ball swung into the Stevenage box on 25 minutes, a miss-kick from Walker almost gifted a gilt-edged opportunity for Bishop at the back-post, but the central midfielder couldn’t sort his feel out in-time and the chance went begging.

The Stags were building up the pressure and starting his second game in a row, Farman was at his best to prevent Walker from finding the opener on 35 minutes. After racing onto a poor pass-back, Walker rode the challenge of Henry but Farman was out quick to spread himself, denying the striker any space to shoot past.

There was no question who the Mansfield danger-man was throughout the first half and right before the whistle, a quick turn and shot inside the box – which was heading for the net - from Walker deflected off Seddon and out for a corner.

Walker and the Stags were to rue those missed chances as Newton struck right on the stroke of half-time, latching onto a cross inside the box to make it 1-0 to Stevenage.

Coming out from the break, Mansfield were clearly eager to get back onto level terms and that is exactly what they did within 10 minutes of the restart. Sweeney, quickest to react to a loose ball following an in-swinging corner, smashing the ball home from just a few yards out.

Revell, who came on at half-time for Ball, could have immediately restored Stevenage’s lead but his connection with a left-footed shot following a clever pull-back from Hunt was lacking.

Rather than hide, Stevenage would up the ante for the remainder of the half, pushing the Stags back and looking to attack. Newton crashed an effort off the crossbar with 15 minutes remaining, fooling the Mansfield defence with a clever run off a corner but the strike was just a few inches too high.

Having threatened to do so all game, Walker finally found the net just a couple of minutes later though, lashing the ball home from 6 yards out as Stevenage failed to clear their lines. It was a cruel time to concede for Maamria’s men as they were enjoying their best spell of the match.

It was soon game over as Walker grabbed his second, another simple finish after Farman parried his initial effort back into the strikers path.

A second straight home defeat for Stevenage against title-chasing opposition, once again Boro just falling the wrong side of fine margins.

Stevenage return home for a Christmas Cracker on Saturday 22nd December 2018 for a festive fixture with a bang as the high-flying Stags come to town...

The Lamex Stadium has proved to hold one of the best home advantages in the division, thanks in-part to both our loyal supporters off the pitch and terrific team on it.

With the game falling just days before Christmas, we have a whole host of festive themed activities and offerings off-the-pitch...