Stevenage were on the receiving end of a last-minute stinger on Saturday as Andy Williams' added-time breakaway goal stunned the Lamex Stadium...

Having fought back from behind to make it 1-1 with an 80th minute Revell header, Stevenage let it slip in the dying minutes as Williams raced through on goal to take all three points in the 92nd minute.

The Manager named just one change from the side that fought back from behind to draw at leaders Lincoln City the previous weekend, bringing in Jordan Gibson for Skipper Ronnie Henry.

Under a clear blue Stevenage sky, both sides got off to a bright start, albeit with the visitors edging it.

Sam Hoskins was the early danger-man for Cobblers and inside the first 15 minutes he had two good chances, one headed over the bar before curling an effort from just inside the box wide of the far post.

Ilias Chair created an early sighter for himself as he looked to recreate last Saturday’s magic, firing a shot from distance a touch wide to get the supporters purring.

Alex Revell headed his own effort wide soon after good play to work the space for Gibson to cross from the right hand side.

It was Northampton who were beginning to move into the ascendency though and after O’Toole headed over from a recycled corner, the warning signs were evident.

Northampton took the lead through Powell on 18 minutes after loose play at the back allowed Cobblers to pounce and break forward in numbers. A simple pass out to the right where Powell was on-running was stuck away, capping off a below-par 10 minutes for Maamria’s men.

Stevenage soon got back to their normal ways and after Hoskins curled wide a shot from 25 yards, Chair curled his own shot wide with a 30 yard free-kick that flew just past the post.

Unsurprisingly it was Chair that was making things happen for Boro, twice twisting and turning from the left hand side before crossing for Hunt, then Revell whose efforts failed to trouble Cornell in goal.

The final chance of the half came to Boro and was created by Makasi, who embarked on a storming run from his own half all the way into the opposition’s box, before chipping the ball in for the on-rushing Chair who was beaten to the ball by an alert Cobblers defender.

Stevenage got well and truly back on top of the game in the second half as the hunt for an equaliser ramped up. Kurtis Guthrie replaced Jordan Gibson on the hour mark as Boro forced the Cobblers back to defend their box for much of the remainder of the contest.

Despite the pressure, there was a lack of clear-cut chances as a well-saved free-kick from Chair and a blocked shot from Byrom that went out for a corner was as close as Stevenage came inside the first 20 minutes of the second half.

With so much emphasis on scoring, there was always going to be holes left at the back for the Cobblers to exploit but apart from the odd foray forward and long-distance shot, Stevenage were able to keep things under control.

Cornell almost chucked the ball into his own net on 74 minutes as a James-Wildin cross had the keeper scrambling back across his goal and despite miss-handling the ball, it fell fortuitously for the opposition with Revell waiting to pounce.

He would get his chance though. With just over 10 minutes to go in the contest, Revell nodded in at the back-post to make it 1-1. Another crucial goal from the Captain with his side in-need.

Northampton came one brilliant Paul Farman save away from immediately snatching back the lead through Foley’s header but Stevenage’s #1 was able to get down just in-time to claw the ball away off-the-line.

With six minutes of added time there was always the chance for some late drama and so it proved. After Timlin was chased down by Williams from just inside his own half, the striker managed to burst away from his and Wilkinson's challenges before lofting the ball over Farman in-front of the elated travelling support.

Tickets are on sale for Stevenage's trip to Oldham Athletic on Saturday 2nd March 2019...

After falling away from the pack in recent weeks, both Stevenage and Oldham are now looking for a route back into the Play-Off picture when the two sides meet next weekend.

Get behind Maamria's men as Boro visit Boundary Park for the first time in five years. See prices below and please note that advance tickets go OFF SALE at 5pm on Friday.

To order your tickets, either visit us inside the Club Shop (Open 10am-7pm on Thursdays & Fridays) or buy from borotickets.co.uk.

The Supporters Association coach is departing the Lamex Stadium at 9:30am on the day of the game and tickets cost just £25 for SA members and £30 for non-members. 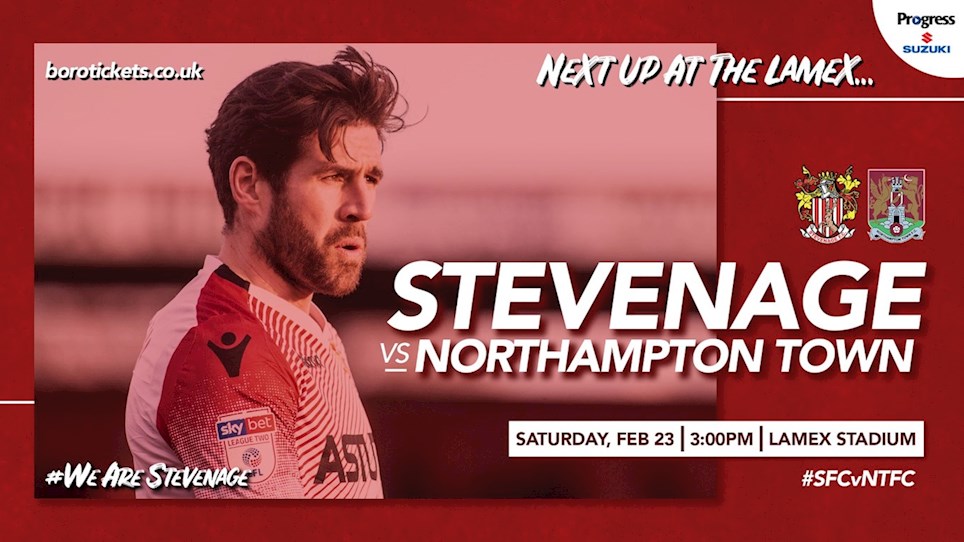 
Stevenage return home a week on Saturday for what will be the first time in three weeks...