For a more comprehensive off-the-pitch guide to Tuesday's Matchday, please click here to read out What's On guide.

Tickets at available online at borotickets.co.uk until 5pm on Tuesday 12th March 2019 or from the Ticket Office/Turnstiles at the following prices:

Please note that the Club Shop/Ticket Office is open from 12pm until kick-off whilst the Turnstiles are open from 6:45pm.

With just one point between the two sides, tonight's fixture could be a defining one as time is beginning to run out if either club are to make a late charge into the Play-Off places. 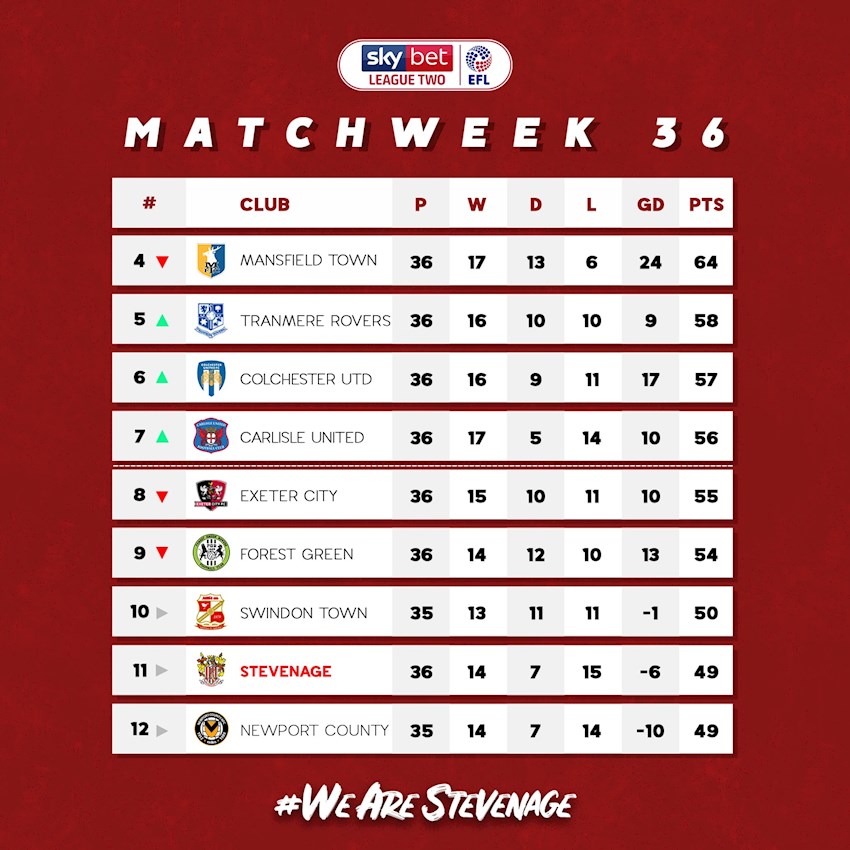 Stevenage are currently on their worst run of form this season, with no win in five games and will be looking to put an end to that with a second home game in just four days.

Injury time joy and heartbreak have come in equal measure across the past four games, as each one has seen a goal scored of consequence after the 90th minute - two resuced points away from home, two late defeats at the Lamex Stadium.

On the other hand, Swindon head into the game off the back of defeat but strong form overall. To find out more about the Robins, read our Scouting Report.

Ben Nugent has now served his four game suspension and is now available for selection once again. Danny Newton and Jamal Campbell-Ryce are the two Stevenage players confirmed as absentees due to injury.

Swindon Town top goalscorer Michael Doughty made 35 appearances for Stevenage whilst on-loan from QPR in 2013/2014. After two successful loan spells with the Robins in 2016/17, the midfielder signed a permanent deal with the club in the summer of 2018 following his release from Peterborough United.

29 year old James Dunne played in the same Stevenage team as Doughty and is now also with the Robins. Following his release from Boro in 2014, Dunne has gone onto play for St Johnstone, Portsmouth, Dagenham & Redbridge and Cambridge United before signing for Swindon in 2017.

Stevenage also have a couple of former Robins in the squad - Scott Cuthbert and Alex Revell. Revell made 10 appearances for the club during the 2009/2010 season whilst on loan from Southend. The striker scored twice during his time at the club but due to the form of club legends Billy Paynter and Charlie Austin, returned to Essex following the completion of his short-term loan.

Scott Cuthbert also played at the County Ground during this time, making 80 appearances between 2009 and 2011.

Stevenage do not have a good record against Swindon over the years. The biggest success came in December 2017, when Boro put in a five star performance to win 5-2 in the Emirates FA Cup Second Round.

With just a point and a place separating the two sides before the start of play and with the Play-Offs still just about in-sight, Dino Maamria and his men recorded a crucial victory thanks to Alex Revell’s first half header and Ilias Chair’s late cherry on the cake.

The Manager named two changes to the side that lost to Bury just four days prior, recalling Michael Timlin and the freshly available Ben Nugent to the starting XI.

During his pre-match press conference, the Manager called for a fast start and that is exactly what he got as it was Stevenage who made all the early running.

Immediate pressure was forced upon the Robins goal as Michael Timlin and Alex Revell had early opportunities as Boro bombarded the opposition box.

A breakthrough wasn’t forthcoming though and Swindon soon settled down. Keshi Anderson forced a superb save from Farman after 25 minutes and seconds later, Matty Taylor drove a dangerous low fizzer across the six-yard box that needed just a telling touch.

Midway through the second half and the play was in the balance. Michael Timlin saw his second long range shot of the game fly just past the post and Alex Revell failed to find the target with his header following fine work from James-Wildin who blasted past his marker before chipping it up for the back-post.

Second time lucky though, Revell made it count. Racing onto a brilliant corner from Joel Byrom, Stevenage’s number 9 stooped low to steer the ball home and make it 1-0. The goal lifted Boro’s spirits and had two superb opportunities in the proceeding minutes. Ilias Chair forcing a save from Vigouroux after racing onto a clever pass from Guthrie and before the half was out, Revell almost grabbed his second with another header – this time skimming along the crossbar.

Stevenage started the second half the stronger of the two sides and Chair could have made for a more comfortable evening as he arrived late into the box to connect with Guthrie’s pass – his flick towards goal not quite coming off.

Paul Farman came up huge in the second half as he thwarted Swindon with a number of brilliant stops. The keeper twice denying Anderson around the hour mark as he first saved a stunning free-kick before getting down low to palm away a rasping shot that was heading for the bottom corner. Guthrie forced Vigoroux into two top saves of his own as he first beat away a stooping header before seeing the striker’s shot wide as he galloped into the box.

With just five minutes remaining, Ronnie Henry entered the fray for his 500th appearance and with the skipper’s help, Stevenage had to see out the contest with it resting on a knife edge.

Thankfully, with the goalkeeper advanced as Swindon desperately hunted for an equaliser, Ilias Chair was able to provide the moment of the game as he scored a wonder-goal from inside his own half to confirm the victory.

In the final Tuesday Night Football game of the season, Stevenage face Swindon Town in what could be described as a must-win clash for Dino Maamria and his men.

Following Saturday's cruel defeat to title-chasing Bury, Boro have plenty of points to make-up in the search for a Play-Off spot and have to start putting together a run of good results, starting on Tuesday night.

Play your part and get behind the boys with East Terrace tickets available from just £15 for Adults and £5 for Kids.

Order your tickets from borotickets.co.uk, call 01438 223223 or visit us in the club shop, open on Tuesday from midday until kick-off. 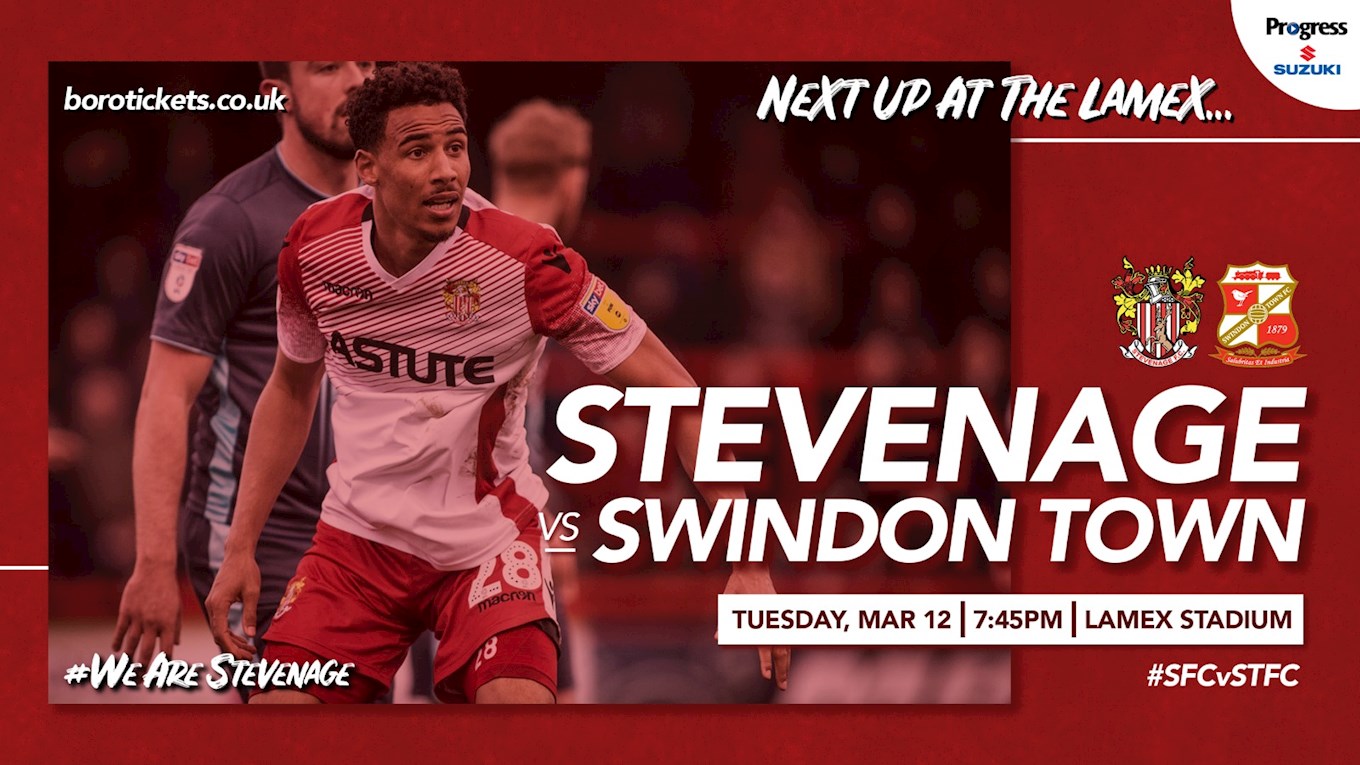