Qualification is in our hands…

Tomorrow night's fixture is a 7.45pm kick-off, and tickets are available ONLY from Kingsmeadow Stadium before the game at the following prices:

If you can't make it to Kingsmeadow Stadium, get behind the boys with an iFollow Match Pass, available for just £10, allowing you to STREAM the action LIVE on your mobile, tablet or desktop device.

With only two points separating top from bottom in Group G South, any two of Stevenage, Charlton Athletic, AFC Wimbledon and Swansea Under 23s can still make it through to the knock-out stages. Boro know a win for them will see them qualify, while a draw will be enough should Charlton beat Swansea next week.

Following an 8-0 drubbing at home to Charlton in the previous fixture, Stevenage will look to make amends with victory over the Dons. A 5-0 win over Swansea U23s in August means Boro sit second in the group, with a -3 goal difference. 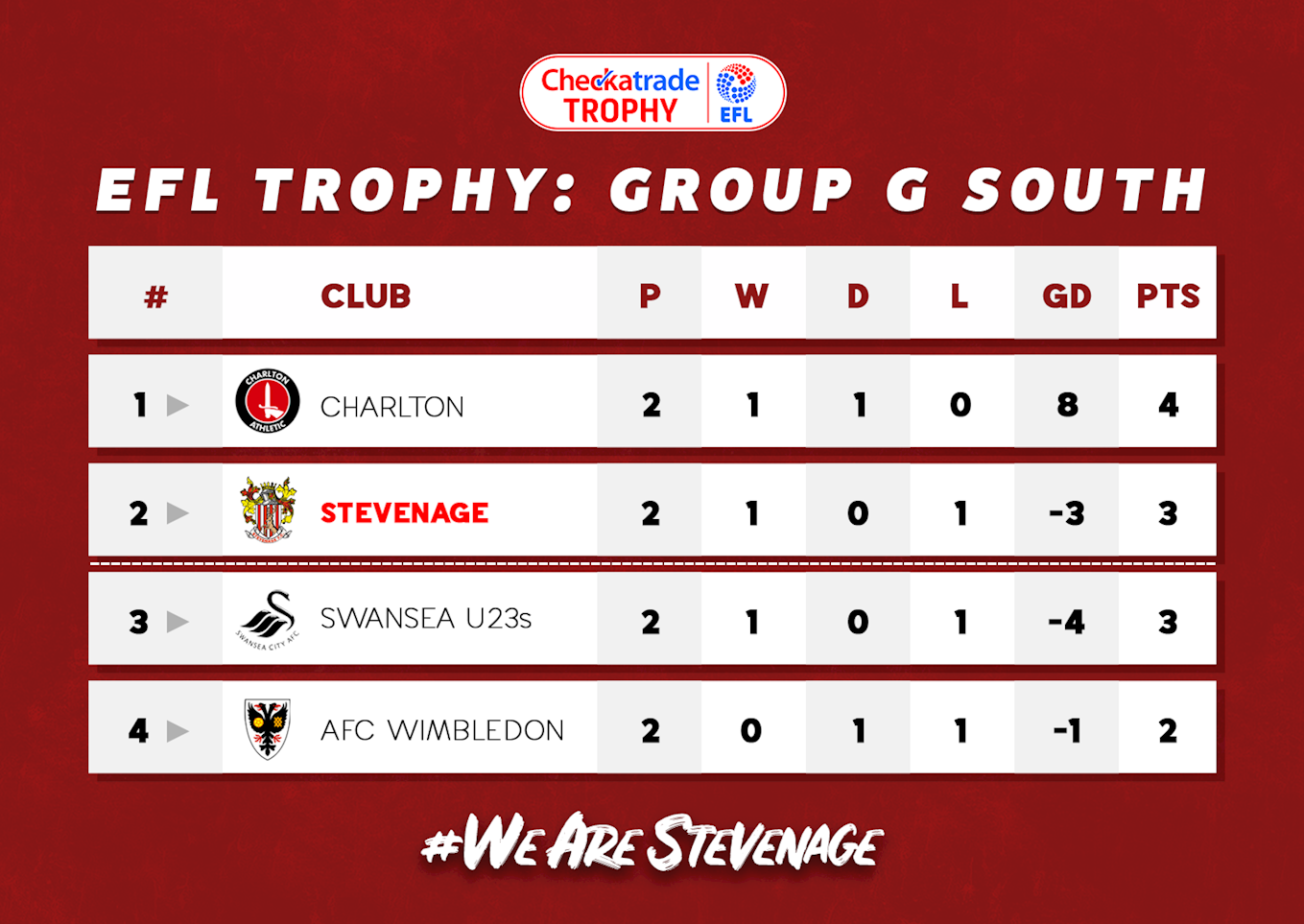 From non-league to the FA Cup, Stevenage have faced AFC Wimbledon nine times in the Kingston club’s short history.

Boro boast an impressive record vs the Dons, picking up six wins and two draws. The only defeat Stevenage have suffered to Wimbledon was in October 2011, going down 4-3 on penalties in the Johnstone Paint Trophy Round 2, after a 2-2 draw on the night.

Stevenage will be hoping of a repeat of our last visit to Kingsmeadow, with goals from Jamille Matt and Jerome Okimo securing a 2-1 win in the league.

Stevenage bowed out of the Checkatrade Trophy on Tuesday evening as League One side AFC Wimbledon saw off the challenge of Maamria’s men.

After getting off to a nightmare start which saw the Dons take the lead inside one minute, freak goals from Wordsworth on 27 minutes & Garratt inside the second half gave Stevenage a mountain to climb before Egan sealed the deal at the Cherry Red Records Stadium.

Dino Maamria named eight changes to the side that beat Oldham at the weekend, the main headlines being the return of Paul Farman and Ronnie Henry, both back in the team after recovering from recent injuries.

It took 20 seconds for the Dons to take the lead. Kwesi Appiah latching onto a cleverly timed ball over the top of the defence before chipping the helpless Farman to make it the worst possible start back for the goalkeeper.

Unlike in the previous round, Stevenage were able to recover during the early stages and should have equalised on 7 minutes when Seddon struck narrowly wide after bursting into the box to connect with Hunt’s cut-back.

The next big chance once again fell to Seddon after another lung bursting run into the box, this time getting onto the end of Vancooten’s cut-back as Stevenage began to find plenty of joy down either flank.

Wimbledon were being kept on a leash for the most part which made the second goal all the more galling. Wordsworth smashing in a rebound of his own free-kick, after his initial strike hit the wall. A heavy deflection meant for an almost impossible job for Farman to keep the ball out, leaving Stevenage 2-0 down after the first half.

With nothing really sticking up front, Maamria brought Revell on early in the second half for the ever-hard-working Steve Seddon as Boro faced elimination from the competition.

Stevenage were giving it their all but once in the final third, each move was either breaking down or being denied by a stubbon Dons defence. Meanwhile the home side’s direct approach was continuing to cause Stevenage problems with two early second half goalline scrambles somehow kept out by hook or by crook.

Newton and Timlin made way on the hour mark for Iontton and Guthrie but when it’s not your night, it’s not your night. Ten minutes later, another strange goal from the Dons made it 3-0 as a Stevenage clearance inside the box cannoned off Garratt’s head and into the goal.

Boro kept on grafting but nothing was coming off. Despite putting the Dons under plenty of pressure, it was Wimbledon's Alfie Egan who scored the fourth and final goal. A fine run and strike from the edge of the box, using his fellow teammates as effective decoys as he drove forward before curling it into the side netting.

Guthrie had the goal at his mercy moments later after a smart knock-down from Revell in the box, the striker's effort right down the throat of former Boro loanee, Tom King.

That was all she wrote in terms of Stevenage’s participation in the Checkatrade Trophy but attention quickly switches to Saturday’s FA Cup clash at Plymouth Argyle where Boro will be looking to make it into the Second Round.

With just one game to go in the Checkatrade Trophy Group Stages, all four sides in Stevenage's Group G can still make it through to the knockout rounds.

Stevenage travel to AFC Wimbledon tomorrow night for a 7:45pm kick-off, hoping to safely secure progression into Round Two.

Currently joint-second with three points after two games, any two of Stevenage, AFC Wimbledon, Charlton and Swansea U21s can all still advance from the group.

Tickets are available for just £10 Adults & Concessions, £5 for Under 18s and are only available on the day of the game from Kingsmeadow Stadium.