Get the lowdown ahead of Saturday’s game…

For all the vital information on ticketing, parking, opening times, matchday events and everything else in-between, take a read of our What’s On guide.

Since the high of victory against Oldham last time at home, Dino Maamria’s men have since suffered three defeats on the bounce, albeit in three different competitions and all on the road.

Stevenage will hope to put the 4-0 loss away at Bury last Saturday behind them as soon as possible, with a home win against local rivals the perfect opportunity to do so.

Stevenage find themselves sat in 9th place, just two points outside the play-off places. A win could see Boro thrust right back into the mix ahead of a gruelling Christmas schedule.

Milton Keynes have been flying this season and finally jumped ahead of Lincoln City to reach top last weekend. Since relegation back to League Two, The Dons boast an impressive record of ten wins and only one defeat in the league, which came away at promotion rivals Lincoln City two months ago. 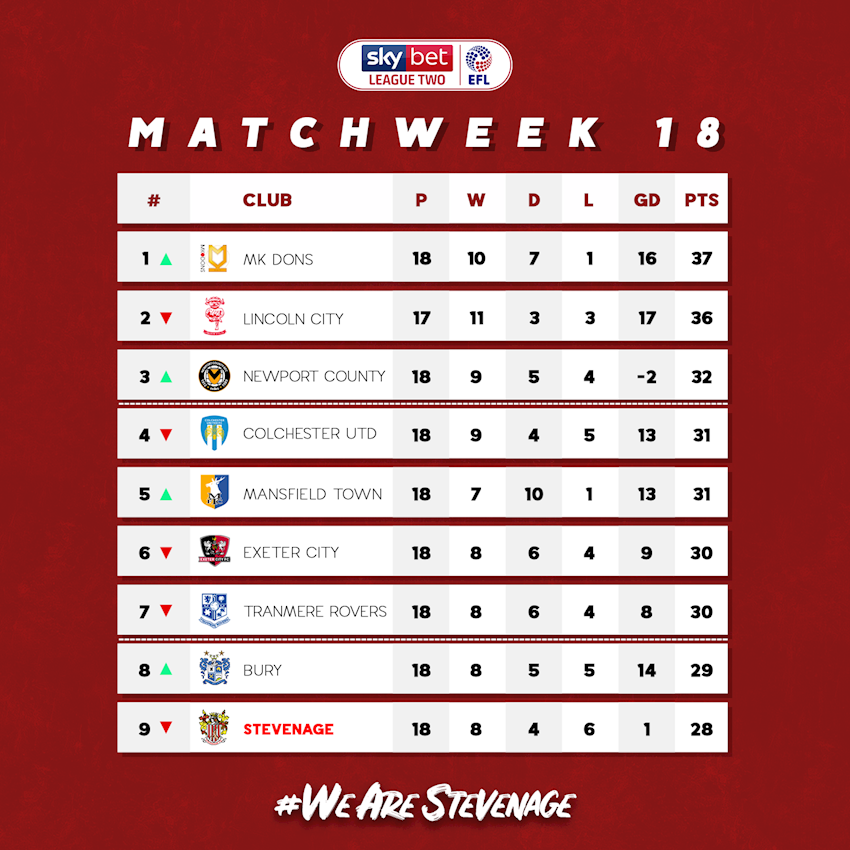 Currently on a 10 game unbeaten run, MK have the second best away record in the league with four wins, four draws and just one defeat.

Despite their good league form, Paul Tisdale’s side have had less success in the Cup competitions, fallen at the first hurdle of the FA Cup and EFL Trophy.

Dino Maamria has a number of injury concerns following a busy couple of weeks in the treatment room.

Danny Newton, Luther James-Wildin and Ben Kennedy are all doubts for the clash whilst there is more positive news for Steve Seddon and Ben Nugent who are both back fit.

Kurtis Guthrie will be serving the first of a three game ban following his dismissal at Bury last Saturday. 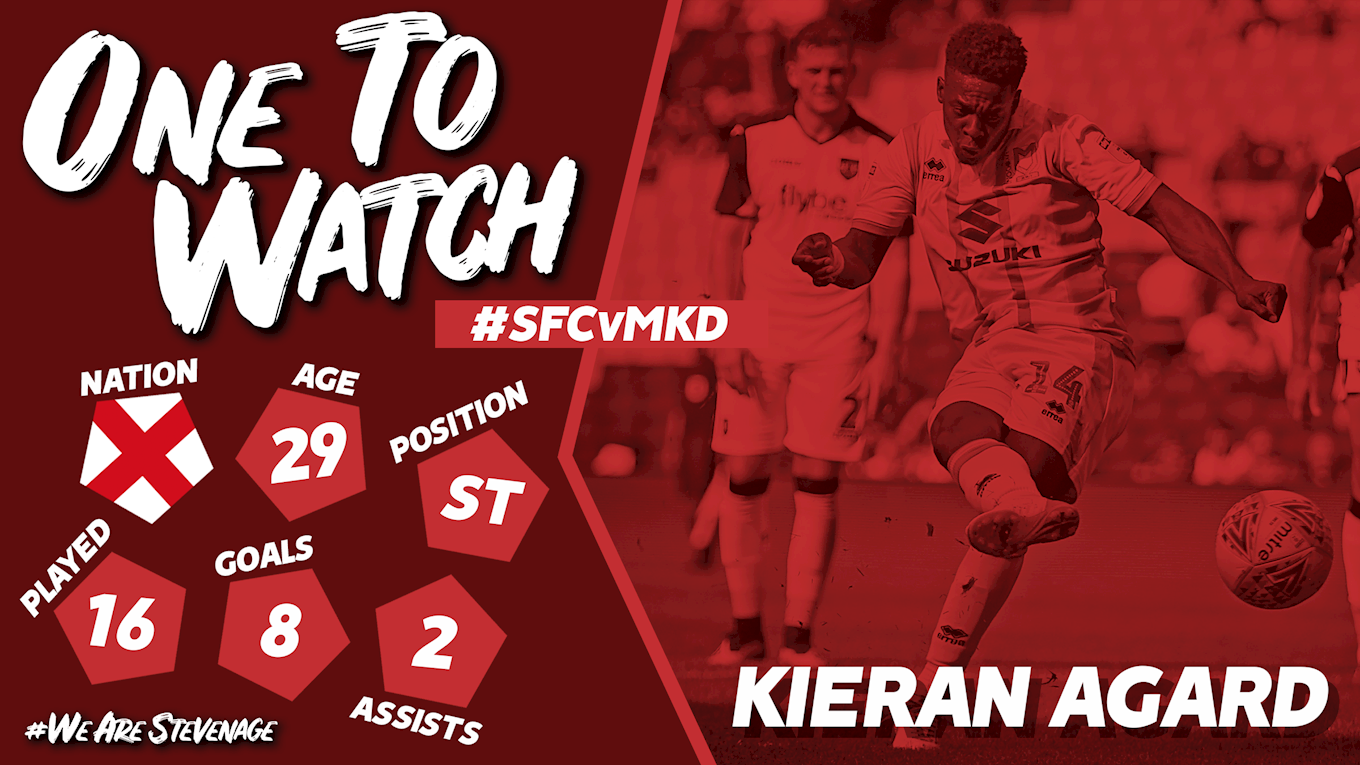 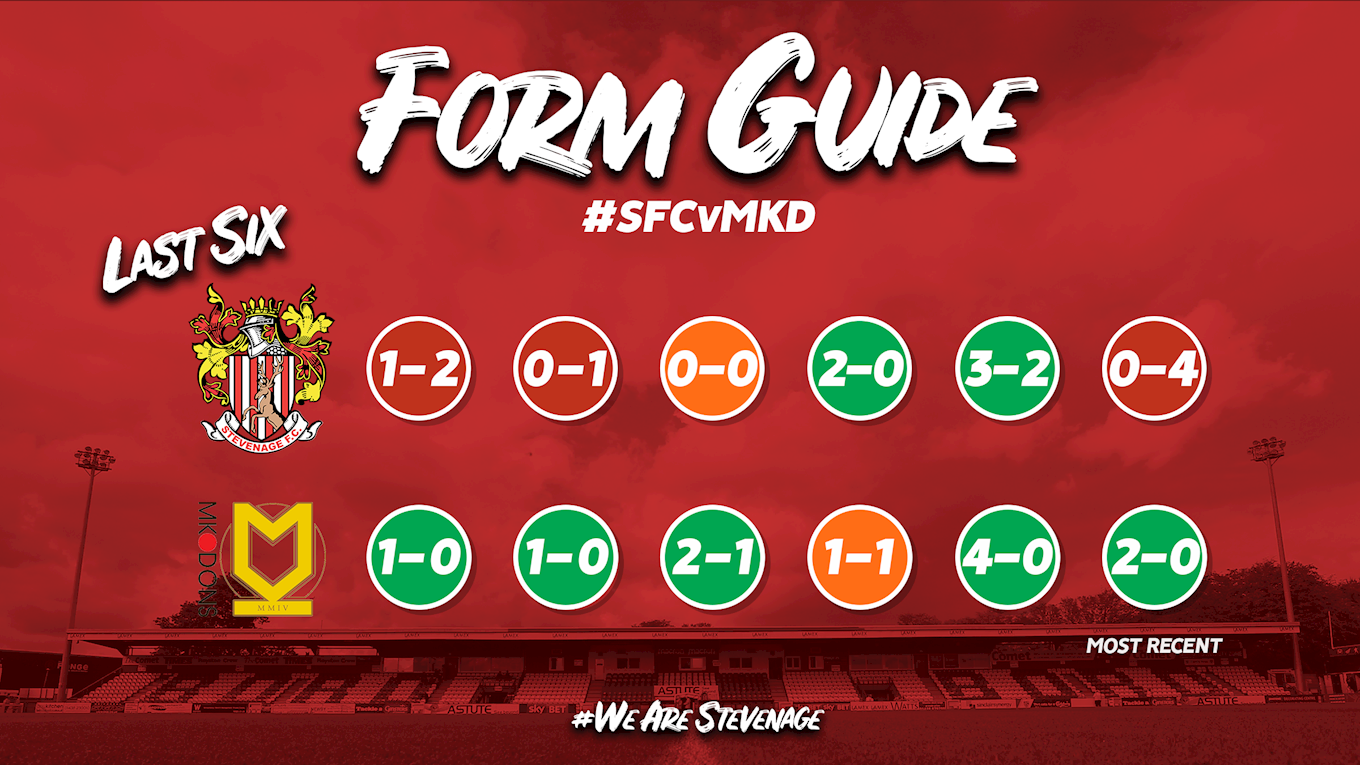 "I am excited for the fans more than anything else, I think we all are," Dino Maamria said when discussing the weekend's game.

"Our last home game had a fantastic finish to it, we were 2-1 down and we turned it around in ten minutes to win 3-2.

"It was a fantastic finish to the game, an emphatic victory and I think it was one that everyone in Stevenage would remember and hopefully they will come back in their numbers. As I said, the game doesn’t need any publicity because it is a huge game, not just a local derby." 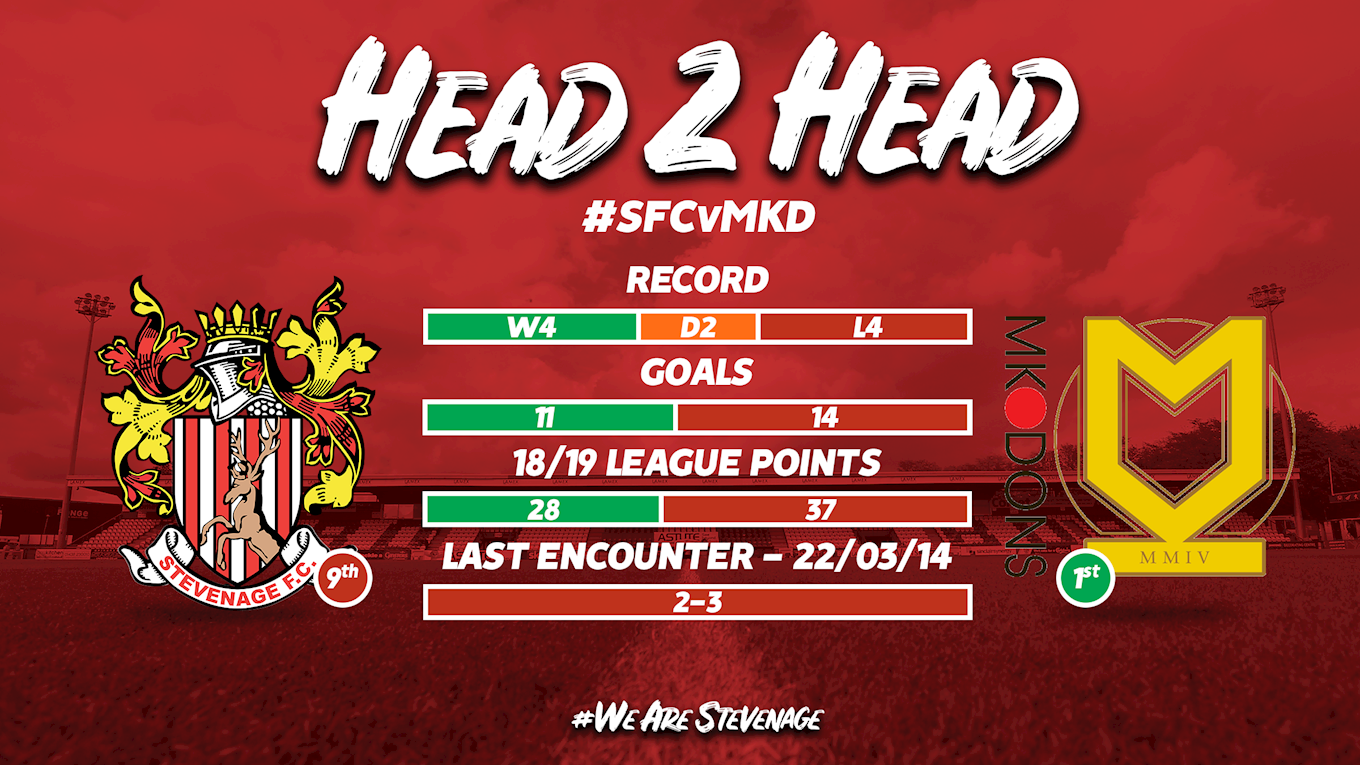 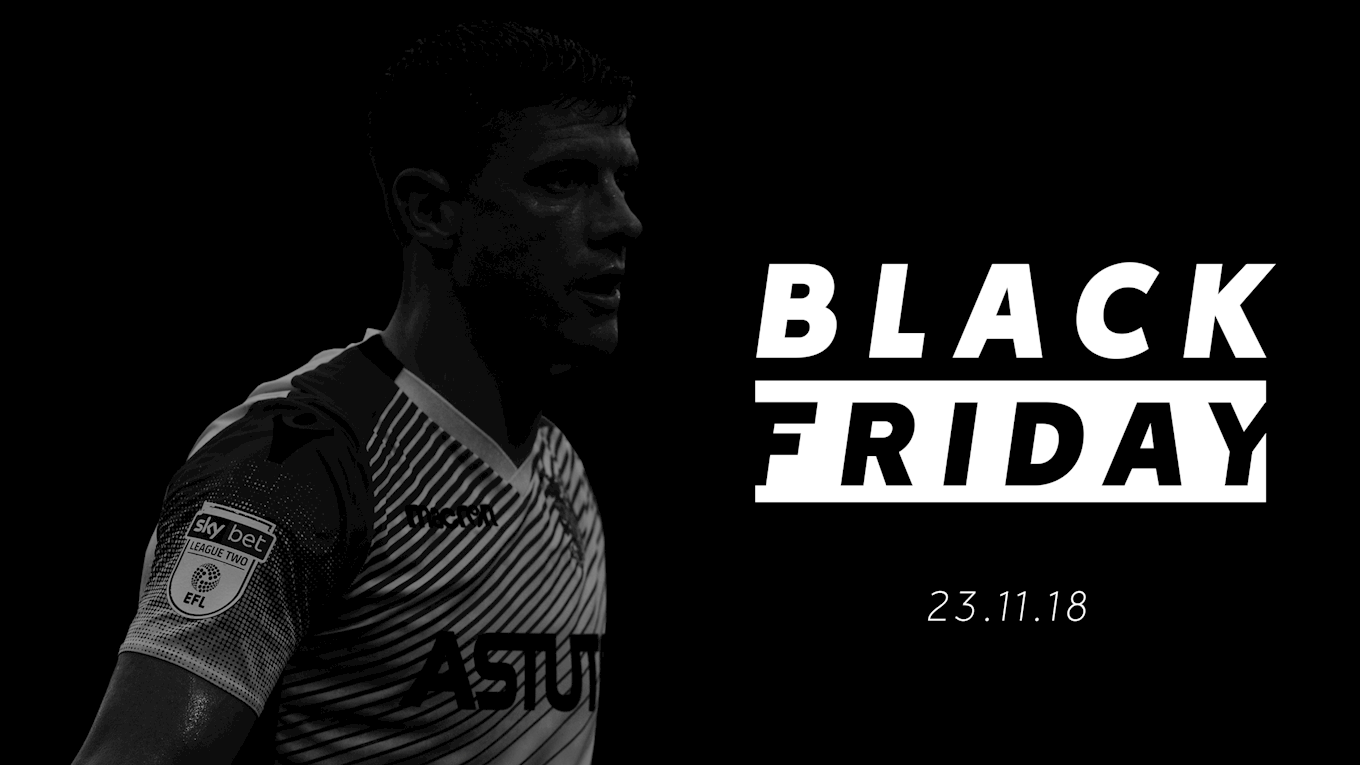 Stevenage showed guts and glory against previously top-of-the-table MK Dons on Saturday to come back from behind in the final minutes to win 3-2...

In a game that had lived up to the pre-match billing, the scoreline swung both ways before a last-minute Kennedy free-kick sent the Lamex Stadium wild.

After taking the lead through Steve Seddon in the first half, the visitors struck back before the break before Agard’s second half header looked to have wrapped up the result.

As time was dwindling down, Boro refused to be beat and it was centre-back supermo Scott Cuthbert who scored the all-important equaliser with less than 10 minutes to go before Kennedy’s perfect free-kick came crashing in-off the bar as added time was being tallied.

Dino Maamria named three changes to the side that lost at Bury last weekend, recalling Kennedy, Nugent and Seddon into the starting line-up for Guthrie, Wilkinson and Ball.

Sitting afoot the Sky Bet League Two table, you would expect MK Dons to come out strong and that’s exactly what they did at a chilly Broadhall Way. Chuks Aneke saw an early change go begging for the Dons but on the whole, the visitors were kept quiet aside from a 12th minute disallowed goal as Agard smashed in from an offside position.

Stevenage were slowly growing into the game and on the 21st minute, went ahead. Steve Seddon applying the finishing touch to a swift counter-attack as Kennedy and Revell combined before the striker nodded across the six yard box for Seddon to do the rest.

It took less than 10 minutes for the Dons to strike back. Rhys Healey with a superb curling finish into the bottom corner that left Seny Dieng no chance.

Both sides went to and fro for the remainder of the half. Kennedy, a constant threat with his runs behind was making things happen for Stevenage but in the end, home fans were relieved to go into the break level after an almost calamitous series of events almost saw the Dons take the lead right on the stroke of half-time.

Stevenage came out the stronger of the two sides to start the second half and it was that man Steve Seddon at the heart of the goal-mouth action. First up the Birmingham loanee skewed his chance after Campbell-Ryce put the ball on a plate just a few yards out. Minute later another counter-attack, led by Kennedy saw another chance presented to the wide-man, this time the ball coming just behind him and therefore unable to get a clean shot on goal.

The game was played at a slower tempo during the second half, a change that seemed to suit the home side. Healey twice came close to doubling his own goal-tally on 65 minutes. After barging past Hunt to get in-behind at a narrow angle, the MK man tested Dieng with a powerful, low shot that the loan Ranger palmed away for a corner . That resulting set-piece then came back out to Healey, who fired over the bar from distance.

The pressure was beginning to grow and with 70 minutes almost up, Kieran Agard diverted a whipped cross with his head past Dieng to put the league leaders ahead for the first time in the game.

Dons goalkeeper Lee Nicholl’s almost presented an early Christmas gift for a waiting Stevenage striker after Kennedy’s stinging low cross was collected by the keeper. Despite initially losing the ball, Nicholls was able to get back on top of it quickly.

Stevenage continued to press for an equaliser and after the inclusions of Reid and Sonupe into the fray, it was all-out-attack for the remainder of the contest.

It was a strategy that came up trumps with just over 10 minutes to go as Scott Cuthbert grabbed a deserved equaliser with his first of the season. Persistence paying off as Stevenage kept the ball alive in the box, winning the seconds before Cuthbert finding the back of the net much to the acclaim of the watching supporters.

Things were only going to get better. A late free-kick on the edge of the box curled home by Kennedy to win the game in a similar fashion to last time out at home, against Oldham. Seven minutes of added time were successfully negotiated as Stevenage inflicted MK Dons’ second defeat of the season.