Get set for Saturday...

Four points from the past two games has seen Stevenage shoot back up the league table, just two points outside the play-off places and perhaps more interestingly, four points outside of third. 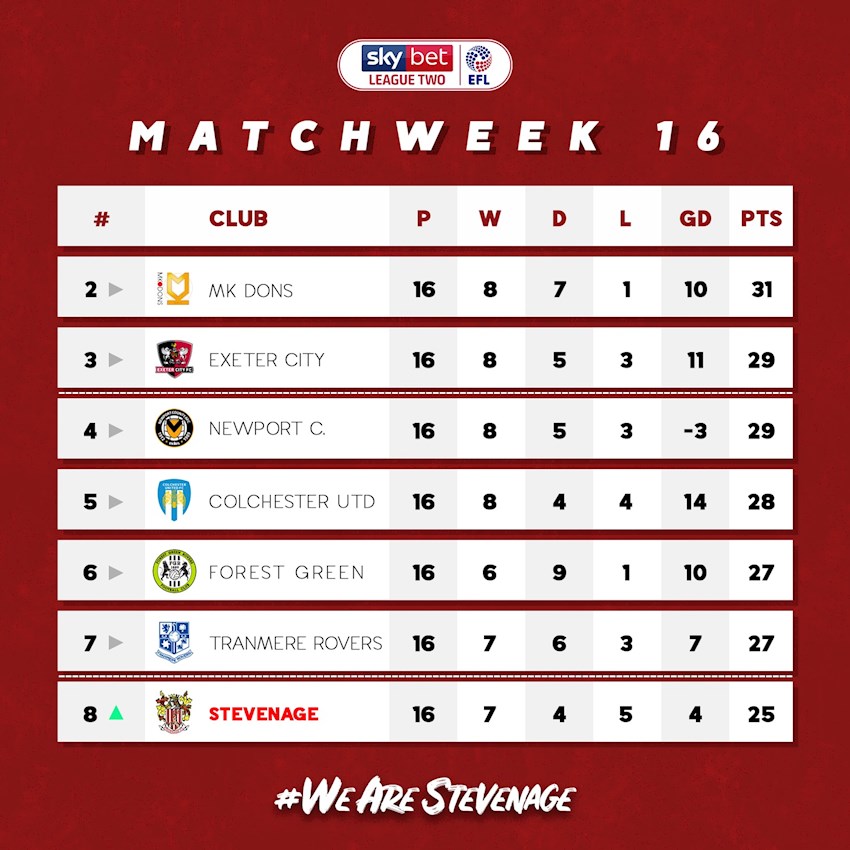 Oldham have enjoyed a solid if unspectacular start to the season with 5 wins, 5 draws and 5 defeats under recently appointed Manager, Frankie Bunn.

Away from home, the Latics have proved to be stubborn opposition after picking up 1 win, 4 draws and just 1 defeat on their travels.

Saturday's opposition have played one game less than most of the division and know that a win on Saturday will close the gap on those in-and-around the promotion places. 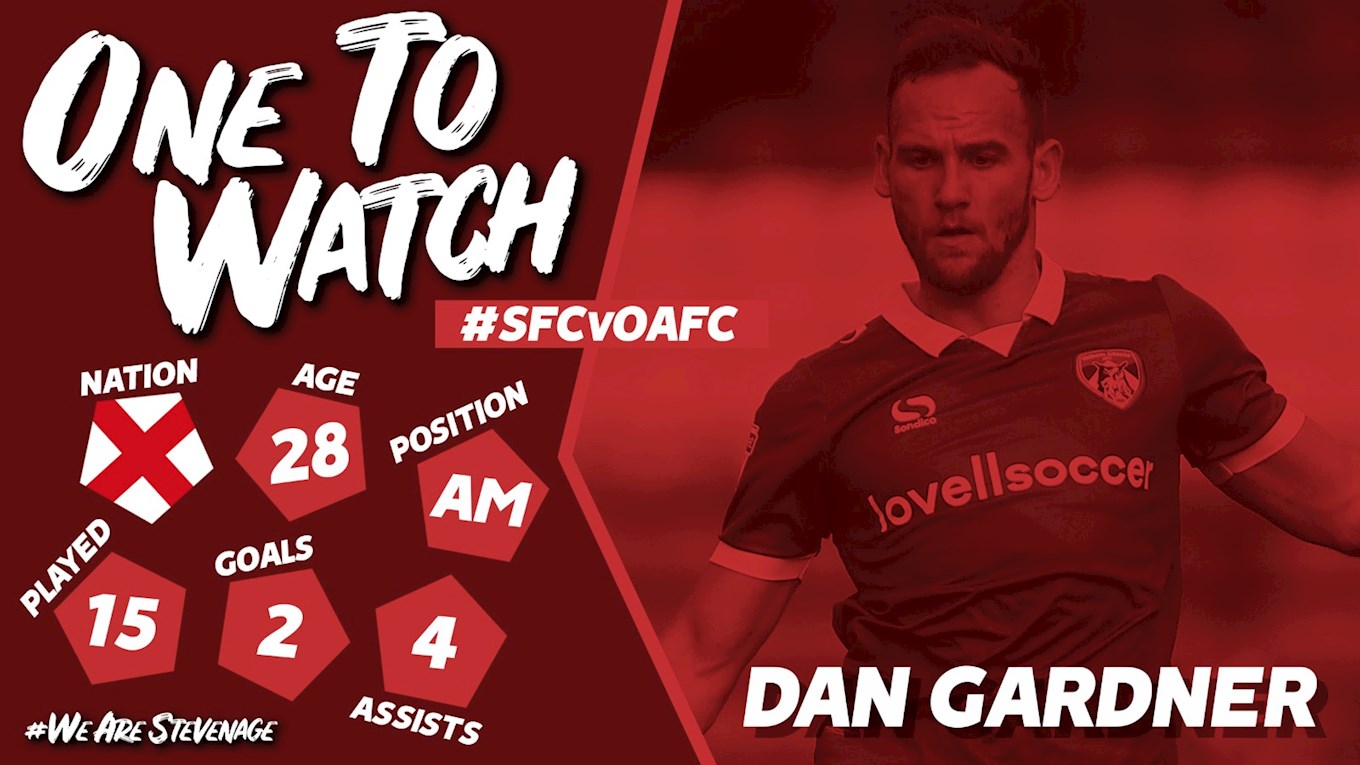 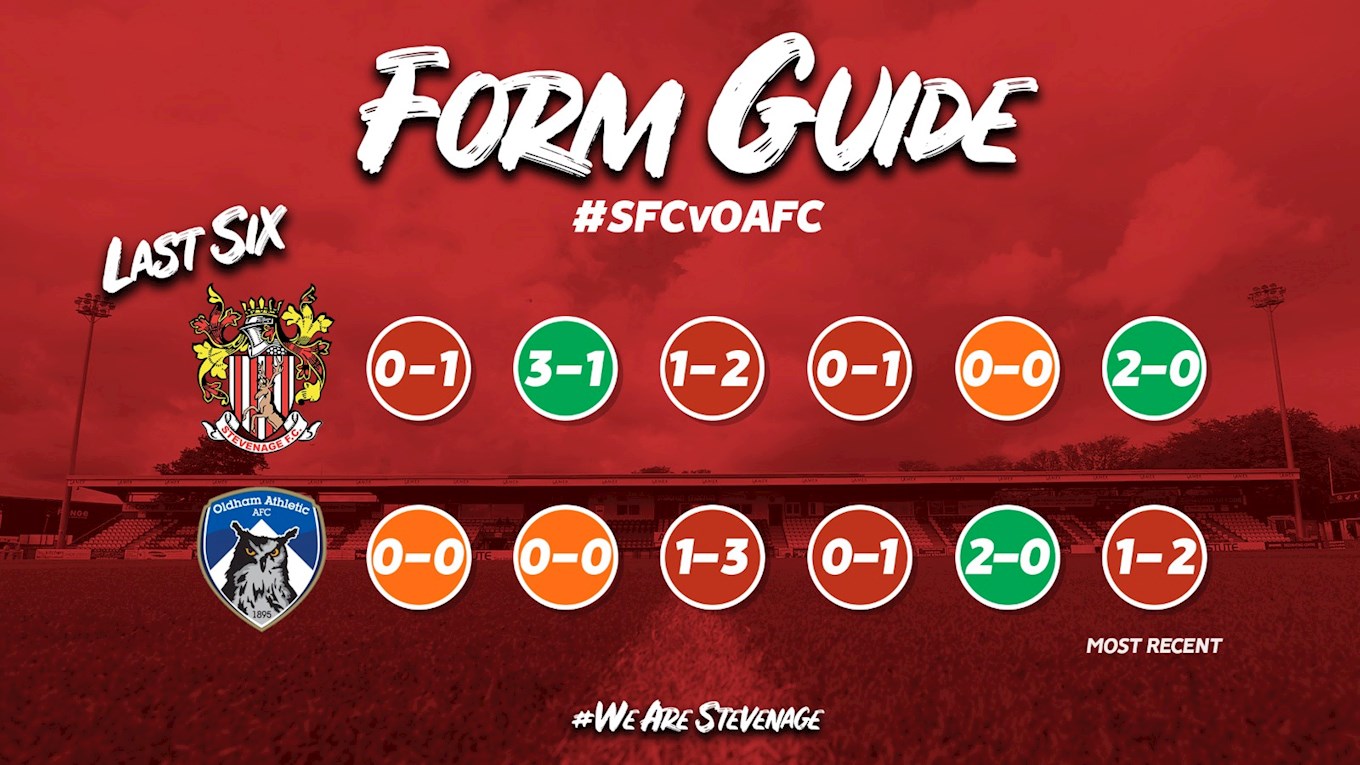 "It is always good to come in off the back of a win, I think you can do a lot more work and the players can take a bit more because of the positivity. They’re willing to do a bit more. So it’s quite constructive but it’s been a good week.

"This weekend is not an easy game. They are a decent team. I have watched their last few games and they are lively, busy, they press teams, play on the front foot." 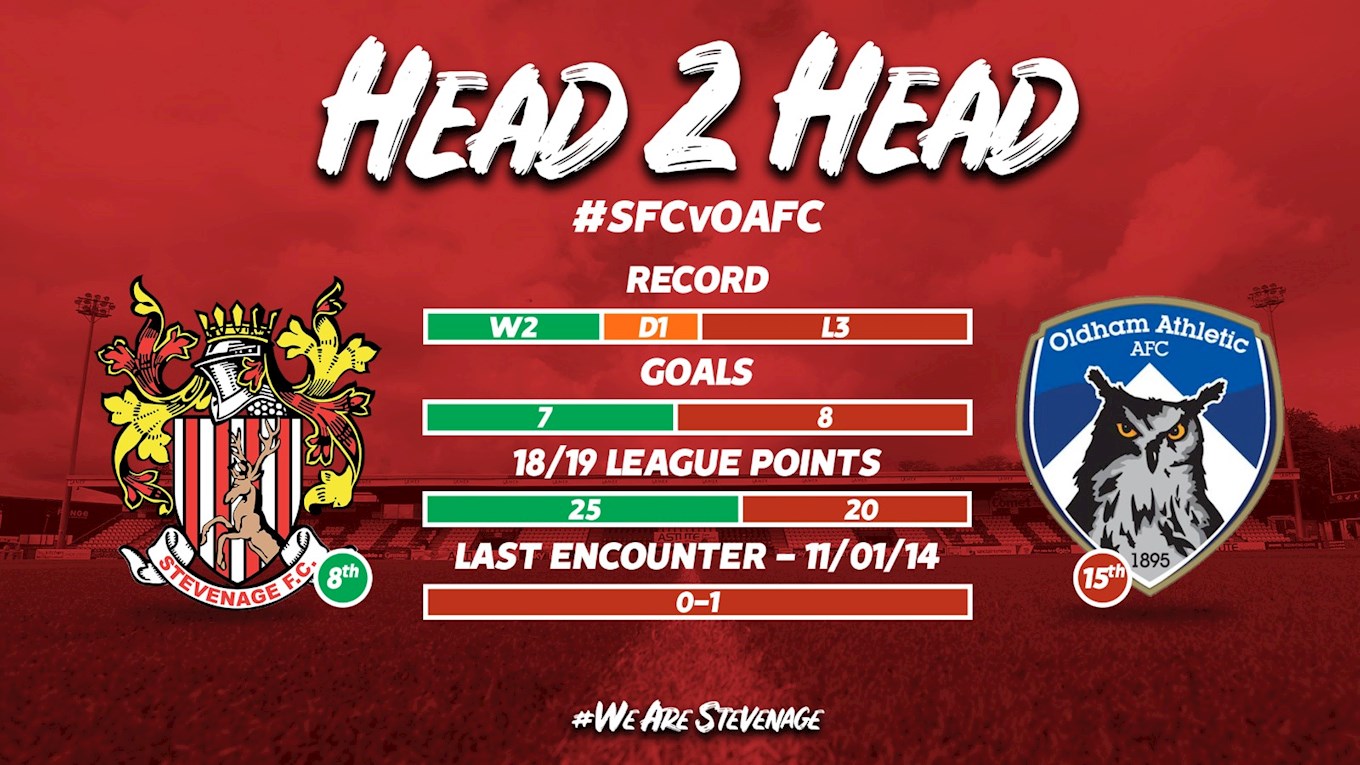 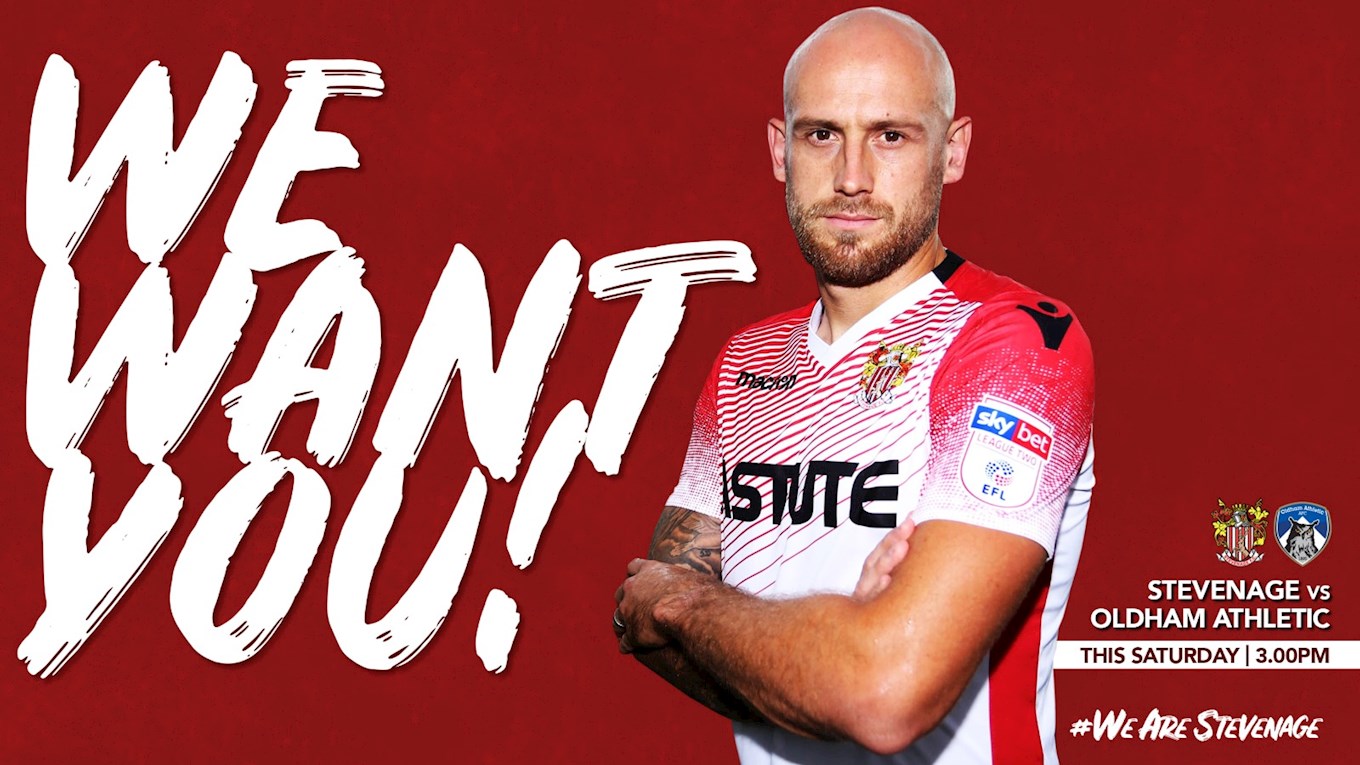 Stevenage produced a memorable comeback in-front of their home supporters on Saturday as they triumped 3-2 against Oldham in a topsy-turvy League Two battle.

After twice falling behind throughout the contest, Boro responded on each occasion before super sub Danny Newton headed in the winner with less than 10 minutes to go. The victory moves Stevenage into the play-off places on 28 points.

Dino Maamria named the same starting XI that beat Cheltenham last time out and there was good news on the bench with both Paul Farman and Danny Newton making a return from injury.

The game got off to a frantic start, with Ishmael Miller on the end of two chances inside the opening minute. His first strike from just outside the box deflected wide before the striker prodded over from a dangerous cross at the near-post.

Stevenage replied as Seddon broke down the left before lofting the ball in for Revell, the ball just too strong for the striker, before Byrom got off his own deflected strike from the edge of the box, again flying wide.

Despite the two early warnings, it was Ishamel Miller who struck the opener inside the first ten minutes. First to react after a corner became a loose ball inside the box, the big man showed a sharp turn and shot from just a few yards to make it 0-1.

Down but not out, Stevenage went in search of a leveller and came inches away on 20 minutes as Revell’s header forced Iverson into a sharp stop, pushing it over the bar following Hunt’s well-picked out cross.

It didn’t take too long before Boro got back on equal footing. Joel Byrom busting a gut to get on the end of a stray ball with a sweet strike from the edge of the box, low and into the bottom corner to make it 1-1.

Neither side created much in the minutes that followed but Latics centre-back, Peter Clarke, had his head in his hands on the stroke of half-time as he sent his header just over the bar.

Luke Wilkinson came on for Ben Nugent during the break and it was that man Miller in the thick of it right from the off, sending a header wide from 10 yards out.

After a few weeks away from the action, Kennedy and Newton replaced Campbell-Ryce and Hunt with over 30 minutes to go, looking to provide a spark to their teammates.

Unfortunately by the time the substitutes could get themselves warm, Stevenage found themselves a goal down once again. Lang providing the final touch after Nepomuceno fired the ball across the six yard box.

Once more, Maamria’s men responded. Newton providing said spark to drive the ball inside onto his left, letting off a shot which took a deflection into the air, for Guthrie to head home his third in five games

After coming back from behind twice already, Stevenage were in the mood to complete the job and began to pile the pressure on as the game headed towards the final stages. Newton again using his drive to get to the by-line before laying across a wonderful ball across the six yard box, which was just too strong for Guthrie to connect with.

It was Newton that eventually grabbed the headlines, heading in from the back-post amongst a crowd of bodies to send the Lamex Stadium into raptures. A moment that clearly meant a lot to the striker, who enjoyed the adulation after a couple of months out with injury.

Oldham failed to really threaten Stevenage throughout the closing stages as the team shut the game down to come out 3-2 winners in a breathless game of football.

Stevenage are back home on Saturday 3rd November as Oldham Athletic are next up to visit the Lamex Stadium.

Fresh off the win against Cheltenham, Dino Maamria's squad are just two points outside the play-off places and four points outside of third going into next Saturday's home clash.

It has been four years since Boro have faced the Latics, following their relegation from Sky Bet League One last season and standing tickets in the famous East Terrace cost just £15 for Adults and Concessions, whilst it costs just £10 for U18s and £5 for U12s.

Also - past & present members of the Armed Forces can come to the game for just £5 as part of our Forces for a Fiver Remembrance Fixture promotion. We have a whole host of activities going on to mark the occasion - click here for more. 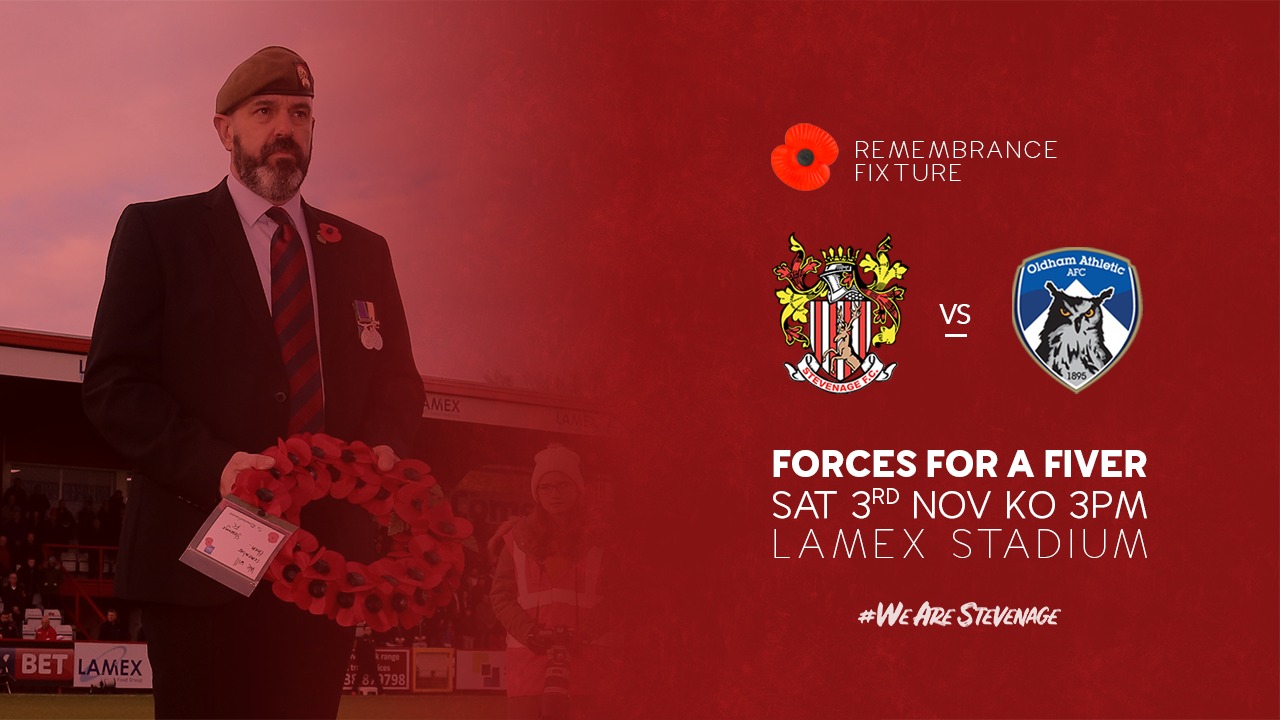