Dino Maamria's Stevenage squad head to Swindon ahead of a mini-break...

Tickets are available for Stevenage fans from the County Ground at the following matchday prices:

Unfortunately the Supporters Association Coach will NOT be running for this fixture.

Click here for an away fans guide to Swindon Town FC.

Swindon Town has two official car parks open on a Matchday. The County Ground itself has limited spaces available for £10 whilst the St Joseph's School Car Park is a five minute walk from the stadium and costs £5.

Can't make the trip West? Get behind the boys from with an iFollow Match Pass, available for just £10. 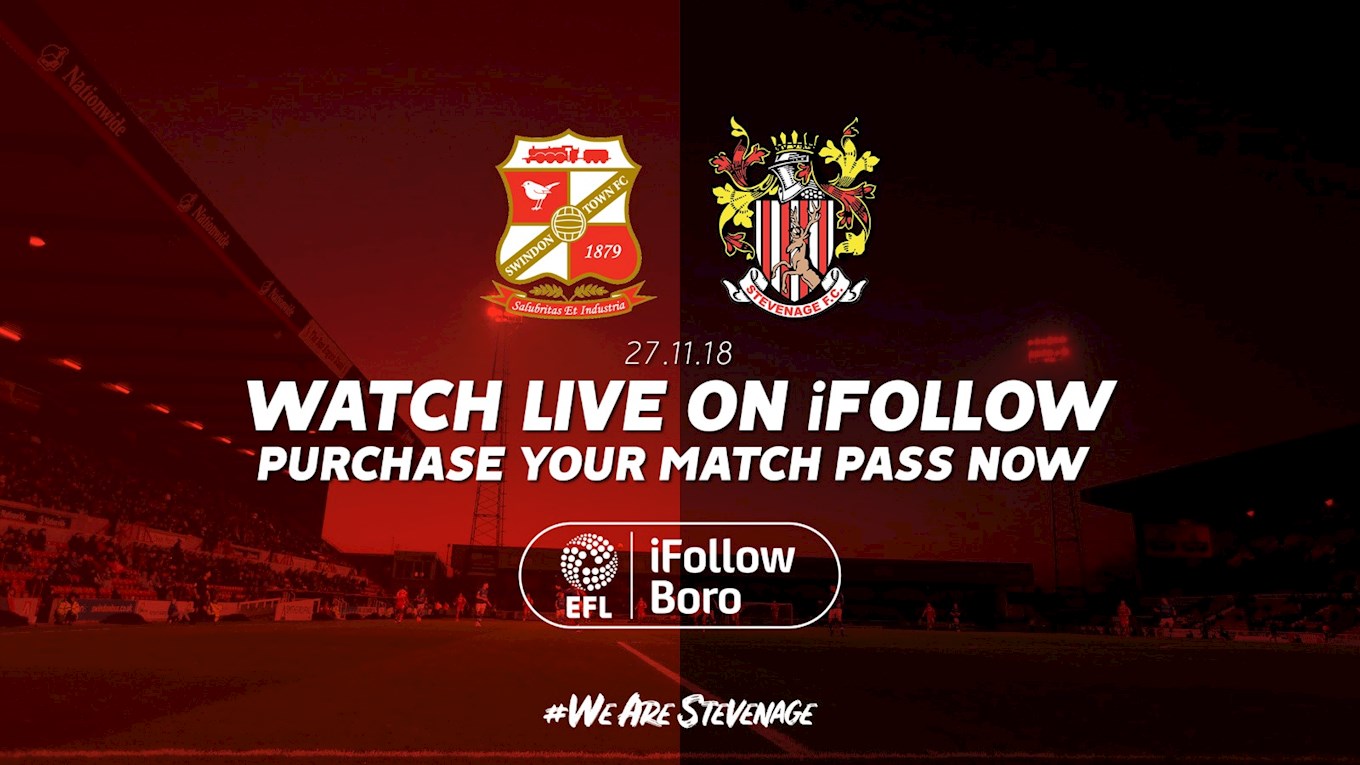 Hundreds of you have already signed up for a Match Pass this season, available for all games outside of the 3pm Saturday kick-off, and we are pleased to say that the feedback has been fantastic so far.

Saturday's big win over MK Dons has only gone to tighten things up even further at the summit of the Sky Bet League Two table.

Boro's away form has been middle-of-the-road this season with 3 wins, 2 draws and 4 defeats, the last victory coming at Cheltenham a month ago. 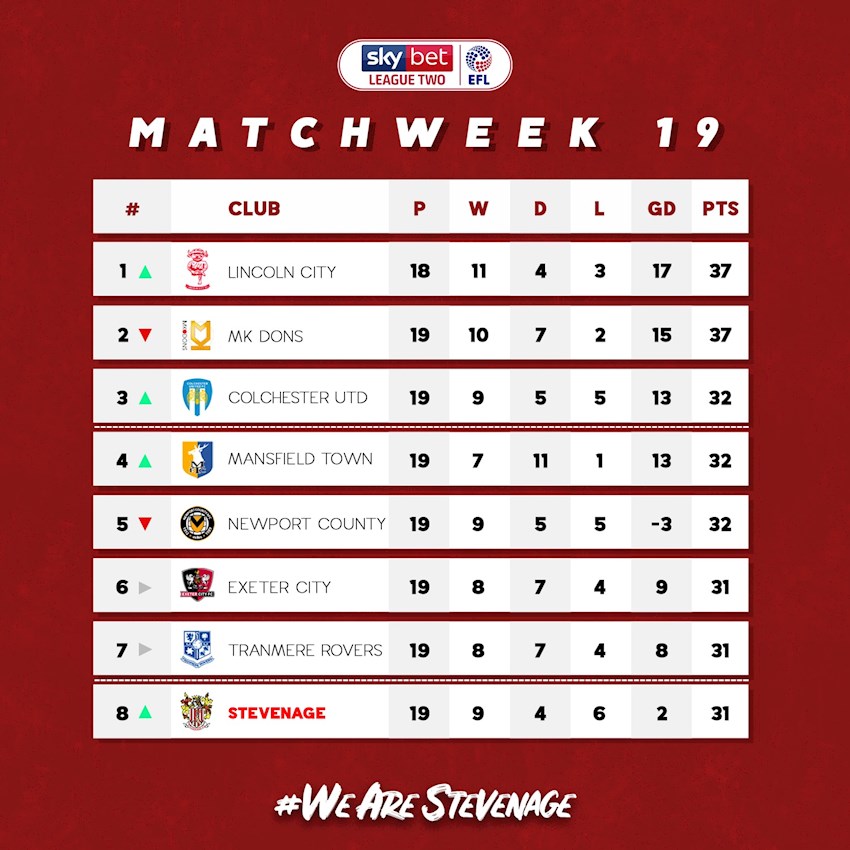 A slow start to the season for Swindon saw Phil Brown lose his job, making way for Richie Wellens who picked up his first win for the club on Saturday in his second game in charge, away at Port Vale.

Playing away from home hasn't been a problem for Swindon - 14 points from 10 games is the third best road record in the division.

Closer to home is where the issue lies as only two home wins have been picked up at the County Ground all season. 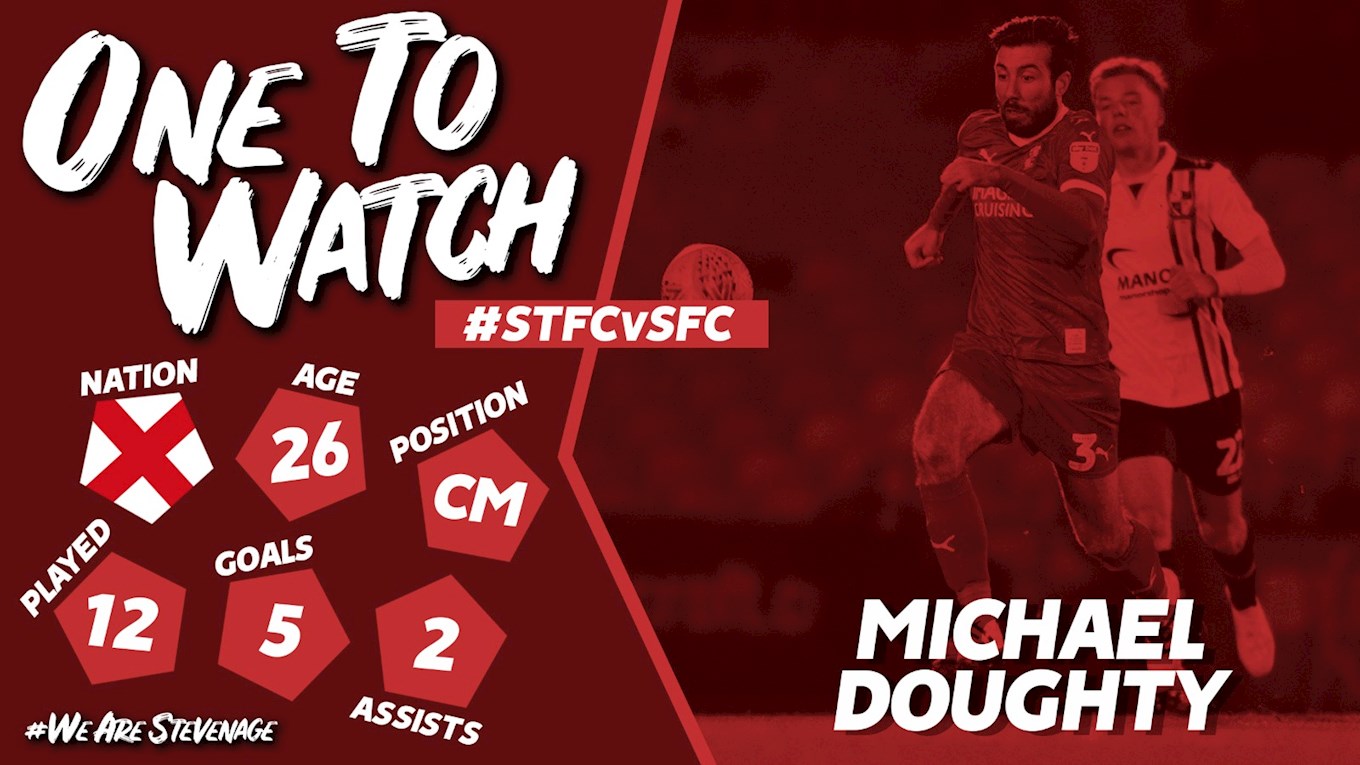 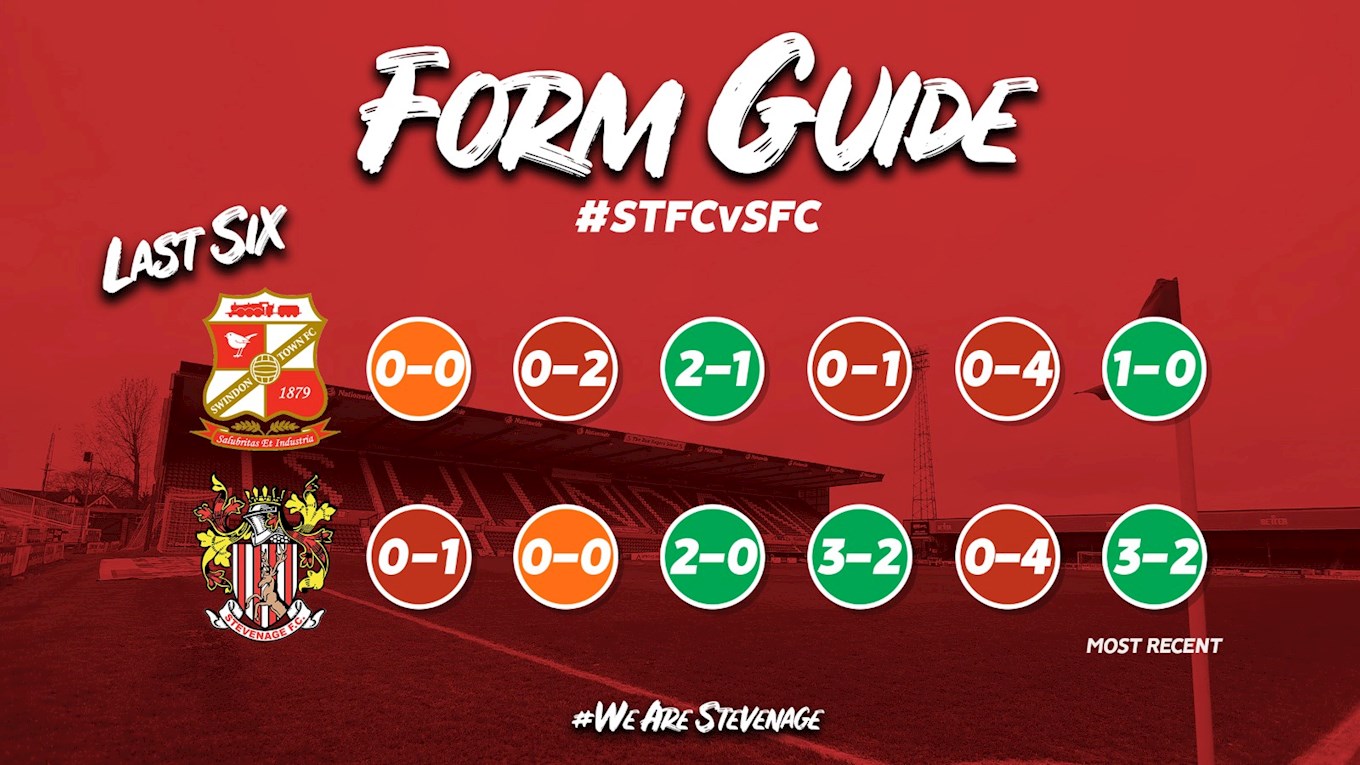 "It would be excellent to go into the free weekend with another win. It will then give our lads the chance of a much needed rest before we attack December.

"We saw what we are capable of on Saturday when we play with confidence and belief and we want more of the same tonight." 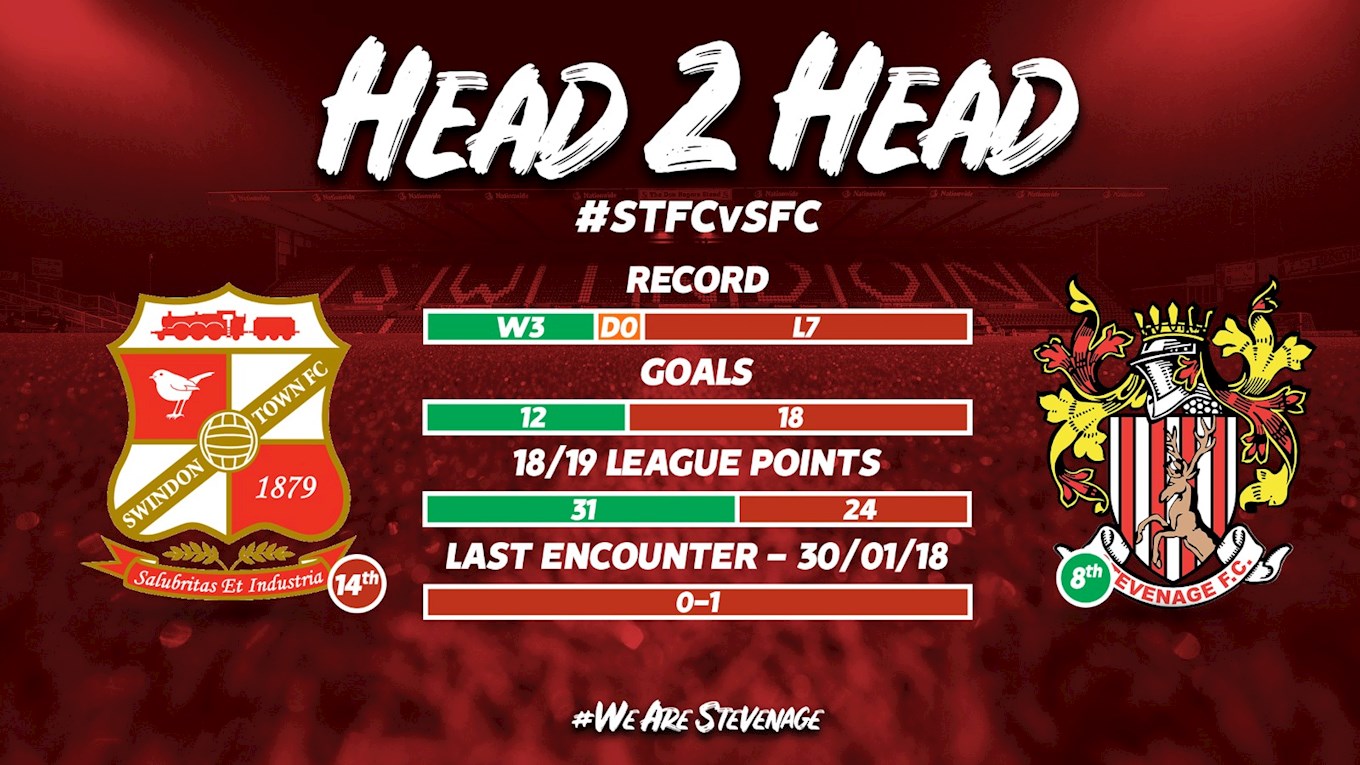 Stevenage head into a nine day period without a gameoff the back of defeat as for the second season in a row at Swindon, a poor start to the game cost Boro any chance of victory...

Two goals conceded in the first five minutes saw an almost-impossible challenge set and despite cutting the deficit on 12 minutes through Scott Cuthbert, a lapse in concentration just before the half-time whistle made it 3-1 at the break.

The second half saw Stevenage mightily improve and after Alex Reid made it 3-2, a grandstand finish was set-up but Swindon were able to see out their second win in succession whilst the weekend's heroics couldn't be repeated.

Boro now have a free-weekend with no FA Cup tie on Saturday and will no doubt spend plenty of time on the training ground ahead of a busy festive period.

Dino Maamria made just the one change to the squad of 18 that were victorious last time out against MK Dons. Ben Nugent was suspended after picking up his fifth yellow card on Saturday, meaning Luke Wilkinson would deputise, whilst James Ball returned to the squad.

Stevenage got off to the worst possible start. Just 18 seconds into his Swindon Town debut, Sol Pryce put the hosts one up. After Boro lost the ball from the opening posession, Keshi Anderson slid in ex-Boro midfielder Michael Doughty down the right flank, who put in an undefendable cross for the new Swindon signing to finish.

Matters were then made worse inside five minutes as the Robins went 2-0 up. Dieng unable to deal with Matt Taylor’s free-kick as it came out to Scott Twine who had the simplest of finishes.

Facing an uphill battle, Stevenage responded well and were back in the game on 12 minutes. A clever headed pass from Byrom set Kennedy into position on the left, whose whipped ball towards Cuthbert at the back-post was right on the money, allowing the Scotsman to score his second goal in as many games.

For what was a breathless opening 15 minutes to the game, both sides began to settle down and looked to gain control the middle of the park. The half hour mark saw striker Alex Reid replace Jamal Campbell-Ryce as Maamria searched for a winning formula.

Ben Kennedy was the hero on Saturday, and was looking again to be the influential attacking player for Boro at the County Ground. The attacker picking up the ball from deep and making things tick, causing the Swindon back-line problems.

As the half was beginning to draw to a close, Stevenage began to push the opposition back and Kennedy could have levelled things up. After gaining possession 35 yards from goal, the Northern Irishman turned on a sixpence to drive towards the opposing goal. On his favoured left foot, Kennedy struck from the edge of the box but ex-Liverpool goalkeeper Lawrence Vigouroux was ready for the strike and tipped it around the post.

Right back down the other end, Keshi Anderson struck the post, with almost a carbon copy of Kennedy’s effort, and the ball was eventually cleared much to Boro’s relief.

Just as it seemed that Boro would head into the break only one goal down, the worst possible finish to the half occured as Swindon made it 3-1. Sol Pryce released through on goal down the centre of the pitch before finishing comfortably past Dieng.

With a two goal lead to sit on, Swindon looked to soak up the action in the second half as Stevenage dictated proceedings, desperate to breathe life into the game once again.

Reid and Seddon both saw decent opportunities blocked inside the first 15 minutes of the second period but with so many bodies committed forward, space was also opening up down the other end for Swindon to exploit.

Dieng kept Stevenage in the game with a brilliant save on 65 minutes, keeping out Woolfenden's header towards the back-post with a fine reaction stop.

That pressure finally paid off with 13 minutes to go as Joel Byrom arrived late to smash in Stevenage's second of the game, via a deflection off Alex Reid that sent Vigouroux the wrong way.

Nerves were jangling all around the County Ground as Boro pushed for a leveller but the home side were dogged in their resistance and in the end, were able to hold onto all three points.

Next up on the road for Dino Maamria's squad is a midweek trip to Swindon Town on Tuesday 27th November 2018.

A difficult start to the season for the Robins has seen the club recently part ways with Manager Phil Brown, bringing in Richie Wellens to help steer the ship forward.

Tickets are available in-advance from borotickets.co.uk or from the away ticket office, located next to the away turnstiles, on the day of the game.

Click here to find out more about Swindon Town for away fans.

Swindon Town has two official car parks open on a Matchday. The County Ground itself has limited spaces available for £10 whilst the St Joseph's School Car Park is a five minute walk from the stadium and costs £5.

Unfortunately the Supporters Association Coach will NOT be running for this fixture.