All the key info ahead of Saturday's trip...

Tickets are available for Stevenage fans from Jonny-Rocks Stadium at the following matchday prices:

There will be cash ONLY sales on the turnstiles, whilst card sales will be available from the Cheltenham Town Ticket Office.

Need a lift to the game? The Supporters Association Coach leaves the Lamex Stadium at 10:30am and costs £25 for non-members and £20 for SA members.

Stevenage will be looking to improve their after a dip in form has seen the team pick up just one win from the last five games. A scoreless draw with Port Vale on Tuesday and a 1-0 home loss to Crewe last weekend means Boro have dropped down to 10th in the table, although just two points off the play-offs.

Saturday will be our third trip to the West Country this season, after outings to Forest Green, Yeovil Town and Exeter City. Having failed to score in each of those games, Stevenage will hope to break their Western duck against second-bottom side Cheltenham.

Languishing in 23rd, The Robins are still yet to win a home league game this season and unsurprisingly sit bottom of the home table with such a recrd. With only two wins away in total, Cheltenham will be looking at Saturday’s game with a view of winning three important points. 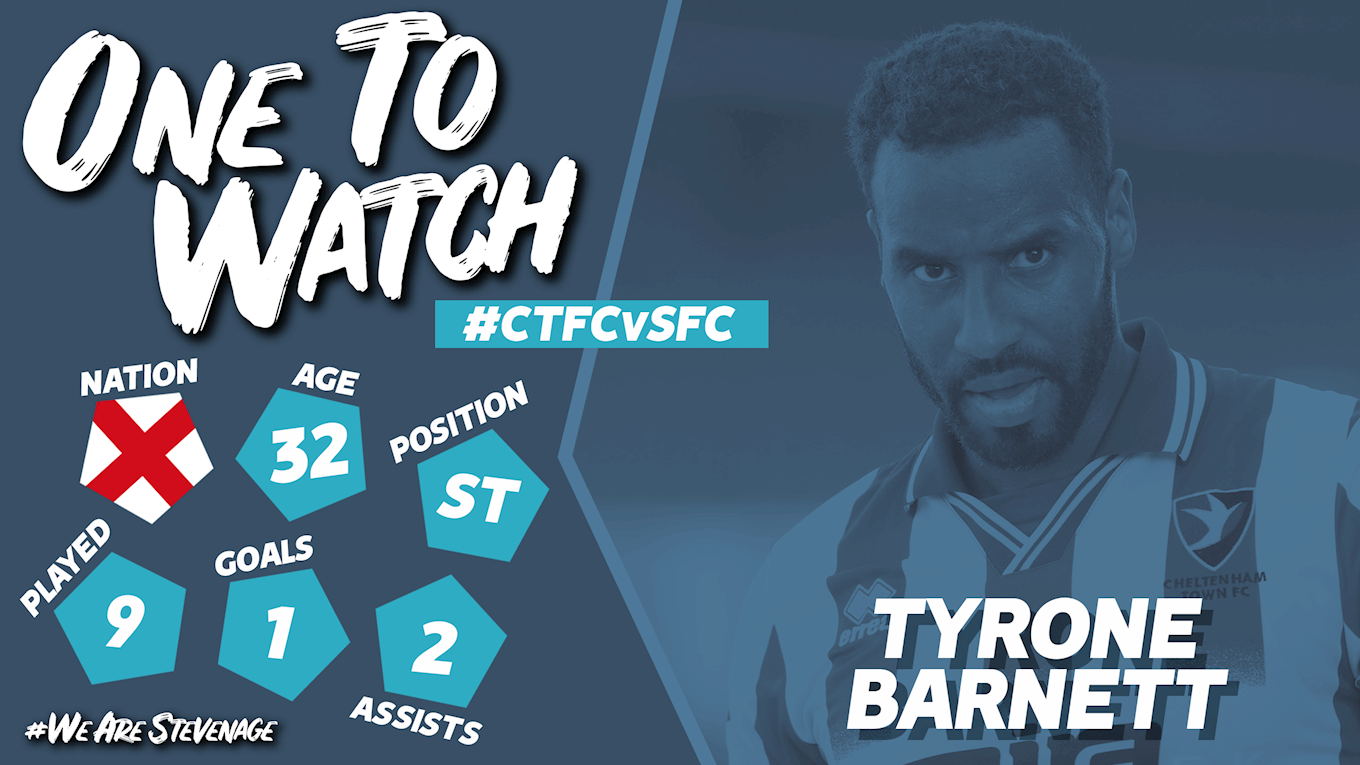 Paul Farman remains sidelined with a hand injury, while Danny Newton is 50/50 to return, after picking up a knock in training last week. 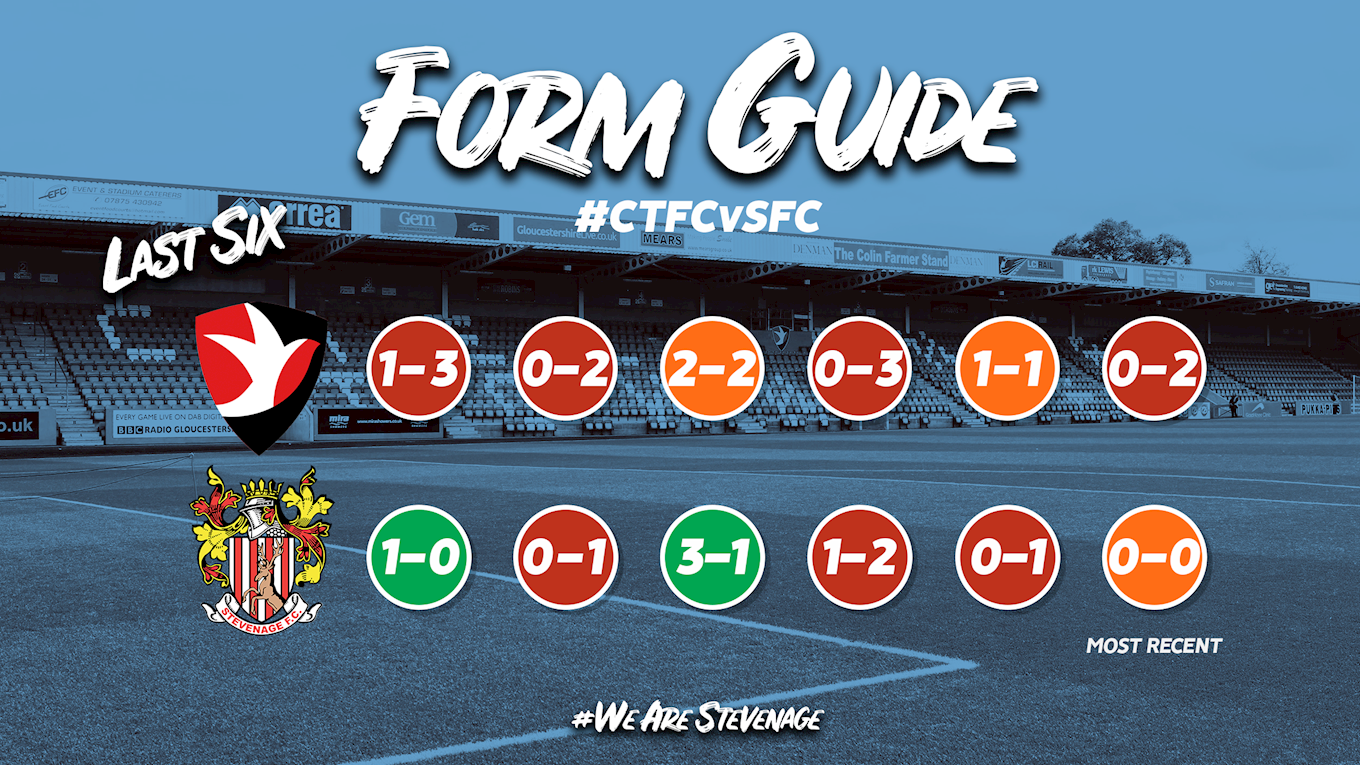 “Yes we haven’t scored as many goals as we would have liked to but it is a process and I am not worrying about that.  As a defence we look solid, we defend well, we stay in games and we keep clean sheets. Going forward we create a lot of chances which is never a bad thing as any minute things will click and we will be scoring four or fives.” 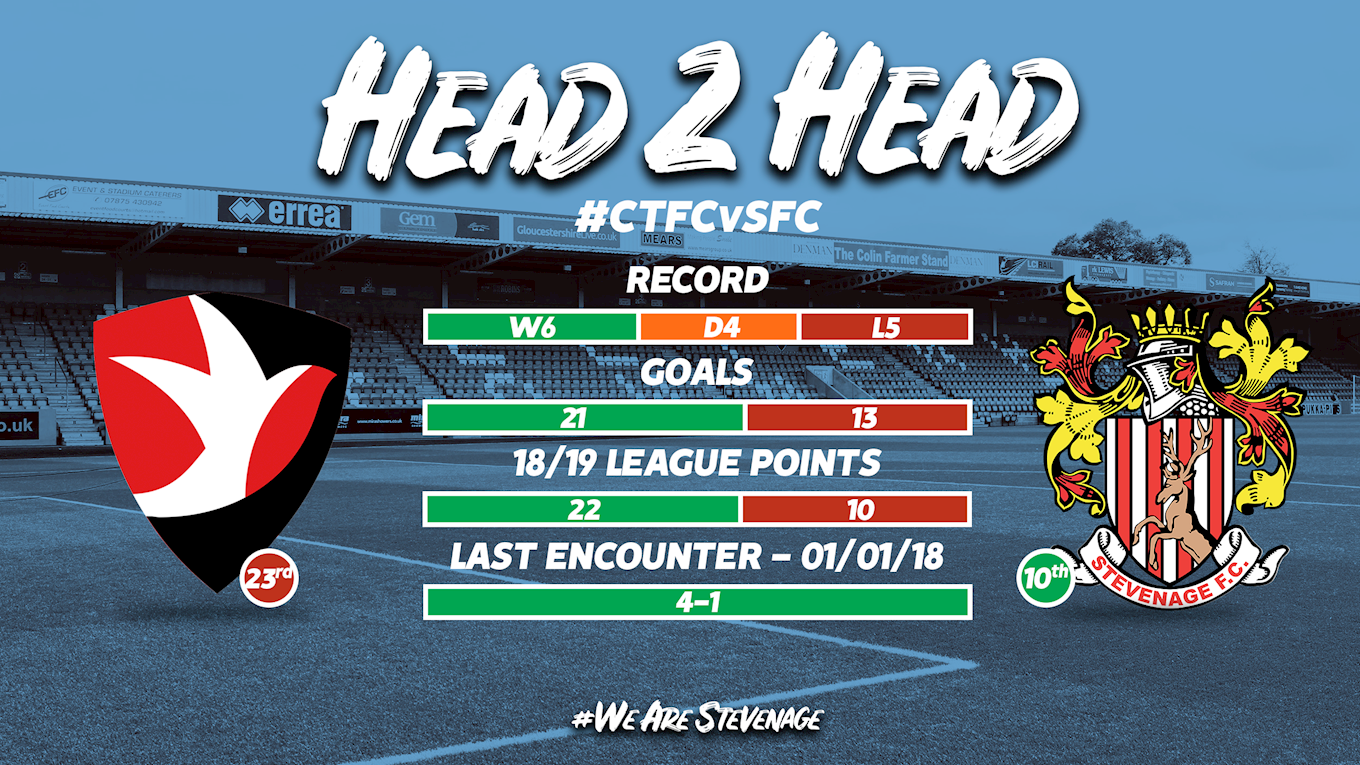 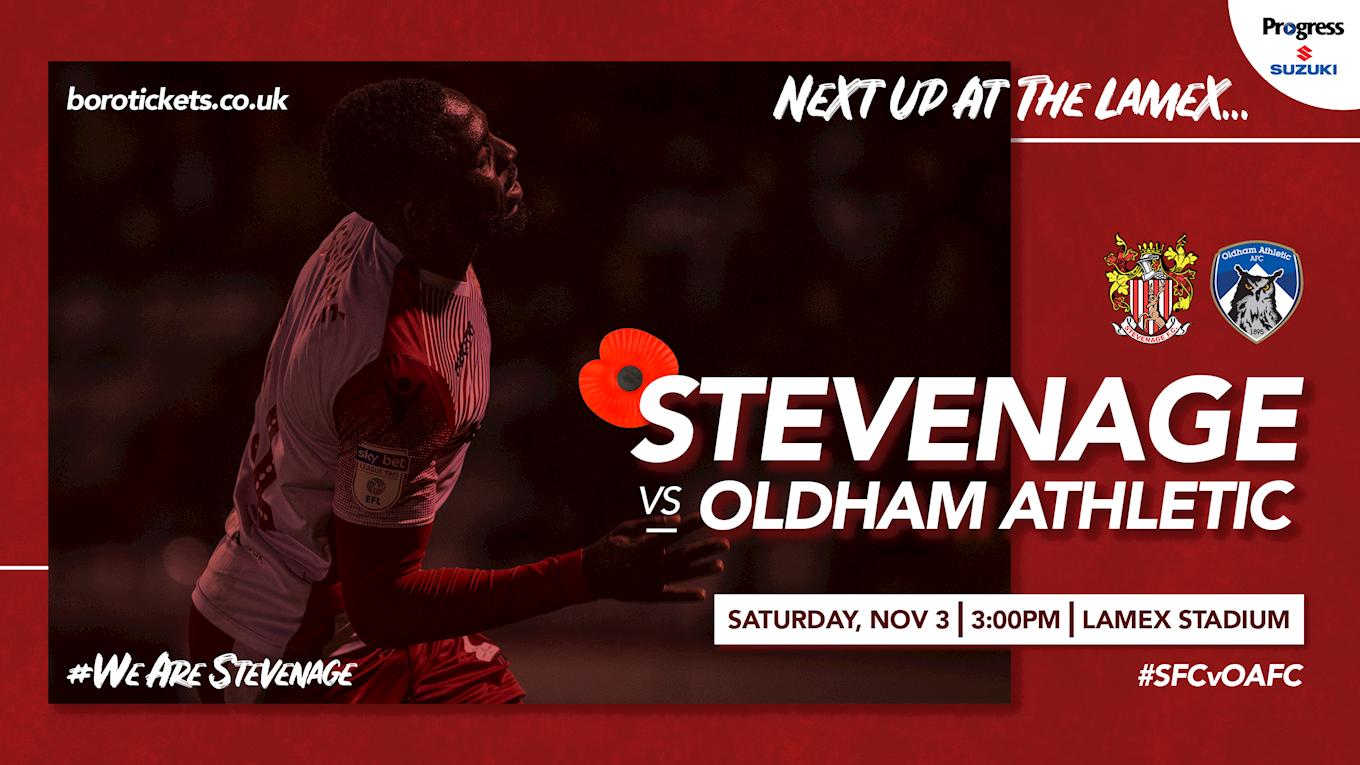 Three points on the road...

Stevenage got back to winning ways at the Jonny-Rocks Stadium as first half goals from Kurtis Guthrie and Steve Seddon made the difference in a dominant display.

Dino Maamria named two changes to the side that drew at home to Port Vale on Tuesday night, bringing Ben Nugent back in following his one game suspension whilst John Hunt slotted back into his usual left-back slot with Seddon playing ahead of him in midfield.

Right from the start it was clear which team was the most likely to take control of the game. Stevenage were a constant menace to the Cheltenham back-line, particularly in the air as cross after cross tested the Robins defence.

Eventually that strategy would pay dividends as Guthrie rose highest from just a few yards out to nod in from Campbell-Ryce’s cross, netting his second league goal of the season.

A few minutes later Guthrie was at the centre of it again, this time knocking the ball down for his strike partner, Revell, but the striker couldn’t keep his effort down as his strike flew over the bar from just a few yards out.

Stevenage’s press meant that Cheltenham were struggling to keep hold of the ball and the pattern of the half remained much the same. Boro winning the ball back quickly, moving it into the attacking thirds before trying to pick out a striker to turn the ball home.

That’s not to say that the Robins didn’t have their moments. A clever corner routine on 38 minutes saw a Cheltenham man peel off the group before scuffing his shot towards the backpost. The home side’s best chance of the half came in the 40th minute though, as Dieng palmed away Hussey’s free-kick which was heading for the top corner.

Right on the strike of half-time, Stevenage got the second goal that their play deserved. Steve Seddon curling the ball beyond the reach of Flinders from inside the box after Boro robbed Cheltenham of possession once again.

Within 5 minutes of the restart, Maamria’s men could have wrapped things up. After beating Cheltenham’s offside trap, Revell and Guthrie found themselves behind the defence but hesitant play from the attackers allowed the opposition to get back, before teeing up Campbell-Ryce who could only hit the side netting from a narrow angle.

As expected, the Robins improved during periods of the second half and veteran Luke Varney should have halved the deficit on the hour mark, after peeling off his man to connect with a pin-point cross, only to header wide of the far-post.

In truth, the home side were mainly restricted to either balls into the box or efforts from distance, as Stevenage worked tirelessly to keep their shape throughout the contest whilst dominating aerially.

Guthrie, growing in confidence, almost caught Flinders off guard with a first time hit on the volley from about 30 yards out, the keeper able to keep track of the ball though as he punched it clear.

The Cheltenham second half comeback was losing steam as Stevenage switched back into cruise control to see out the rest of the contest. Revell, Seddon and James-Wildin could have all added the cherry to the icing, but three points and another clean sheet will make for a perfectly fine tonic to a long journey home.

Next up for Dino Maamria and his Stevenage squad is a trip to Cheltenham as the Super Boro look to get back to winning ways following Tuesday's point at home.

Kick-off is at 3pm on Saturday 27th October and ticket price do NOT increase on the day of the game.

Stevenage have a fine record at Cheltenham in recent seasons and tickets are available at the following prices:

Tickets are available online, over the phone on 01438 223223 or direct from the club shop. Alternatively, pay on the day from the Whaddon Road Ticket Office.

The Supporters Association Coach leaves the Lamex Stadium at 10:30am and costs £20 for SA members and £25 for non-members. 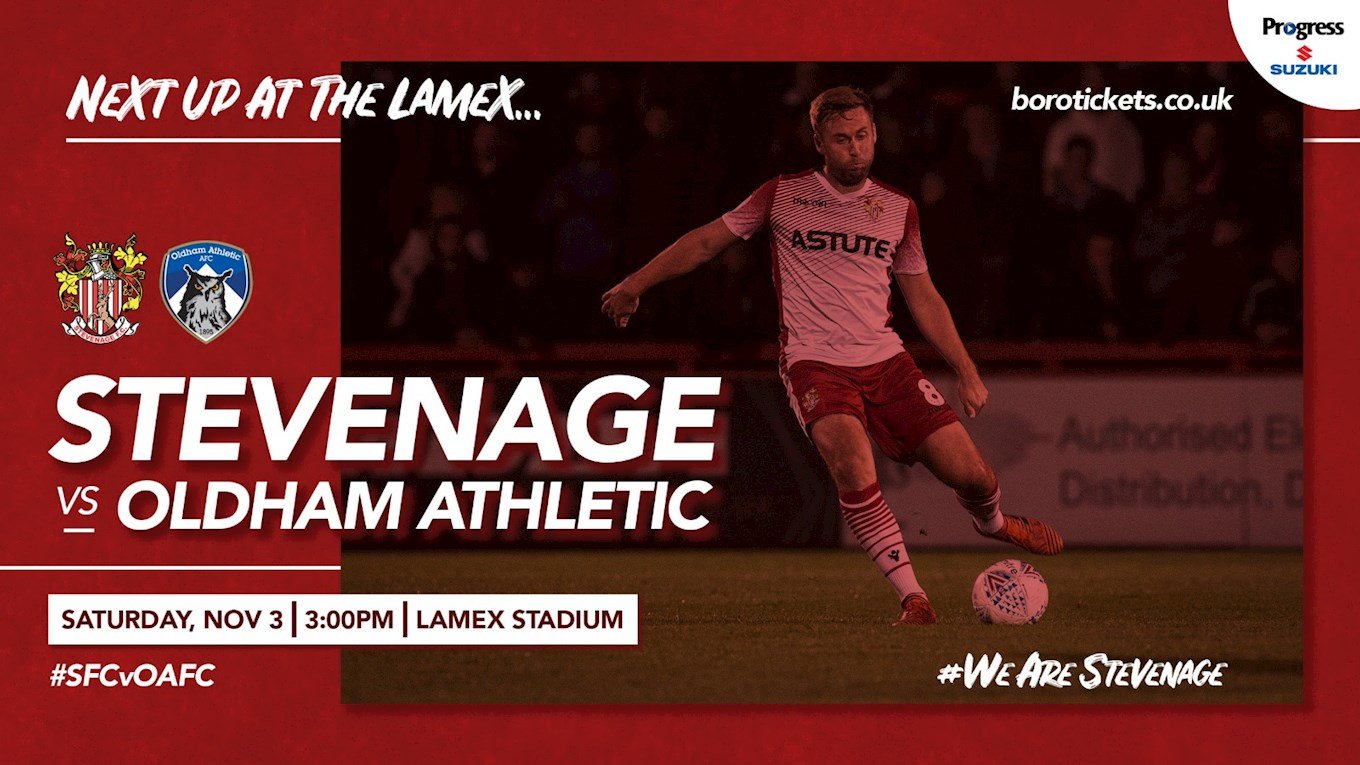