Kick-off is at 7:45pm on Tuesday 2nd October 2018 and tickets are available from the Exeter City Ticket Office on the day of the game at the following prices:

The Supporters Association Coach leaves the Lamex Stadium at 2pm and costs £25 for both SA members and non-members.

Can't face the journey? Don't worry, we don't blame you. Get behind the boys from wherever you are with an iFollow Match Pass, available for just £10. 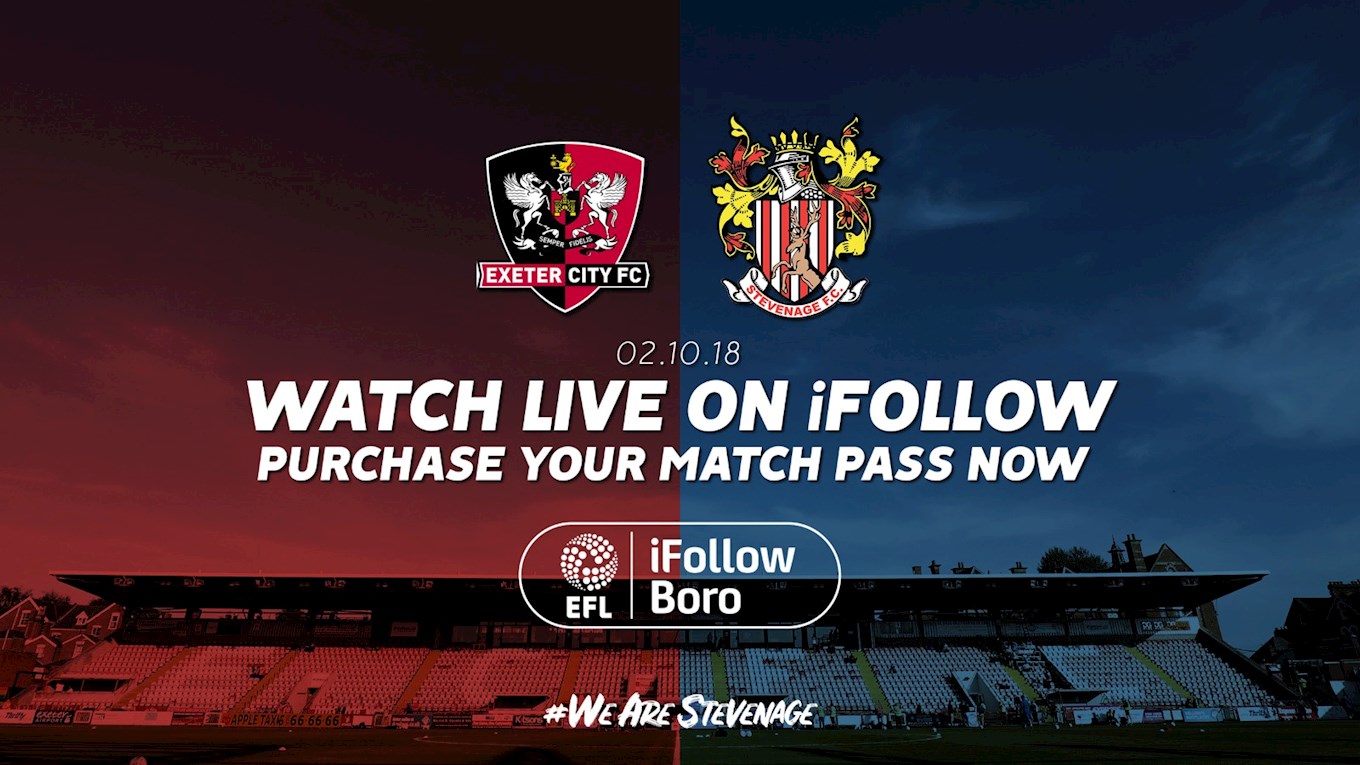 With three points in the bag following the weekend's trip to Carlisle, Maamria's men made sure it was a sweet September with 3 wins, 1 draw and just 1 defeat coming from the month.

The timing couldn't have been better. That record has moved Stevenage up to fourth in the league ahead of crunch games against Exeter (3rd), Colchester (5th) and Newport (2nd) coming up.

So far the key has been a rock-solid foundation, with 5 clean sheets from the first 10 games including four 1-0 wins. Ben Nugent and Scott Cuthbert have formed a fearsome partnership with Steve Seddon and Luther James-Wildin on the flanks.

It's a record that wil surely be tested on Tuesday night against an Exeter side that have picked up 10 points out of 15 from home and are the second highest goalscorers at home in the league, with 12 goals scored from 5 games.

After losing out in the League Two Play-Off Final in each of the past two season's, the Grecians were widely tipped to go one step further at the start of the campaign and their start has surely added credance to that belief.

The boss on breaking into the top four ahead of tomorrow's big game...#StevenageFC #WeAreStevenage pic.twitter.com/OdMuzBwkrW

Stevenage and Exeter have a long history of facing each other than stretches back to the early 2000's when the two sides were battling it out in the Conference.

One of the more memorable meetings in recent years came three years ago when after going behind by two early goals, Stevenage rallied to stage a memorable comeback in-front of the Sky Sports cameras.

It has been a while since Boro last won at St James Park though, you need to go all the way back to a Tuesday night in 2006 when goals from Darren Stamp and Jon Nurse helped Graham Westley's side to a 2-0 win.

Live match commentary will be available for standard iFollow subscribers and make sure you are following our Twitter account throughout the day as we bring you the very latest from St James Park.

Stevenage fell to their first defeat in five games on Tuesday evening as in-form Exeter City squeezed out a win thanks to a stoppage time strike on the stroke of half-time.

Just as Stevenage looked to make it into the break all square, a goal-line scramble in the box was eventually turned in by Dean Moxy to send the Grecians into the break 1-0 up.

The second half saw a huge improvement from Maamria's men as they dominated much of the play, it was in the end though, to no avail as the home side held onto the points.

There was just one change from Saturday’s win at Carlisle – James Ferry taking the place of Emmanuel Sonupe to make it the same side that played out such an impressive second half up in Cumbria.

After such a long journey down to Devon, almost all preparations went out the window inside the opening 60 seconds. A mix-up at the back between Timlin and Cuthbert allowed Exeter marksmen Jayden Stockley to take sight of goal from the narrowest of the angles and if it weren’t for the woodwork, Stevenage would have been facing an early deficit.

Alex Revell was the first to have a shot on goal for Boro but his half-volley inside a crowded box would only sail over the former away end at Barnet’s The Hive Stadium, currently being installed at St James Park.

Stevenage almost got in again a few minutes later as Revell played the backboard-role to lay off a shot for Kennedy, but his first-time strike cannoned into the unfortunately placed Seddon.

Soon after play was halted for five minutes as a medical situation in the stands needed attending to and when the teams came back to the action, it took a little while for both sides to get going.

Stockley was again central to all things good about the Grecians and on 30 minutes, the striker fired over a stinging effort that flew just past Dieng’s crossbar.

Law was next up as he headed over from 6 yards out as Maamria’s men had to ride plenty of pressure inside the first half. Exeter were keeping a high line though and Stevenage looked bright in possession whilst going forward, so you always felt there was an opportunity to counter just around the corner.

Set pieces would always be key. With just a few minutes left of the first half, an imaginative free-kick saw Seddon break free down the left but the Birmingham City loanee couldn’t keep his effort on target.

As the half drew to a close, Stevenage grew more and more confident and by the six minutes of added time were indicated, Boro were patiently knocking it about in the Grecians half until the ball came out for Timlin to strike to wide of the post.

The whistle didn’t come soon enough though. With mere seconds remaining in the half, Moxey smashed in from close range following a farcical goal-line scramble that the defence just couldn’t keep out.

Neither side made any changes to start the second half and the balance of play switched slightly towards Stevenage’s favour as the team enjoyed most of the ball and threat in-and-around the Exeter box. Despite that, the best chance during the early goings came from Boateng following some tricky play by Nicky Law out wide.

Boro were buzzing though and the Grecians struggled to get a grip of the game. Savvy defensive work meant that most of the efforts on goal came from either long range or difficult angles.

A superb first touch from Kennedy, who was getting on the ball more and more, sprung Stevenage into a dangerous looking attack on 65 minutes but after the ball went wide for Newton, his ball across the box for Revell dind’t have the required accuracy and Pym was able to claim.

Sonupe came on for Ferry with 20 minutes to go as pressure continued to build. Byrom couldn’t keep his effort down from the edge of the box after Seddon drove into the area before off-loading. It was turning into a half of frustration for the boys in blue.

With time dwindling down, the opportunity for Exeter to hit on the counter-attack was always present as Stevenage chased the game and Dieng was found in fine form after Martin sprung the offside trap before finding Stockley at point-blank range.

Revell could have levelled things up with 10 minutes remaining after beating his defender to a poorly hit back-pass, the striker just forced a little too wide before blasting over the bar.

Events appeared to be all but confirmed soon after as James-Wildin picked up his second yellow card of the game after preventing an Exeter attack from developing with a cynical pull-back.

It wasn’t for the lack of trying, but a couple of moments made all the difference as Stevenage’s unbeaten run came to an end.

Stevenage supporters wishing to travel down to Exeter for our midweek clash against the Grecians must order their tickets direct from St James' Park to buy at advance prices.

The clash kicks off at 7:45pm on Tuesday 2nd October 2018 and tickets are slightly cheaper if bought before the day.

The Supporters Association Coach leaves the Lamex Stadium at 2pm and costs £25 for both SA members and non-members.

Can't face the journey? Don't worry, we don't blame you. Get behind the boys from wherever you are with an iFollow Match Pass, available for just £10.