Defeat at Exeter on Tuesday night brought the end to an unforgiven two game road trip that saw the team travel the length and breadth of the country inside only three days.

Three points at Carlisle last Saturday helped make up for the defeat though as Stevenage return home looking for a fourth home win out of six games.

The U's are still unbeaten away from home this season with four draws and one win on their travels.

With Colchester just one point and three places above Boro in fourth position, it's another big game with plenty on the line.

"Colchester are a good team. They impressed me last season, it is their Mangers third season in charge now and I think they expect to get promoted. They had good players already, they recruited well in the summer and they are one of the best teams in the league.

“It will be a tough test for us but it is one we are looking forward to."

🎙️ "We want to see them back at the Lamex, backing the team"

The U's have proven to be formiddable opponents over the years with their only defeat coming in our very first meeting, a 6-1 hammering on Boxing Day in 2011 at the Colchester Community Stadium.

Dino Maamria made his Managerial bow at the football club last season against Colchester where a first half Mickael Mandron strike made it a debut to forget. 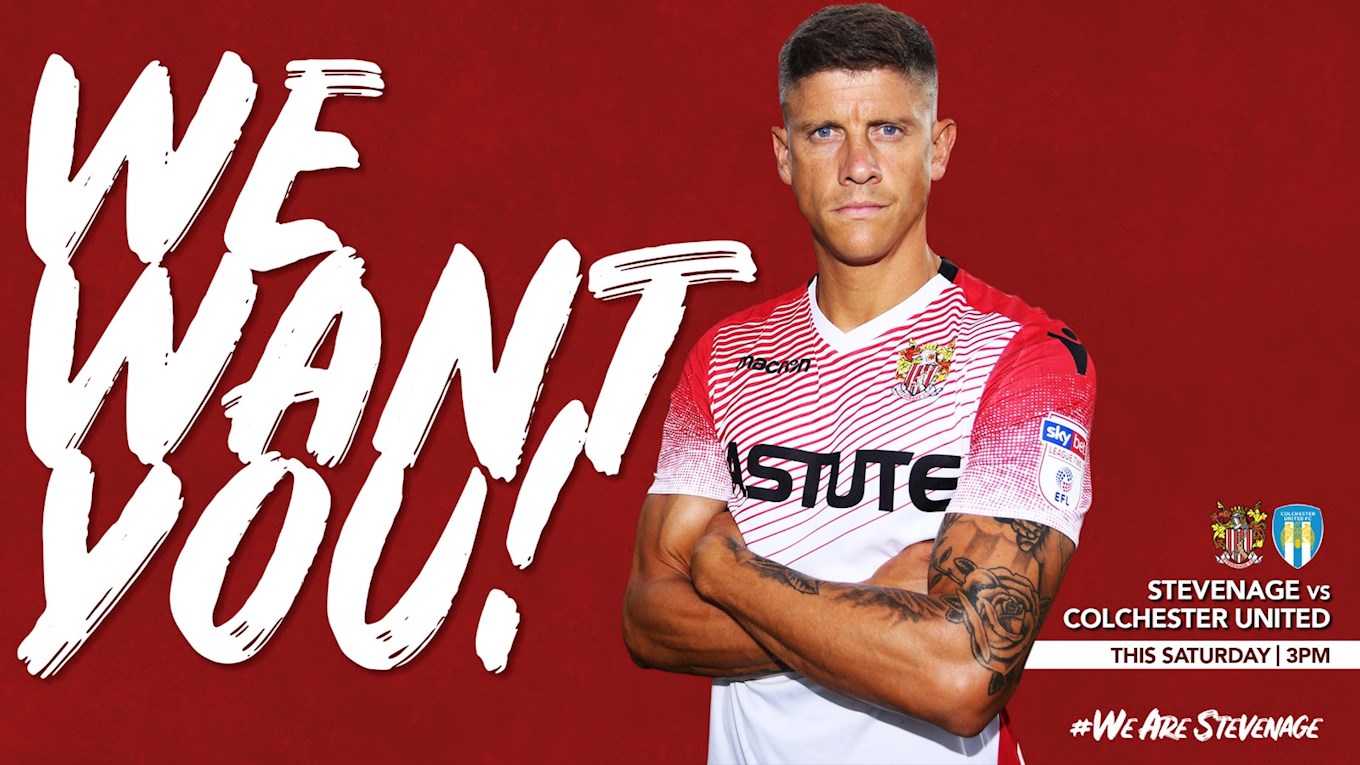 Residents Day brought about an absolute blockbuster on Saturday afternoon as Stevenage came back from an early one goal deficit to triumph 3-1 against Colchester.

The earliest of setbacks threatened to derail the side’s strong start to the season but Guthrie hit just before half-time and as the team grew stronger and stronger, a wild second half saw Kennedy and Sonupe make sure of the win.

Stevenage move up fifth with the result ahead of the trip to third place Newport County next weekend.

On a rain-soaked day at the Lamex Stadium it took only two minutes for the U’s to get in-front. Sammy Smzodics alive to the danger at the far-post, tapping in to give Stevenage an early molehill to climb.

It could have been two before 5 minutes was up but for a heroic goal-line block from Scott Cuthbert to stop Smzodics at the second time of asking. It was an uncharacteristic start from Stevenage, especially defensively considering the strong against record going into the contest. Stevenage born Luke Norris fired over from the edge of the box by the 10 minute mark as Boro were struggling to find any rhythm in the game.

With a one goal lead, Colchester appeared content with their lot as Stevenage would go onto have the better of the half, dominating possession and slowly looking more and more likely like finding a route back into the game.

It seemed to be written in the stars. After being booed with every touch by his former supporters, Kurtis Guthrie popped up in the right place at the right time on the stroke of half-time to draw Stevenage level.

After replacing Ball at the start of the half, Sonupe almost made an immediate impact with an outrageous piece of skill that had the crowd. The winger drawing a fine save from Barnes with an overhead kick that was destined for the top corner.

The second half started in almost direct contrast to the first. Stevenage on top and looking dangerous every time they went forward. Terence Vancooten rattled the post on 55 minutes before Sonupe blazed over from the ricochet. Colchester on the other hand looked ponderous and ineffective when going forward themselves.

Norris stung the palms of Dieng as we approached the hour mark with a well hit strike from distance after Vincent-Young took three Stevenage players out of the game with brilliant feet, skill and strength in the middle of the park.

If the first half was a bit of a dud, the second half was a certified barnstormer. It featured everything – pace, skill, penalty appeals, crunching challenges and even theatre as Guthrie and the travelling U’s went back and forth at every available opportunity.

Alex Revell was replaced by Danny Newton on 65 minutes after the striker was forced off with a nasty looking hand injury that saw him take in Oxygen on his way to the tunnel.

There was only really one team threatening a winner and it was the home side piling on the pressure. Newton came inches away from finding the net after Guthrie headed Nugent’s ball perfectly into the strikers path - Barnes in goal doing enough to force it wide.

With just over ten minutes to go, Ben Kennedy was given the perfect chance to make it 2-1 when the referee pointed to the spot after Seddon was tripped on the edge of the box. The Northern Irishman made no mistake from 12 yards, blasting the ball into the roof of the net.

A minute later, the Lamex Stadium was in absolute raptures as Sonupe finished things off with a cool finish following a quick break, led by Guthrie. Comeback complete and truly deserved as Stevenage fought their way back into the game, refusing to be beat. At the conclusion of the game wild scenes could be seen around the ground as Boro moved up to 5th in the table.

Two tickets for a tenner...

Over the past two weeks, 44,000 residents of Stevenage have received a letter from Dino Maamria with an offer of two home tickets for just £10.

The letter aims to educate residents about the importance and value of their local football club, whilst providing them with an opportunity to experience a matchday for just £5 per person.

To redeem your Residents Letter for Saturday's game, all you have to do is visit the Club Shop between 10am - 7pm on Thursday or Friday, or visit the Ticket Office between midday - 3pm on Saturday.

Bring the letter as well as proof of address for two tickets in any home stand, for any age, for just £10. You will also receive this handy Matchday Guide including three vouchers, to help welcome you to the Lamex Stadium. 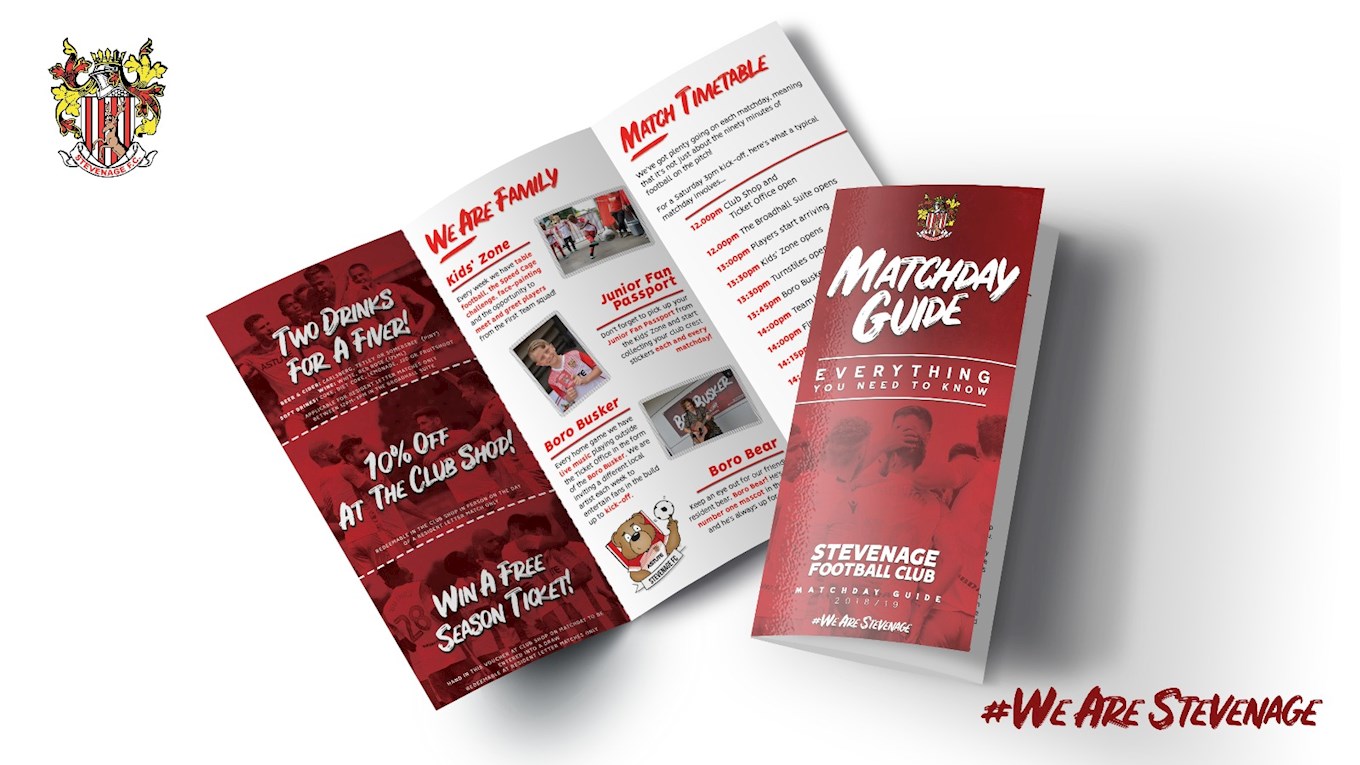 Don’t worry if you can’t make the game on Saturday, there are still seven games left to make the most of the offer:

Didn't receive a letter? No problem – this season we have slashed our ticket prices, meaning you can still watch the Super Boro for a reduced cost.

Purchase your tickets from either borotickets.co.uk, over the phone on 01438 223223 or by visiting the club shop and get behind the Boro this Saturday. 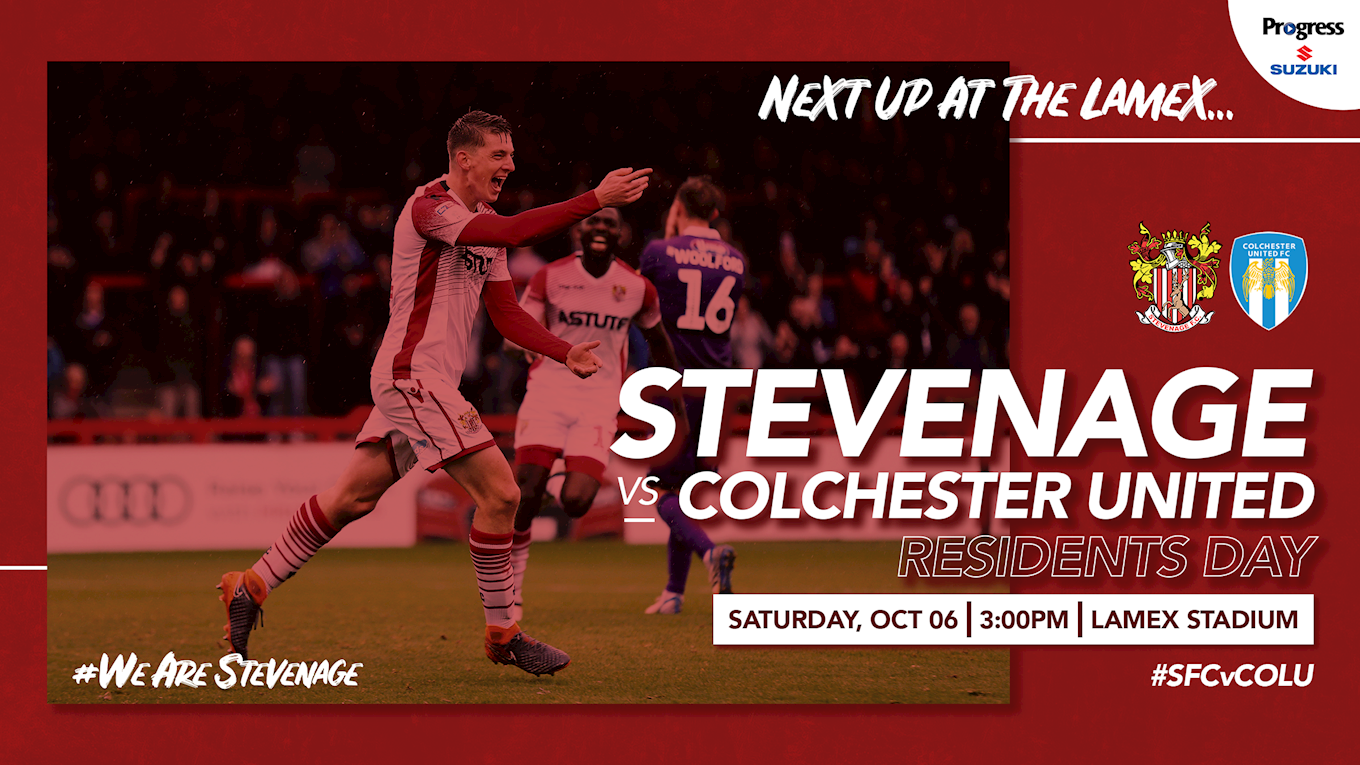 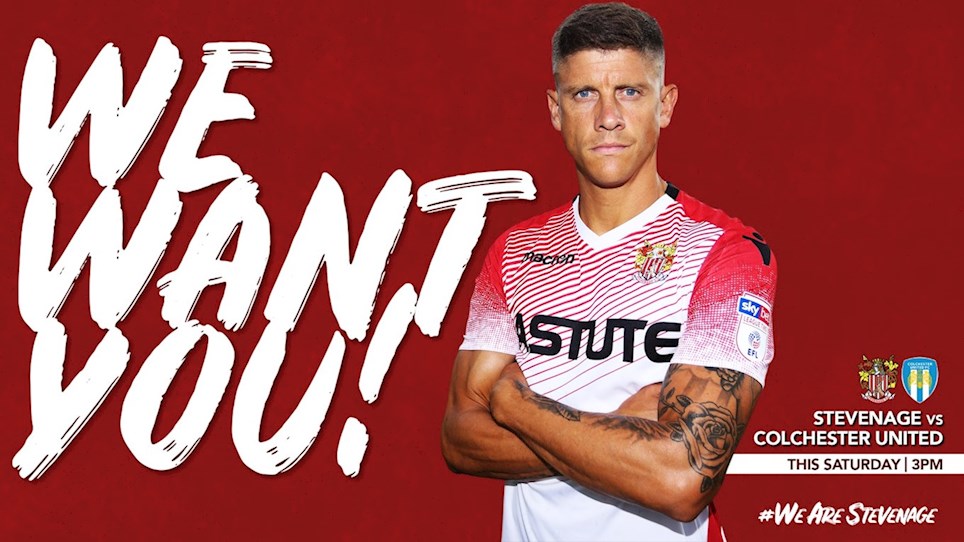 Join us at home for Residents Day this Saturday


Stevenage FC return to the Lamex Stadium on Saturday 6th October 2018 for the visit of Colchester United... 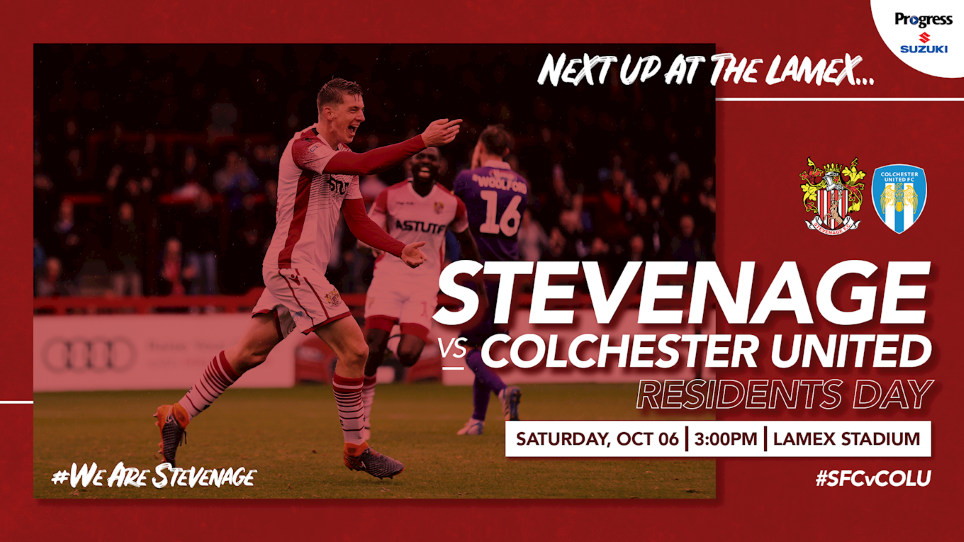 
Stevenage FC return to the Lamex Stadium on Saturday 6th October 2018 for the visit of Colchester United...