Get set for tomorrow's home clash...

After falling to an agonising late defeat at Newport last time out, Dino Maamria and his ambitous squad are eager to hit back and gain maximum points now from a two game home stand, as Crewe Alexandra and Port Vale visit the Lamex Stadium within the space of just three days.

Stevenage find themselves sat just inside the play-off spots with a packed bunch waiting behind, ready to capitalise on any possible slip-up on the horizon. 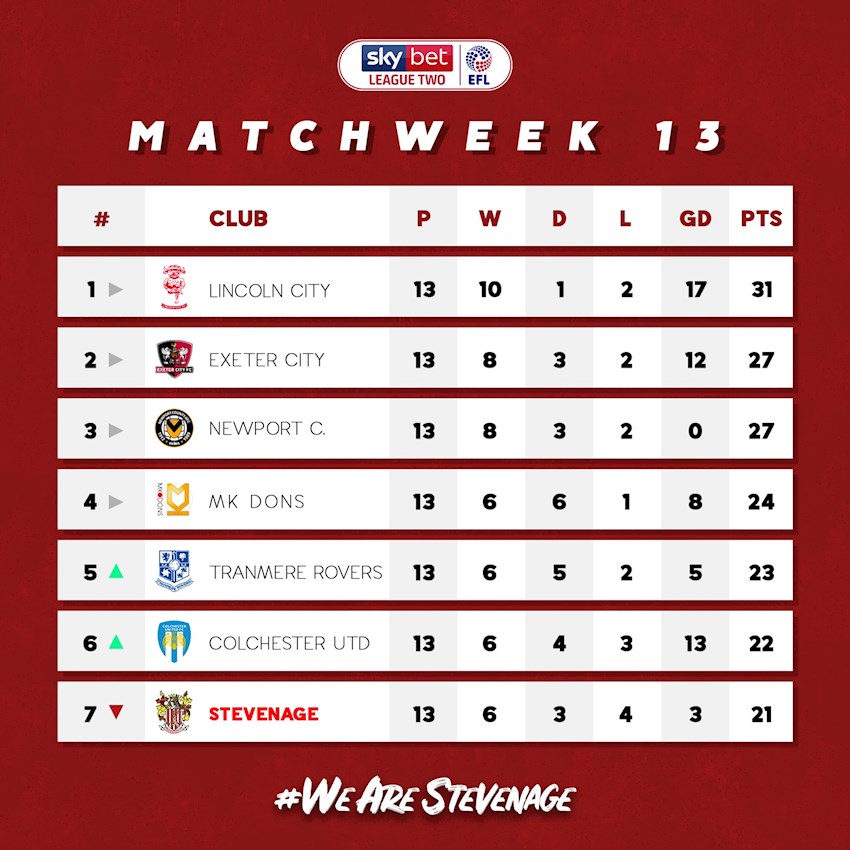 Crewe have had a below-par start to the season with just 12 points from 13 games. The Railwaymen have found life particularly difficult on the road, the club still searching for a first away win with just one draw and five defeats recorded on their travels.

The clubs away record is only worsened by their goal difference - just one goal scored and eleven goals conceded away from Gresty Road see them bottom of the away table in Sky Bet League Two.

That will be of little concern to the Stevenage squad though as they know that on their day, Crewe are a match for any team in the division. 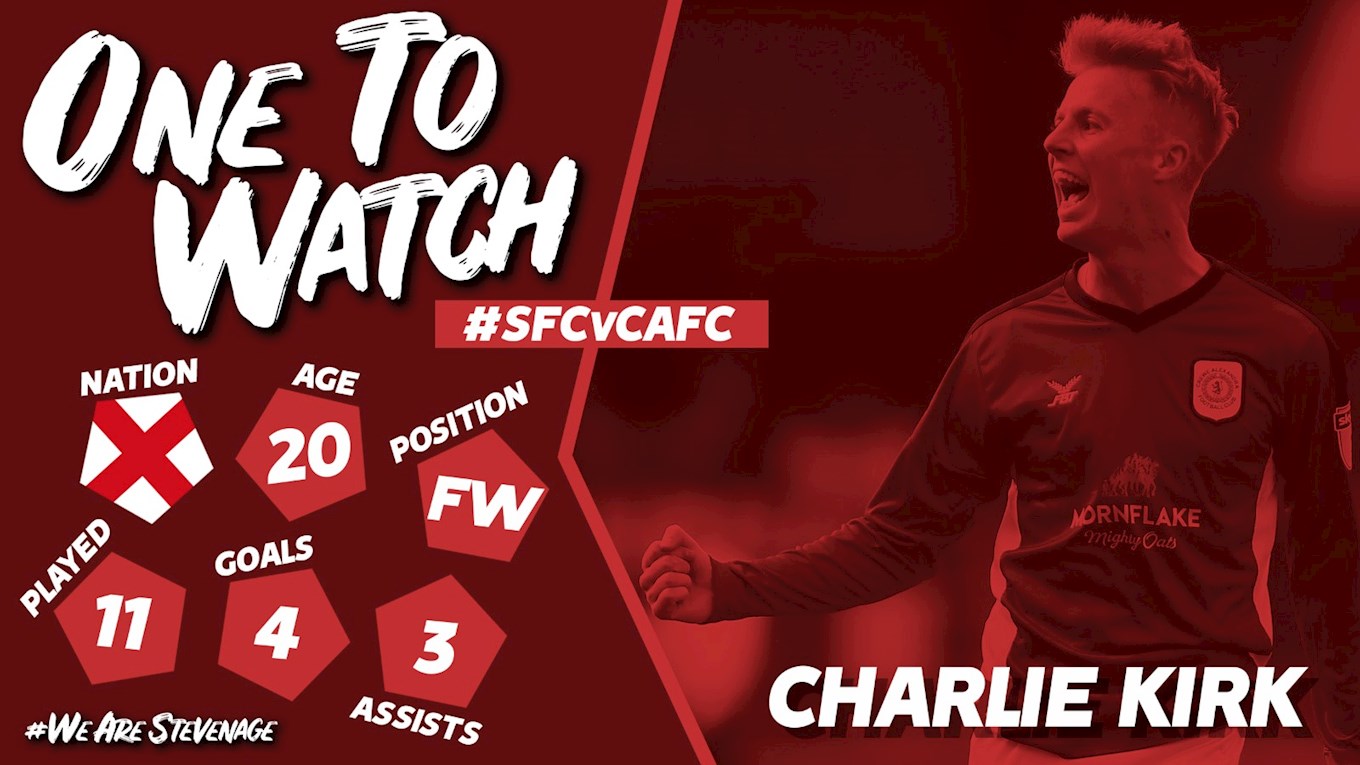 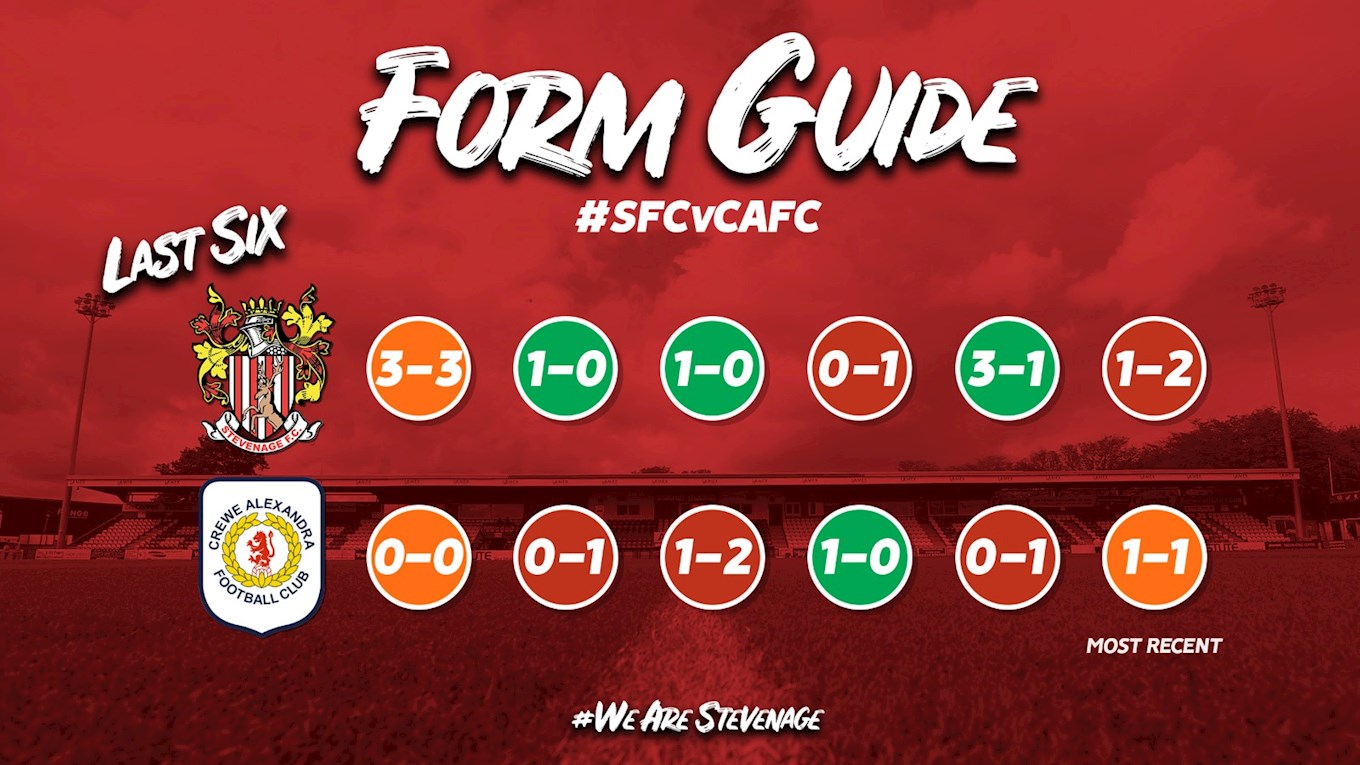 “We have looked after the players this week and we have done a fair bit of talking as well to end out mindset right and what we have to do is keep moving forward.

“We just need to be ready; we have been good at home, the fans have been brilliant in backing us and they have played a big part towards us averaging over 2 points per game at home. We would like to make that better and that starts from Saturday." 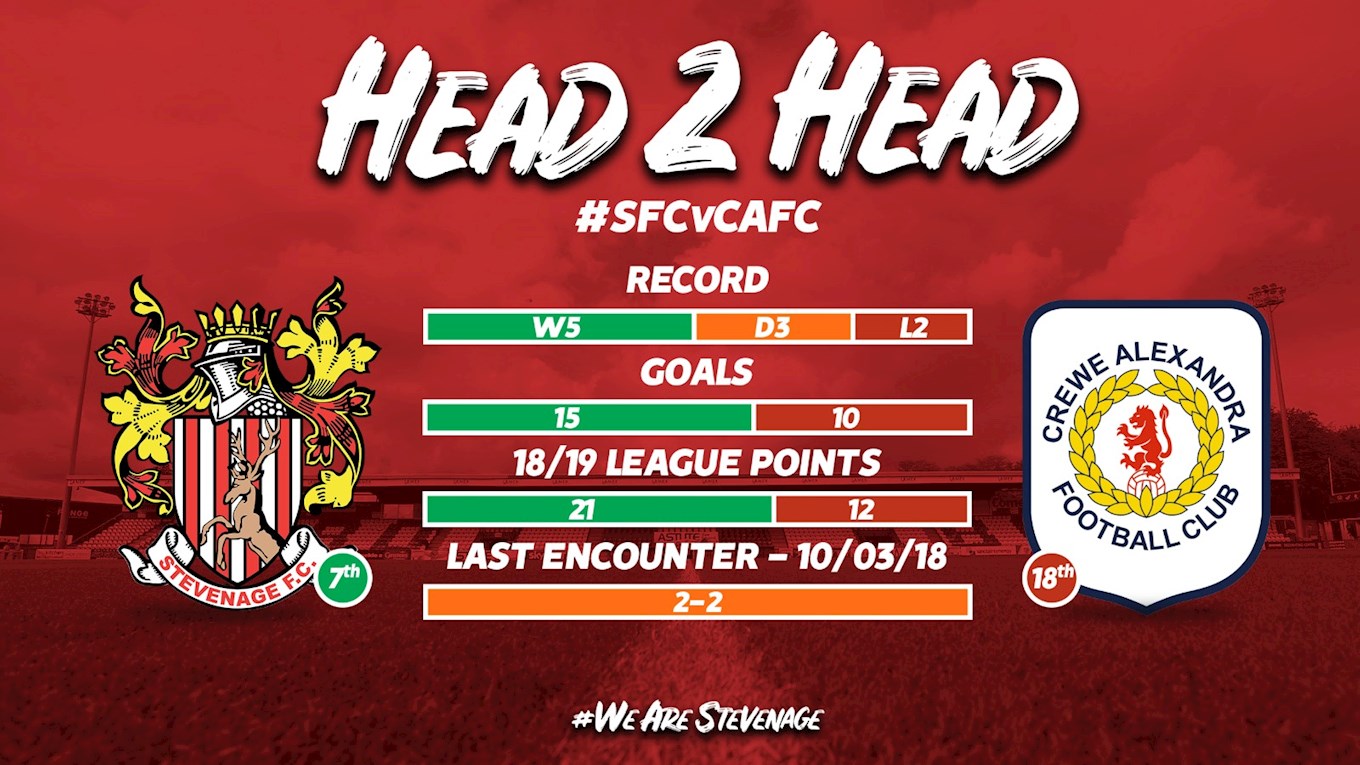 Ten men Stevenage fell to defeat against Crewe on Saturday in a game full of frustration for Maamria’s men.

Ben Nugent’s red card in the 12th minute meant for a challenging afternoon, but the team rose to the occasion as they created a whole host of opportunities throughout the game and would have been wondering how they didn’t at least leave with a share of the spoils.

Unfortunately a second half strike from Bowery was the only time the ball hit the back of the net during an incident filled game at the Lamex Stadium.

The Manager made just one change from the starting XI that narrowly lost out to Newport the previous Saturday, with Kurtis Guthrie coming back in to replace Danny Newton who suffered a knock during training in the build up to the game.

Stevenage got off to a hot start, looking to continue their strong home form against a side in Crewe that were yet to win on their travels this season.

An early chance for Campbell-Ryce was pushed around the post by Garratt in goal and it looked like Boro were on their way to another positive home outing.

That was until the 12th minute when referee Craig Hicks sent off Ben Nugent with a straight red card. A collision between the Stevenage defender and Shaun Miller saw the Crewe attacker go down, but with covering defenders in-toe, the decision to dismiss Nugent had the players, management team and fans united in dismay.

To no surprise, that made life more difficult for Boro. A quick substitution followed as natural left-back, Hunt came on for the unlucky Campbell-Ryce.

Crewe started to get more of a foot-hold in the game, often looking to pepper the box with crosses to take advantage of Stevenage’s new-found lack of height in defence.

Shaun Miller fired a wicked effort over the bar on 24 minutes but that was about as close as the Railwaymen came to finding an opening during normal time of the first half.

At the other end, Revell hit a decent effort wide of the near post and Guthrie came inches away from his second league goal of the season, taking in Wildin’s low cross with a top class first touch, before being foiled by the out-rushing Garratt in goal.

Minutes later, it was the crossbar that denied Guthrie as his header from Kennedy’s cross crashed off the underside much to the agony of all Stevenage supporters inside the ground. It was a superb rally from the team following Nugent’s dismissal.

Right as the half was up, there was almost a sting in the tail. Alex with the ball in the net from a well-delivered corner, but a push on Guthrie from George Ray meant for a disallowed goal on the whistle.

Both sides remained unchanged following the interval and it was Charlie Kirk, Stevenage’s last minute tormentor last time the two sides met, that almost found a way to turn home a speculative volley which flew just wide of the post.

Stevenage had to have their wits about them during the opening exchanges of the second half. Crewe had the forward momentum and if it weren’t for Cuthbert’s block on the line, the away side would have found themselves a goal ahead within five minutes of the restart.

It didn’t take too long before the visitors made it count though, Jordan Bowery with a superb finish with the outside of his foot from just inside the box to make it 0-1, leaving Stevenage with a daunting task.

Guthrie came agonisingly close to an instant reply, heading wide from Byrom’s free-kick from around 6 yards out. Revell was next to come close from a Byrom free-kick, found at the back-post where he was able to take a touch before getting his shot away, which a covering Crewe defender did well to meet.

Every chance was falling to the big man. Since the goal it was almost one way traffic as Stevenage did everything they could to find an equaliser. This time Guthrie couldn’t turn home Kennedy’s low cross across the 6 yard box as once again a Crewe defender was in-place to make the crucial block.

With 20 minutes remaining, Dieng showed of his reflexes as he palmed away Jones’ near-post volley, desperate to keep the game in the balance. With Boro pushing hard, gaps were beginning to appear at the back and Porter could have put the game out of site after taking down Kirk’s cross with his chest, before hitting the post from point-blank range.

Sonupe replaced Kennedy as we approached the closing stages with the game all set-up for a grandstand finish. James-Wildin was next to come close to scoring as he raced onto Guthrie’s knockdown before blazing his effort wide of goal.

In the end, Stevenage couldn’t find the equaliser despite throwing everything at it. A valiant effort from the ten men as Boro return home on Tuesday night for the visit of Port Vale. 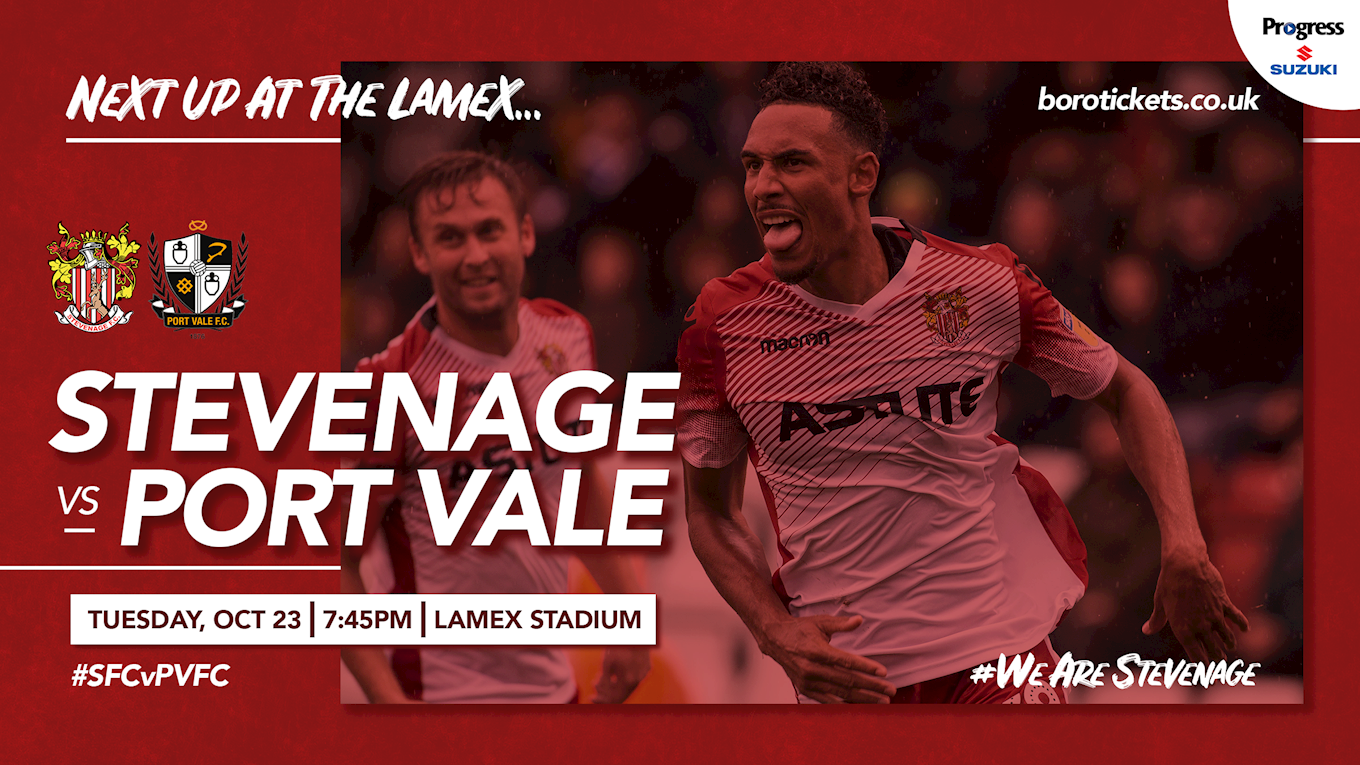 Stevenage are back at the Lamex Stadium on Saturday 20th October for the visit of Crewe Alexandra as Maamria's men look to get back on track following defeat at Newport County.

Boro are well-placed in the league still, 7th going into next Saturday's game and with one of the best home records in division, the Lamex Stadium has been a great home for the team this season.

Standing tickets in the famous East Terrace cost just £15 for Adults and Concessions, £10 for U18s and £5 for U12s.

Saturday's game also see's a return for Winners' Hour in the Broadhall Suite as pints of Carlsberg are priced at just £2 before and after the game, with your first two post-match drinks reduced to £1 should Stevenage get the all-important three points!

The Supporters Association Quiz Night is also taking place in the Broadhall Suite after the game, starting at 7pm.

Tickets cost just £3 per person with a maximum of 6 people per team. Secure your place online, from the club shop or from inside the Broadhall Suite on Saturday. 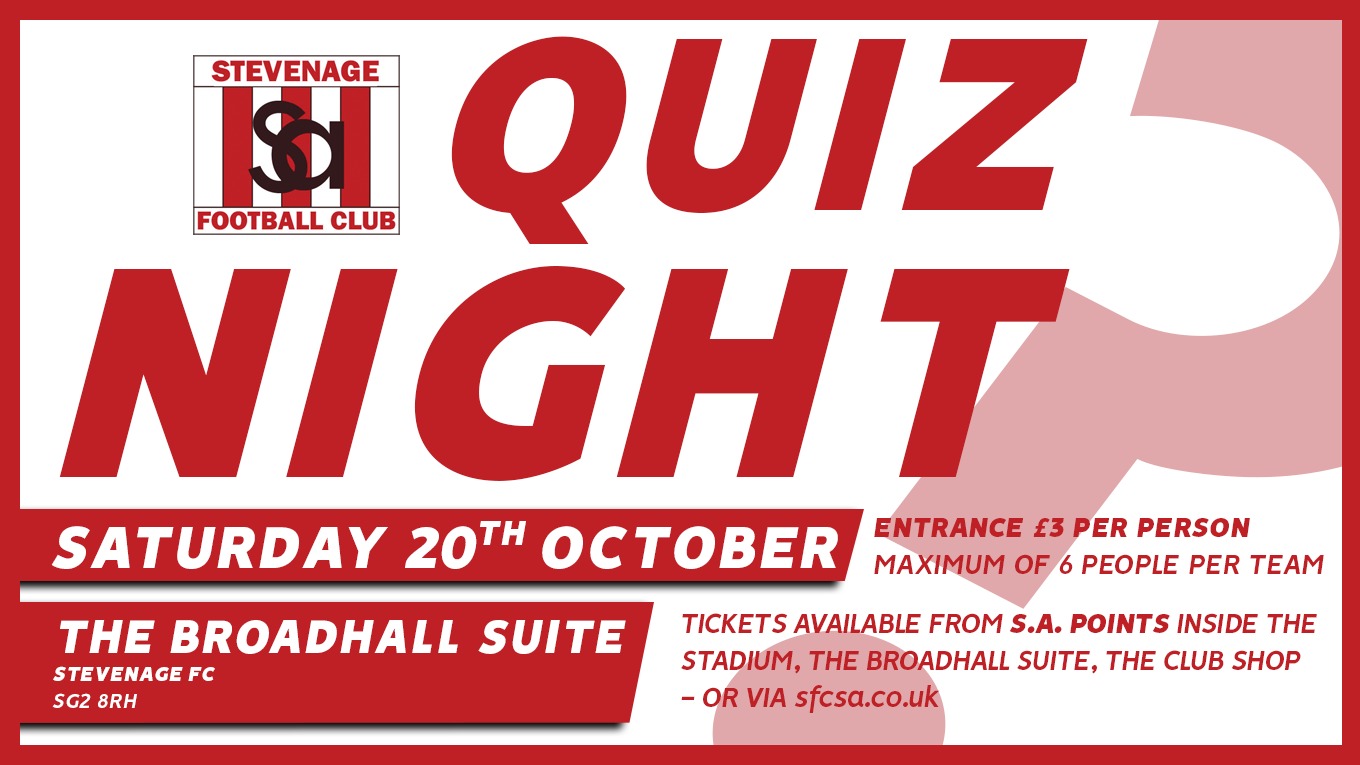