Boro were beaten in the cruelest of circumstances on Tuesday night as despite a superb performance full of attacking endeavor and spirit against Bradford City at The Lamex Stadium, it was the Bantams that came away with all three points...

After a positive first half in which chances were created aplenty, a Tom Soares own goal after 41 minutes gave Stevenage fans that sinking feeling once again.

Despite that, the team rallied brilliantly in the second half to dominate proceedings, exerting pressure on the Bradford defence from each and every angle, yet unable to finish it off in-front of goal.

Dino Maamria named three changes from Saturday's draw at Orient, as Luis Fernandez, Noor Husin and Joel Byrom came in for the injuryed Scott Cuthbert, Terence Vancooten and Charlie Carter. It was a landmark moment for 17 year old Fernandez who after making his first EFL appearance on Saturday, was in from the start for his full league debut.

Even though Stevenage had the better of the possession in the opening 15 minutes of the game, it was Paul Farman that had to deal with the first big chance as James Vaughan’s low shot inside the box was tipped away.

Boro were findind joy down the left-flank as Chris Stokes found Kurtis Guthrie, but his volley was blocked by the Bradford defence. Moments later, the advancing Luther James-Wildin found himself latching onto a Danny Newton cross but his headed effort sailed over the bar.

Down the opposite wing, Guthrie and the Stevenage faithfull looked to have a case for a penalty in the 25th minute, as the Boro striker turned his man inside the box and went down from the challenge, but it was waved away by referee Christopher Kidd.

Just as it looked like both teams would go into the break with the scores level, the unfortunate Tom Soares helped gave Bradford the lead with a miss-placed header that landed in the Boro net.

After a brief spell of pressure from the Bantams to start the half, Stevenage soon got on top and it was Stokes again causing problems down the left-channel as he found Newton in the 62nd minute, who forced an unbelievable save by Richard O'Donnell to claw away his goal-boundheader. Shortly after, Guthrie was picked out by Joel Byrom’s corner, but his header was placed wide.

Chances continued to come and go and with 10 minutes left, Dino Maamria gave 17-year-old Jack Smith his league debut as he replaced the impressive Joel Byrom, who was making his return to the side following injury. As time continued to passs, Kelland Watts almost made it a home debut to remember as the ball came to him inside the box, but his back heeled shot was saved in the 82nd minute, leaving heads in hands all around the grounnd.

Then, just short of the 90th minute mark, Ben Kennedy who came on for his first appearnce of the season looked to square things up in spectacular fashion, only to see his free-kick come crashing off the crossbar and out of play. A tough one to take for Maamria and his men but attention quickly turn to Mansfield away on Saturday.

The Club is pleased to inform all supporters who attended Stevenage FC's opening home match against Exeter City, that they can receive a discount on their prospective 2019/20 Season Ticket purchase, to the value of their Match Ticket...

All supporters who purchased a Match Ticket for Stevenage vs Exeter City on Saturday 10th August 2019 have the opportunity to receive a full refund upon purchasing a 2019/20 Season Ticket, if bought by 7pm on Tuesday 20th August 2019, ahead of Stevenage's second home league match of the season vs Bradford City.

Please note that this offer can only be redeemed in the Club Shop and proof of ticket purchase for Stevenage vs Exeter City on Saturday 10th August 2019 will be required. 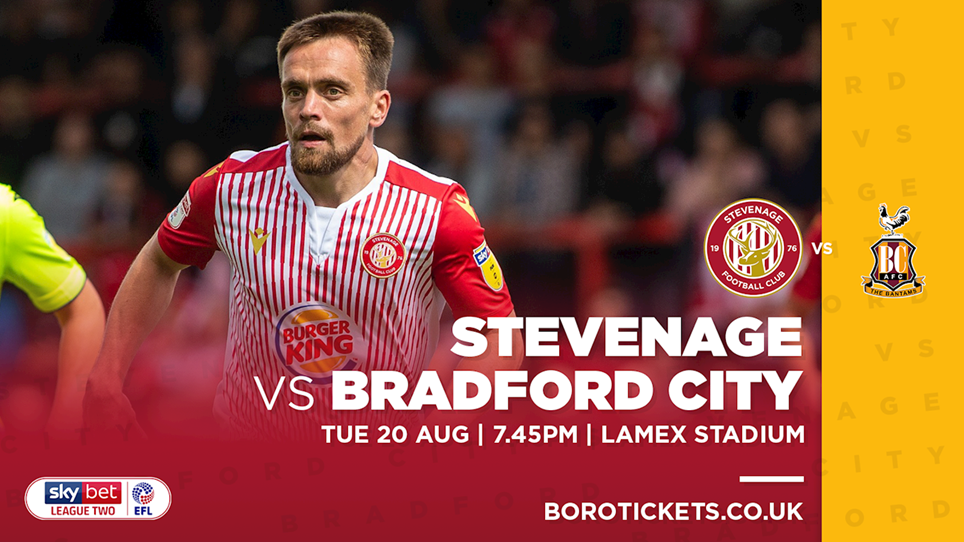 Stevenage back at home to face Bradford on Tuesday


Boro are back at The Lamex Stadium on Tuesday 20th August 2019 for a 7:45pm kick-off against Bradford City...