Stevenage are on the road again to take on Swindon Town on Tuesday 22nd October for a 7:45pm kick-off…

Tickets for Tuesday night’s fixture at The County Ground are available at the following prices:

Boro fans can purchase their tickets from either the Club Shop or borotickets.co.uk, or on the day of the game from the Away Ticket Office with no price increase.

Need a lift? The Stevenage FC Supporters Association coach will be departing The Lamex Stadium at 4pm on the day of the game, so please arrive with time to spare in order to ensure an on-time departure.

After Saturday’s 1-1 draw at Port Vale, Mark Sampson’s side returned to the bottom of the league despite a record of one defeat in their last six games.

With two wins versus Wycombe and Grimsby leading up to the game at Vale Park, Stevenage were left disappointed by not taking all three points back to Hertfordshire.

However, there are some positives for Stevenage. Either Kurtis Guthrie or Jason Cowley have now scored in each of the last five, as the strike partnership builds cohesion and looks a forceful front-line up top.

Terence Vancooten returned after a lengthy spell on the side-lines, replacing Luther James-Wildin on the hour mark. Dean Parrett was also named on the bench, having not featured for Boro in the league since the opening day of the season.

From Swindon Town’s point of view, a home game just four days after an away defeat could be the perfect remedy. Richie Wellens’ side fell to a comprehensive 3-1 setback at table toppers Crewe Alexandra, after leading by a goal to nil at the break.

The Robins have now gone over a month since their last victory, an impressive 1-0 win at play-off dark horses Cambridge United. Pressure may just build on the Swindon boss if they fail to pick up all three points against a team they have never failed to beat at home in the league.

After Saturday’s draw at Port Vale, Interim Boss Mark Sampson acknowledges the importance of Tuesday night’s fixture, and is adamant the team will find a way to take home three points.

“We have got a real big name now on Tuesday night. We need to go to Swindon, be competitive, better than we were today (Saturday), and find a way to win down there.

“We want our performance levels to be better, our mentality better. We need to keep improving.

“We are ready to go to Swindon to find a way to win.”

Swindon Town boast the impressive record of claiming victory every single time Boro have visited the County Ground in the league. Stevenage left victorious on one occasion though, picking up a famous 2-1 win in Wiltshire in the FA Cup Third Round 1998.

After a topsy-turvy 3-2 defeat away to The Robins in November of last year, Stevenage got their payback at The Lamex Stadium in March 2018 with a 2-0 win.

Goals from Alex Revell and a memorable effort from Ilias Chair from his own half claimed all three points as Stevenage continued their rich vein of form going into the back end of last season.

Stevenage are 19/5 underdogs with league sponsors, Sky Bet whilst Stevenage to win and BTTS has been PRICE BOOSTED from 9/1 to 11/1. If you fancy a flutter this weekend, use our designated link which enables the club to receive a slice of your stake!

Stevenage fans unable to make the trip to Swindon on Tuesday night can stream the action LIVE from the comfort of their own home.

All midweek fixtures in 2019/20 are available for domestic streaming with an iFollow Video Match Pass. 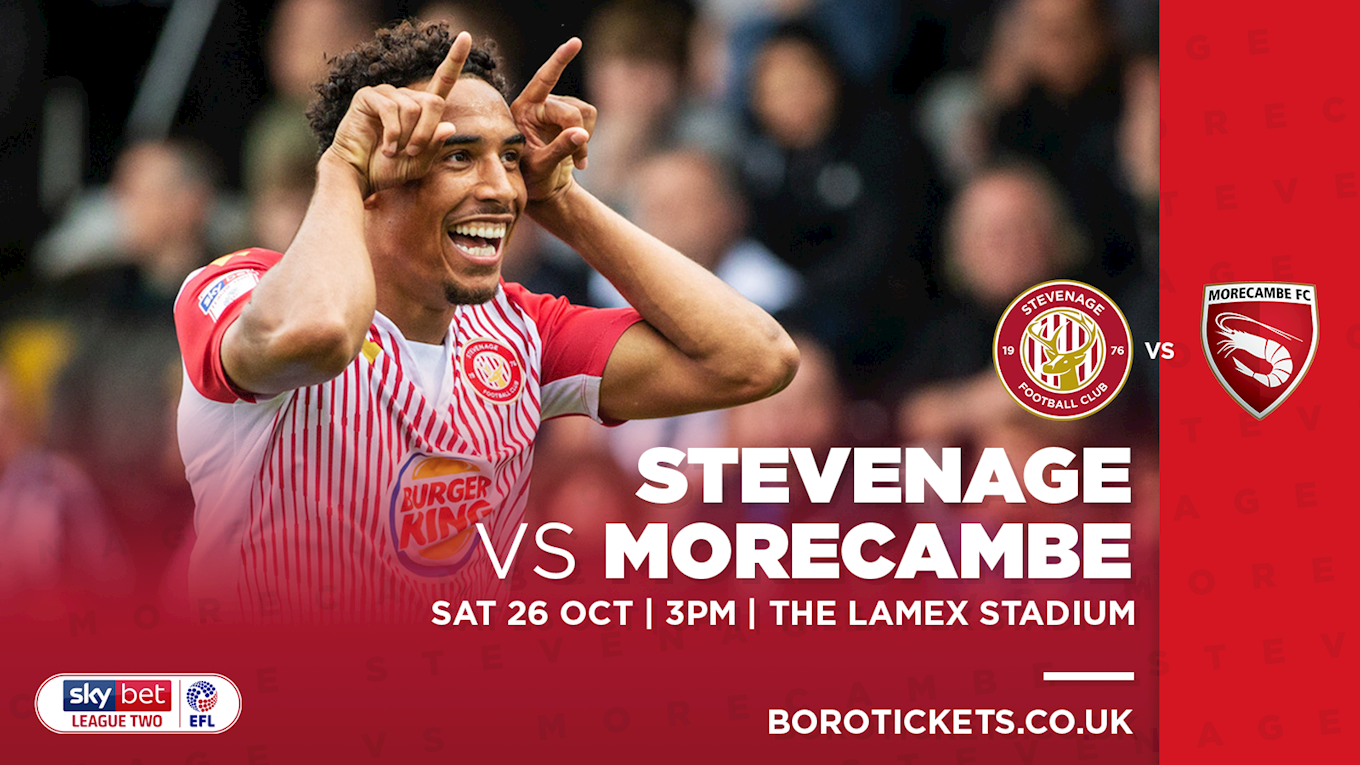 Stevenage fell to a last-gasp defeat at Swindon Town on Tuesday as Sky Bet League Two top goalscorer Eoin Doyle struck in added time to complete a 1-0 scoreline for the home side...

Despite restricting the Robins to very little in-front of goal throughout the match, Boro couldn't hold on as Swindon's main marksman found enough space inside the box on 90 minutes, to get away a quick turn and shot to win the match.

Boro remain bottom of the table, just behind Morecambe, ahead of Saturday’s huge home match with the Shrimps.

Mark Sampson named three changes from the 1-1 draw at Port Vale on Saturday as Terence Vancooten, Joel Byrom and Emmanuel Sonupe came into the side in place of James-Wildin, Michael Timlin and Jason Cowley.

During the early stages of the contest, it was Stevenage with the upper hand as they enjoyed the majority of possession and territory inside the opening 15 minutes. Watts had a penalty shout denied, Sonupe almost found an opening as he tried to take it around the on-rushing goalkeeper before Boro’s number 11 tried his luck from 35 yards out with a dipping strike, that flew just over the crossbar.

The promotion-chasing home side soon found their groove though and began to assert their authority on the match, dominating possession and creating a couple of good opportunities before the half was out.

League Two top scorer Doyle headed right at Farman on 23 minutes when he had the whole goal to aim at, much to the relief of the travelling Boro faithful, before Yates fired over from close range after a flowing move that cut through the Stevenage defence. That was about it though in terms of clear-cut chances for the Robins as Sampson’s side played a disciplined half of football, restricting the opposition to very little in-front of goal.

Then, with the minutes dwindling down, Boro had their best opportunity of the half, as Cuthbert headed narrowly wide with a free header from inside the six-yard box, that landed just the wrong side of the near-post.

It was a tight first half with chances coming at a premium but Stevenage could be pleased with their 45 minutes of work.

Swindon had a claim for a penalty turned down early in the second half, as the dangerous Lloyd Isgrove took the attack to Stevenage on a counter-attack with a driving run into the box, before being challenged by Vancooten. It was a sign of things to come from the home side, as minutes later Yates hit a snapshot on the half volley that rocketed a foot away from smashing into the net.

With 60 minutes on the clock, Swindon had another claim for a penalty, this time via handball as a fizzing cross smashed into the arm of Nugent. With his hand by his side and no chance to move it out of the way, the referee waved away all protests.

Dean Parrett made his return to the side a couple of minutes later as he replaced Emmanuel Sonupe and Michael Timlin came on for Charlie Carter as Stevenage attempted to shore up the midfield with the home side on top of the game.

Parrett made an immediate impact and struck a decent effort at goal with 23 minutes remaining, from a narrow angle that Benda did well to get behind. Two minutes later, he had clearest opportunity yet, as the ball broke to him inside the box to go one-on-one with the goalkeeper, but his dinked effort fell wide of the goal.

As time wore on, the match began to open up and it looked like there could well be a winner as Mackail-Smith came on for Vancooten on 84 minutes, who was struggling with cramp. Farman performed wonders to pull off a triple save as the clock approached 90 minutes, and then, as added time was shown, Doyle struck a brilliant finish from 12 yards out on the swivel, to send the home fans into raptures and the away fans into despair.

Next up for Stevenage is a midweek trip to Swindon Town on Tuesday 22nd October 2019 are on sale now...

For the second straight season, Boro travel to The County Ground on a Tuesday Night and tickets are available now at the following prices:

Purchase your tickets in-advance from the Club Shop or borotickets.co.uk before 4pm on Monday 21st October 2019. Tickets will also be available from the Away Ticket Office on the day of the game with no price increase.

Need a lift? The Stevenage FC Supporters Association coach will be departing The Lamex Stadium at 4pm on the day of the game, so please ensure to arrive with time to spare in order to confirm an on-time departure. 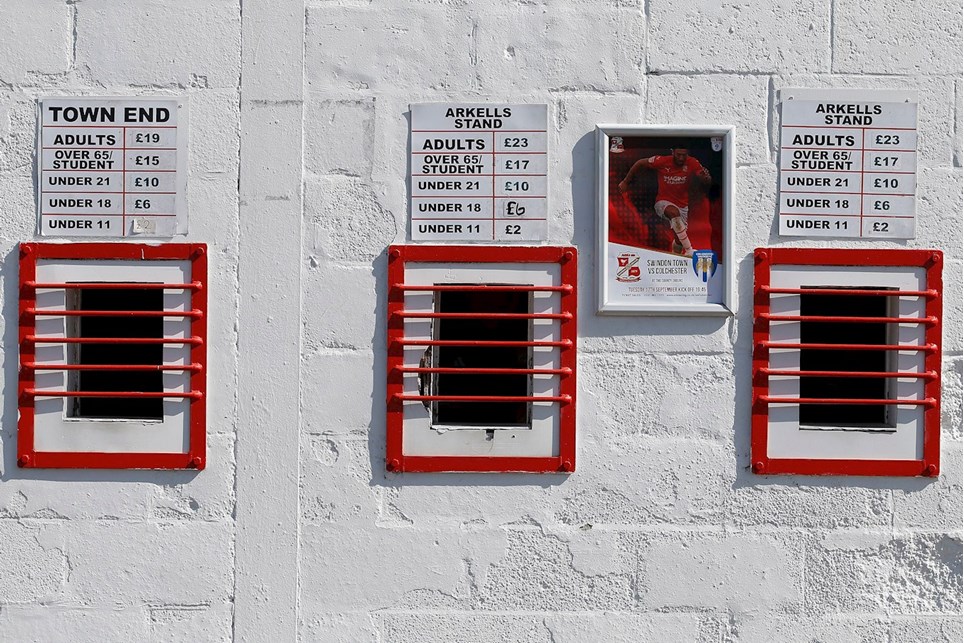