Despite going ahead through Elliott List in the first half, Lee Novak equalised for the Bantams early in the second before grabbing his second with just ten minutes to go.

With a number of players out due to injury/illness, Academy players Mackye Townsend-West, Yasin Arai and Max Granville were all named on a Sky Bet League Two bench for the first time in their careers.

Stevenage’s first chance of the game came through the head of Luke Prosser, as Read’s found the on-rushing centre-back, but his effort sailed over the bar.

Jack Smith was next to have a sight at goal, after Osborne cut-inside from the left to find the midfielder at the back-post, but his header lacked conviction as it fell wide of the goal.

The first half of the first half was full of nearly-moments for Stevenage, who often got into good positions but the final touch, pass or drop of the ball wasn’t falling for a red and white shirt.

One such moment came on the half hour mark, when Newton did brilliantly to work his way into the danger area but after passing it short to Osborne, the midfield man checked inside one time too many and the chance went missing.

A penalty appeal was turned down a few minutes later, as Smith released List on the counter-attack, and after carrying the ball into the box, a challenge came in from a recovering defender but the referee deemed the play fair.

As the half wore on, Boro’s attacking threat continued to grow momentum. A clever free-kick routine resulted in Newton receiving the ball to feet and after driving down towards the line, he whipped an enticing ball across the goal but Dinanga was none of his teammates gambled to turn it home.

Stevenage finally got their just rewards for a superb first half, when Dinanga raced down to the by-line before crossing into the box, where List was able to take the ball down before smashing it into the roof of the net.

With just a few moments until the break, Prosser denied Novak with a superb block, after the striker wrong-footed Cuthbert to open up a golden opportunity to score but his defensive partner bailed him out with a last-ditch challenge to keep Boro ahead at the interval.

Stevenage kept on the front foot to start the second half, enjoying the majority of the ball and the goalmouth action, but similar to the beginning of the first half, the final ball either failed to find a teammate or Bradford were able to snuff out the opening.

Then, on 60 minutes, Bradford struck back through their primary threat, Lee Novak who glanced Tyler French’s cross goalwards to make it 1-1. At this stage in the match it was the home side in the ascendency as Stevenage looked to regain their grip of the game.

Ross Marshall replaced Read on 70 minutes to attempt to shore up the midfield but within a matter of moments, received a whack to the head which resulted in a lengthy delay as he received treatment.

With 10 minutes to go, Luke Prosser had another chance with his head as he connected with Osborne’s corner, but despite getting this one on target, it was straight at Bradford Captain O’Donnell.

Two minutes later, Novak grabbed his second as he calmly finished from inside the box following a clever cut-back to the striker.

Femi Akinwande was Revell’s final change of the game and Stevenage had chances to equalise, as an Osborne corner flew across the six yards box before being cleared out to James-Wildin, who struck the ball sweetly from distance to force a save out of O’Donnell.

With just seconds remaining, Dinanga came inches away from two goals in two games, as his shot on the turn deflected off a defender and flew just wide of the far-post.

With so much disruption in the build-up to the match, it was always going to be a challenging game for Boro and so it proved. Although Stevenage performed well for large periods of the game, it was Bradford who ran out winners for the first time this season. 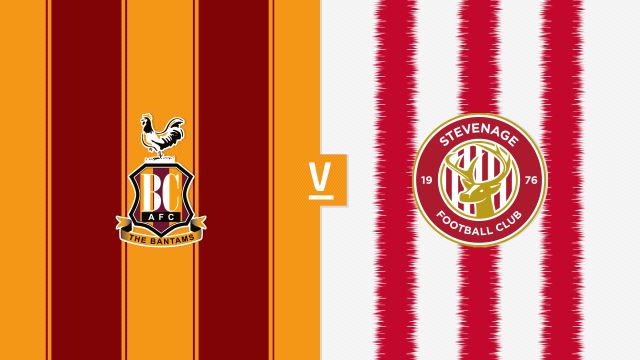 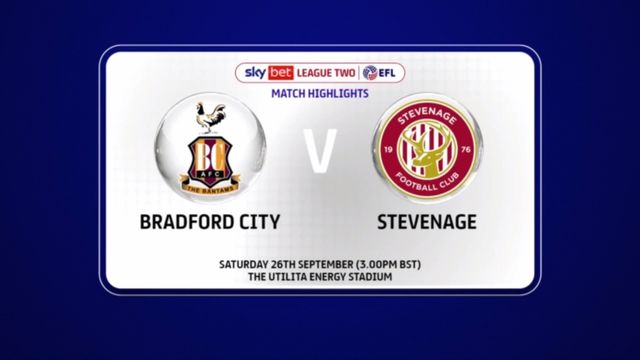 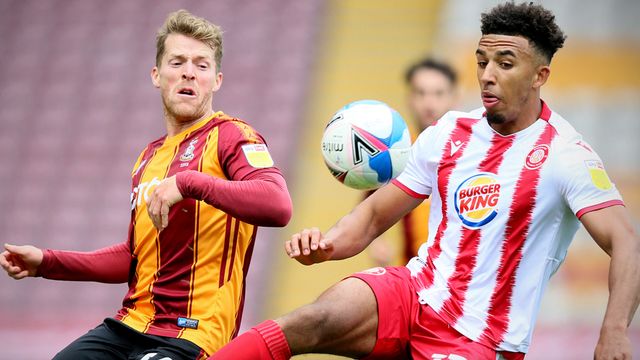