Team news for today's FA Cup Second Round fixture at Yeovil Town can now be confirmed...

Watch today's game LIVE on BBC Two & iPlayer, listen live on iFollow or follow Boro from around the world with the FA Cup's global broadcasters. 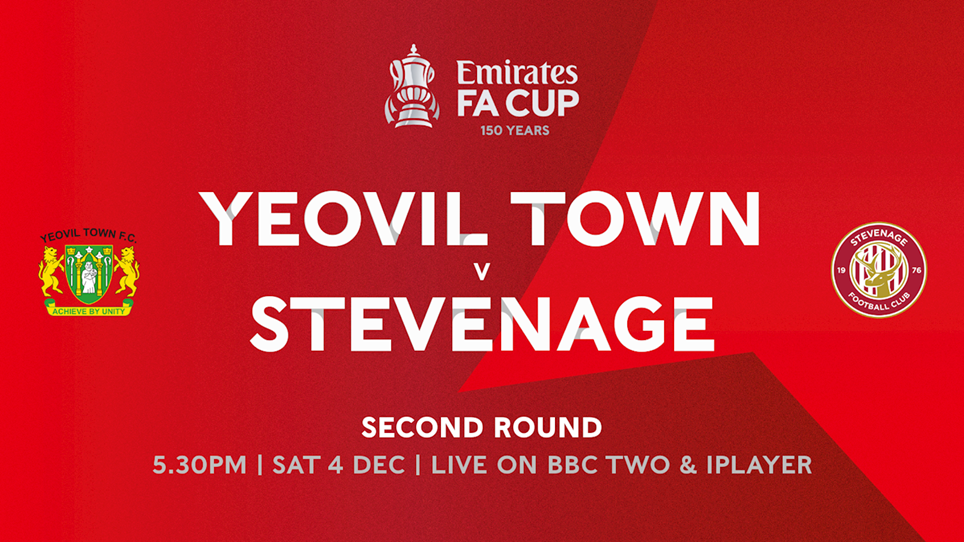 After Robbie O’Keefe led his side to a 2-1 win against MK Dons in the first-round replay, Paul Tisdale took the team for the second-round fixture after being appointed Manager last weekend. His side consisted of eight changes from Tuesday’s penalty shoot-out defeat to Sutton in the Papa John’s Trophy with BBC Cameras keeping a close eye on this FA Cup tie.

Stevenage fans were heard loud and clear before the whistle had even been blown, with free coach travel being offered to supporters ahead of this clash. It was Yeovil to kick off and Yeovil to get the first chance of the game as, within seconds, former Boro midfielder Dale Gorman fired wide of the post from just outside the area.

After ten minutes, the game seemed to be going Yeovil’s way entirely as Stevenage struggled for possession. Jake Reeves soon found his name in the referee’s book after preventing a Yeovil counterattack on the half-way line.

Stevenage earned themselves a free kick just outside the area three minutes later, with Jake Reeves standing over the ball. Reeves’ effort hit the target but was well kept out by Grant Smith in goal.

Boro came close to breaking the deadlock again just minutes later as Jake Reeves pulled off a superb ball over to the right, reaching Luther James-Wildin. The full-back sent the ball into the area with Elliot Osborne getting on the end of it and being denied.

The tie was end to end by the half-hour mark with neither side able to cause too much trouble. Bruno Andrade picked up the ball in the Yeovil area before going on a blistering run, being fouled in the process. The resulting free kick was whipped in by Max Melbourne as the ball fell to Luke Prosser who fired over on the half-volley.

Five minutes later, it was Yeovil’s turn to create a chance as Josh Staunton’s first-time effort went narrowly past the post, briefly worrying the Stevenage fans.

Just before half-time, the majority of the ball was in Yeovil’s half as Boro looked desperate for the first goal. Tisdale’s men won several corners but none of them came to anything before the referee blew his whistle, sending the sides in level at the break.

Seconds after the restart, Stevenage earned themselves a free kick from not too far outside the Yeovil area. The ball was whipped in, but Elliott List’s header caused little trouble with his effort going high over the bar.

Five minutes later, the hosts opened the scoring. A well-timed pass was played into Charlie Wakefield who had little to do but place it calmly past Adam Smith to put the National League side ahead in the tie.

Just before the hour mark, Paul Tisdale elected to go for a three at the back as Luke Prosser left the field, being replaced by striker Luke Norris in an attempt to get the equaliser.

Seven minutes later, Stevenage got their best chance of the game so far without doubt. Elliott List did well to press the Yeovil defence as his block resulted in Jamie Reid being through on goal. However, Grant Smith prevailed in the one on one, denying the striker.

Tisdale made his second and third substitutions of the game as Brad Barry and Arthur Read replaced Elliot Osborne and Jamie Reid. With just under ten minutes remaining, Yeovil looked to double their lead as Matt Worthington’s dangerous ball across the box went through every player and out for a throw-in.

As Stevenage looked for the equaliser, Yeovil were determined to defend or even get a second. They continued to frustrate Boro as the fourth official indicated four minutes of added time.

Unfortunately for Tisdale’s men they failed to break down the Yeovil defence as the referee blew his whistle, ending the game and Stevenage’s FA Cup campaign for the 2021/22 season. All focus now lies on the league, starting with Scunthorpe at The Lamex this Tuesday.

A big thank you to the 326 Stevenage fans who travelled to Somerset to support the team.

Taking place at 5.30pm on Saturday 4th December 2021, Boro were rewarded for their dramatic victory over MK Dons with a journey to Somerset to take on Darren Sarll’s Yeovil Town.

Tickets are available online from www.borotickets.co.uk, the Stevenage FC Club Shop (Thursdays 12pm-7pm & Fridays 10am-5pm) and from the Yeovil Town Ticket Office on the day of the game.

Away supporters will be in blocks N and P of the Screwfix Community stand with prices are as follows:

Online ticket sales for delivery will come off sale at 10am on Tuesday 30th November, but will still be able to collect or purchase from the Stevenage FC Club Shop until Friday 3rd of December at 4pm.

The Club will be providing free coach travel to supporters for this fixture.

Supporters wishing to book their free seat can do so at the time of purchasing a ticket for the Second Round tie from the Club Shop, which is open Thursdays 10am-7pm, Fridays 10am-5pm and Home Matchdays 12pm – Kick-Off.

All coach travel bookings must be placed via the Club Shop in person at the time of purchasing a match ticket.

The coach will be departing The Lamex Stadium at midday on the day of the game, please ensure to arrive with time to spare to confirm a scheduled departure.

In the event of a replay at The Lamex Stadium, Stevenage Football Club can confirm match ticket prices will be as follows:

The replay is scheduled to take place on Tuesday 14th December at 7.45pm, subject to television scheduling.

Further information will be released if a replay is required.