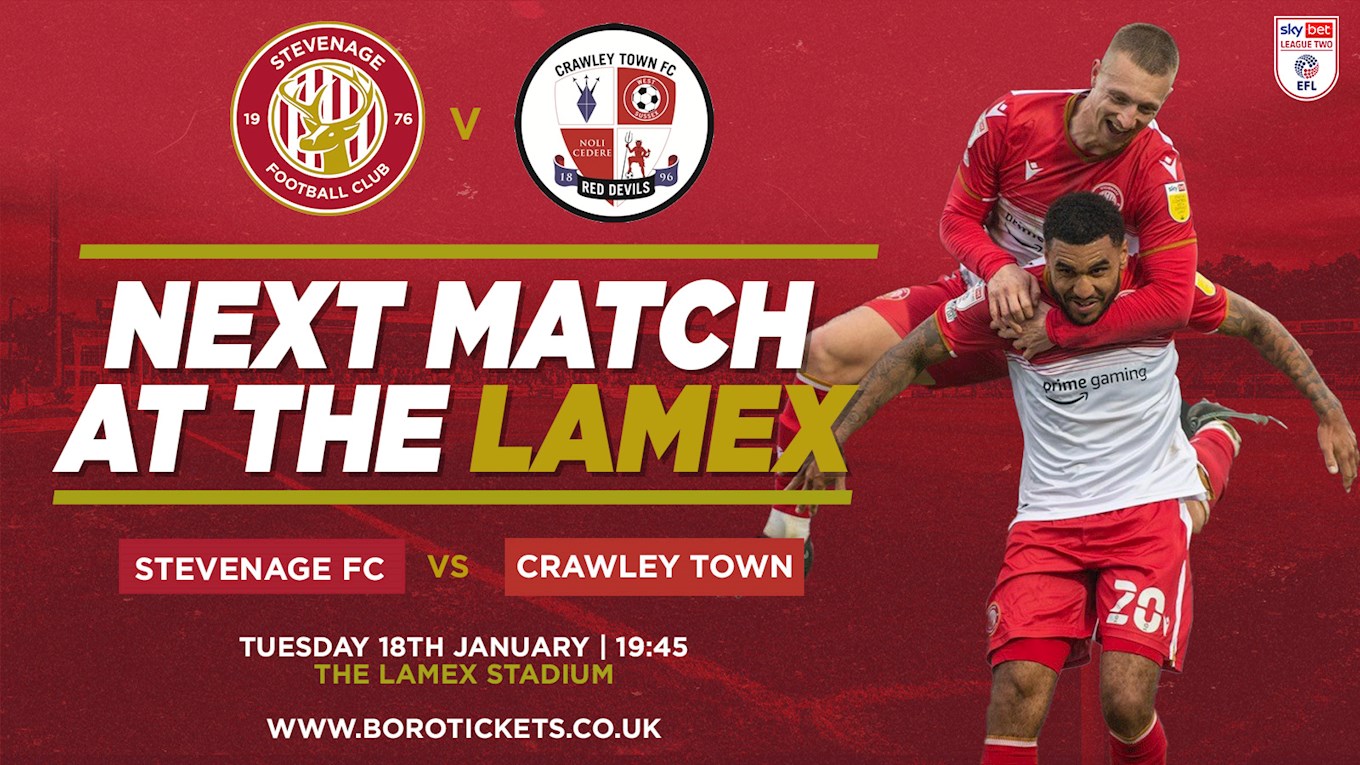 Paul Tisdale’s men looked to go three games unbeaten after a win and a draw against Walsall and Sutton United respectively at The Lamex in the ten days. His side consisted of four changes as Bruno Andrade, Luke O’Neill, Ed Upson and debutant Zain Westbrooke all made the starting XI.

It was Stevenage who got the early chances of the game as Ed Upson released a powerful effort over the bar before minutes later Bruno Andrade forced Glenn Morris to get down and save.

After ten minutes Crawley found more of the ball as they attempted to break the deadlock. Ashley Nadesan picked up the ball after driving forward before playing in Tom Nicholls who fired just wide.

Five minutes later, it was Boro’s turn to get a chance on goal as an inviting cross from a corner fell out the hands of Morris and into the path of Terence Vancooten who blasted over from six yards.

An end-to-end opening twenty-five minutes continued as The Red Devils applied the pressure. Ashley Nadesan powered through but was soon shut down by Scott Cuthbert who produced a last-ditch challenge.

Boro grabbed the first goal of the game just before the half-hour mark. Debutant attacking midfielder Zain Westbrook delivered the perfect cross to Bruno Andrade who flicked it onto Jake Taylor, allowing him to nod home and put the hosts in front.

Tisdale’s side almost doubled their lead just two minutes later as Ed Upson played the ball over to Ben Coker whose headed effort was denied on the line. In addition, there were huge penalty shouts from the Boro faithful in that moment, but nothing was given.

Just before the half-time whistle, Crawley managed to find an equaliser as Tom Nicholls picked up the ball before smashing it into the top right corner past Christy Pym to level the scoring.

The second half began with Crawley on the front foot as, a few minutes into the half, the ball fell to Nick Tsaroulla who fired into the side netting to the relief of Stevenage.

On the hour mark, Tisdale introduced his first substitutions as Luke Norris and Luther James-Wildin replaced Luke Prosser and Luke O’Neill respectively. A couple of minutes later, Jake Taylor fired from just outside the box with his effort flying just inches over the bar.

Boro continued to increase the tempo as they once again came close to taking the lead for a second time. Luke Norris blasted his shot at Glenn Morris from close range, but the keeper did well to deny.

The Boro offence did not stop there as substitute Luke Norris put Stevenage in front for the second time. Jake Taylor crossed it into the striker after beating his man, leaving Norris the simple task of nodding home.

Stevenage had just shy of twenty minutes to hold onto their lead as every man in a Boro shirt looked determined to defend. Terence Vancooten pulled off a perfectly timed block to keep the score in Boro’s favour.

Jake Taylor received a standing ovation with eight minutes to go after his performance as he was replaced by Chris Lines in midfield in an attempt to see the game out.

With just five minutes remaining, Stevenage looked like they could grab a third as Luke Norris, through on goal, attempted to loft the ball over the keeper but Glenn Morris caught well.

The Fourth Official indicated four minutes remaining as Boro held on with everything their arsenal. Christy Pym pounced on the ball in his area to the delight of Stevenage fans as the referee blew his whistle for full time.

A performance to be proud of for everyone at Stevenage as Tisdale’s men continue their promising run of form in their quest to climb the league table. Now a long trip to Hartlepool awaits this Saturday.

A third home game in eleven days is up next for Stevenage with the visit of Crawley Town in Sky Bet League Two...

Kicking off at 7.45pm on Tuesday 18th January 2022, John Yems' Red Devils make the trip to Hertfordshire after the original fixture on Boxing Day was rescheduled. Paul Tisdale's Boro shared the honours with Sutton United on Saturday and will be hoping to go one better with all three points this time out. 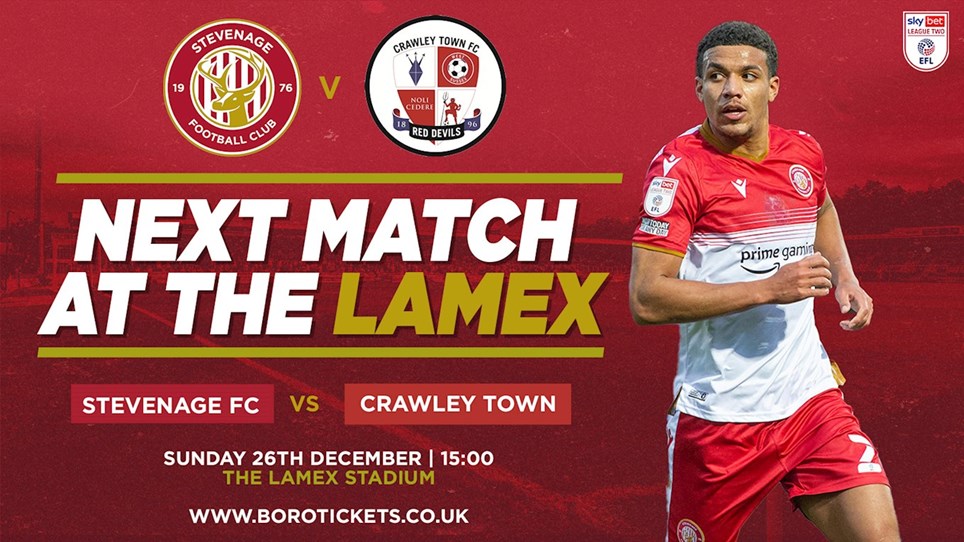 
Match tickets for Boxing Day game at The Lamex Stadium vs Crawley Town are now on sale... 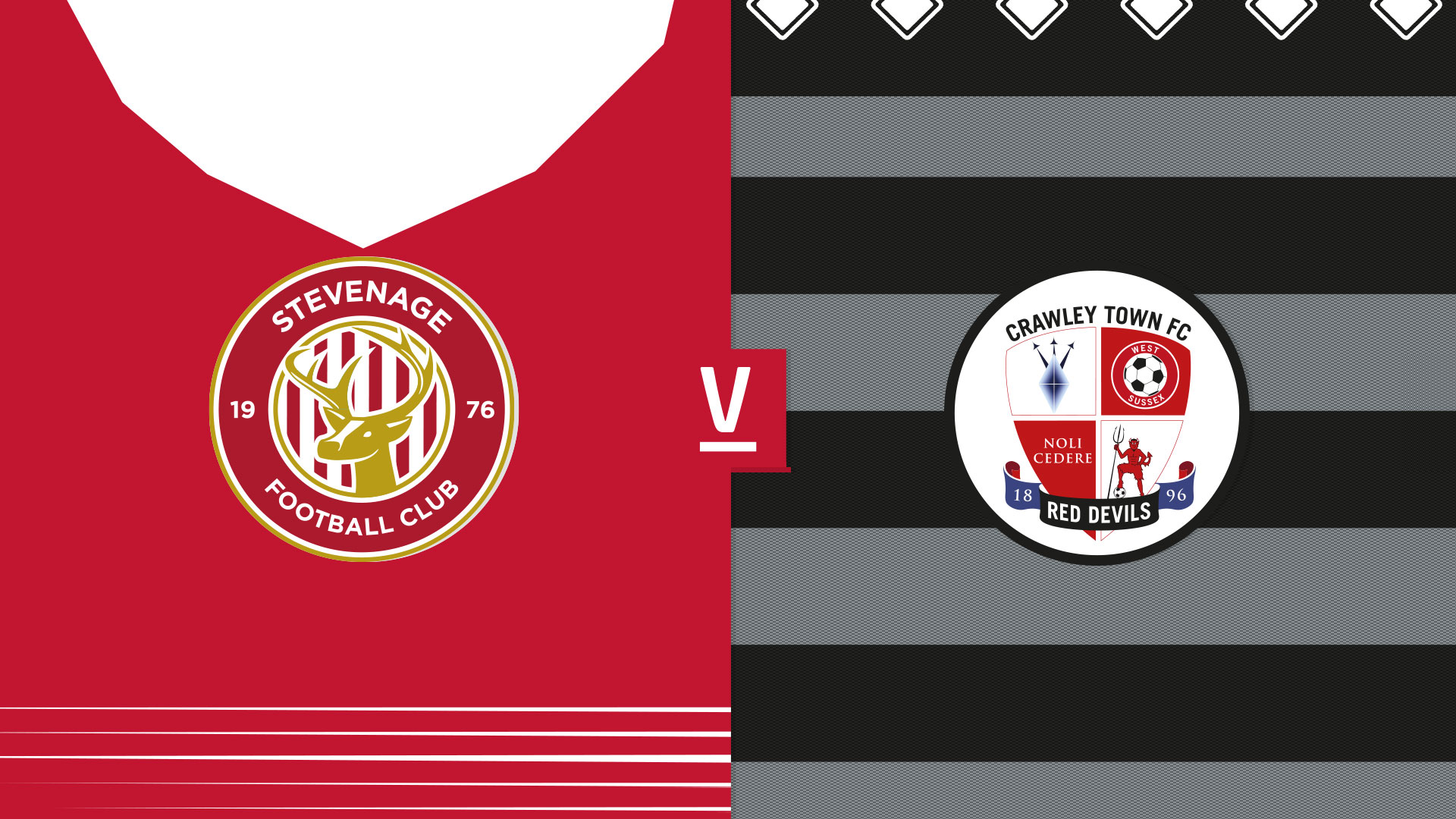 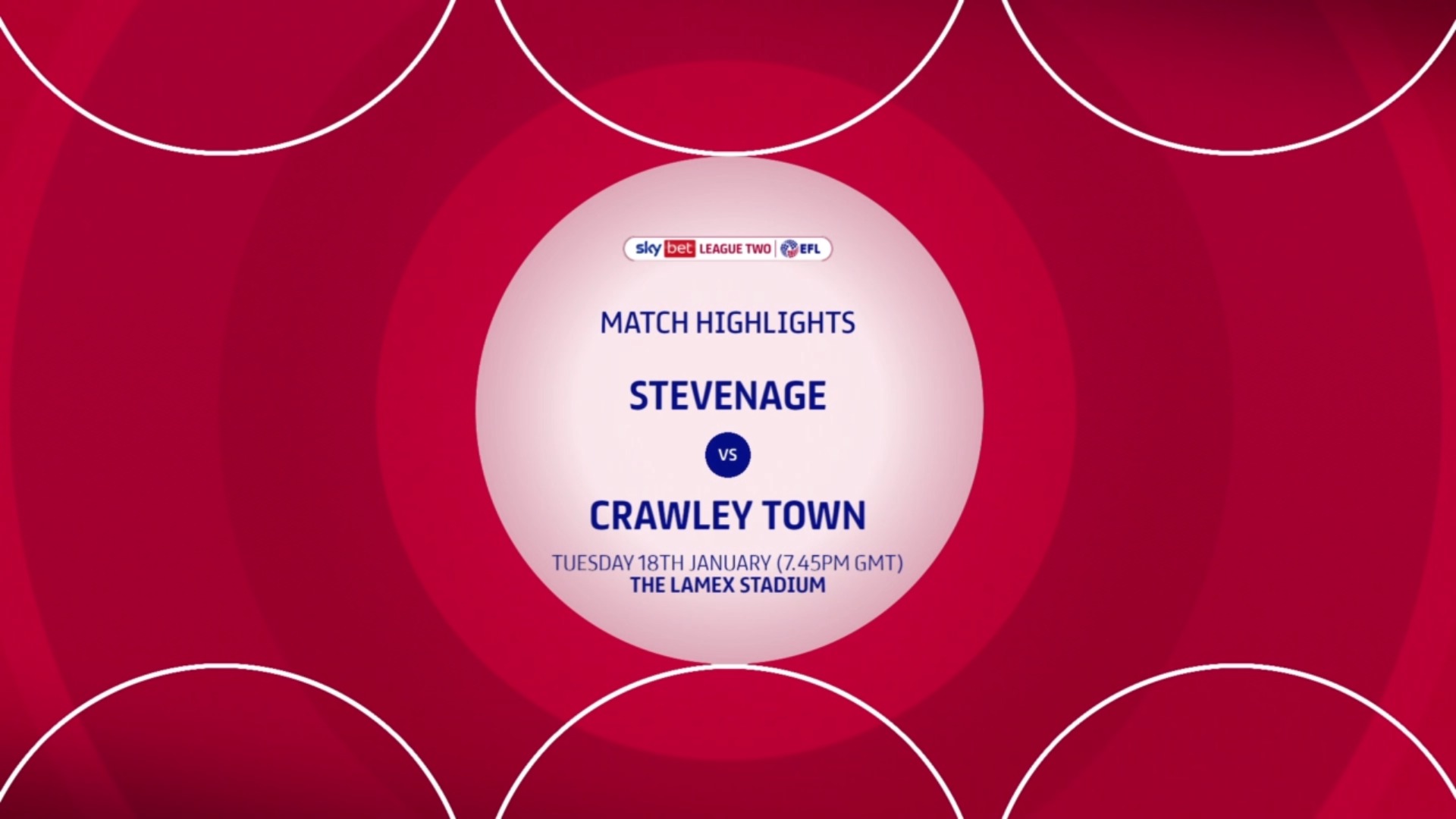 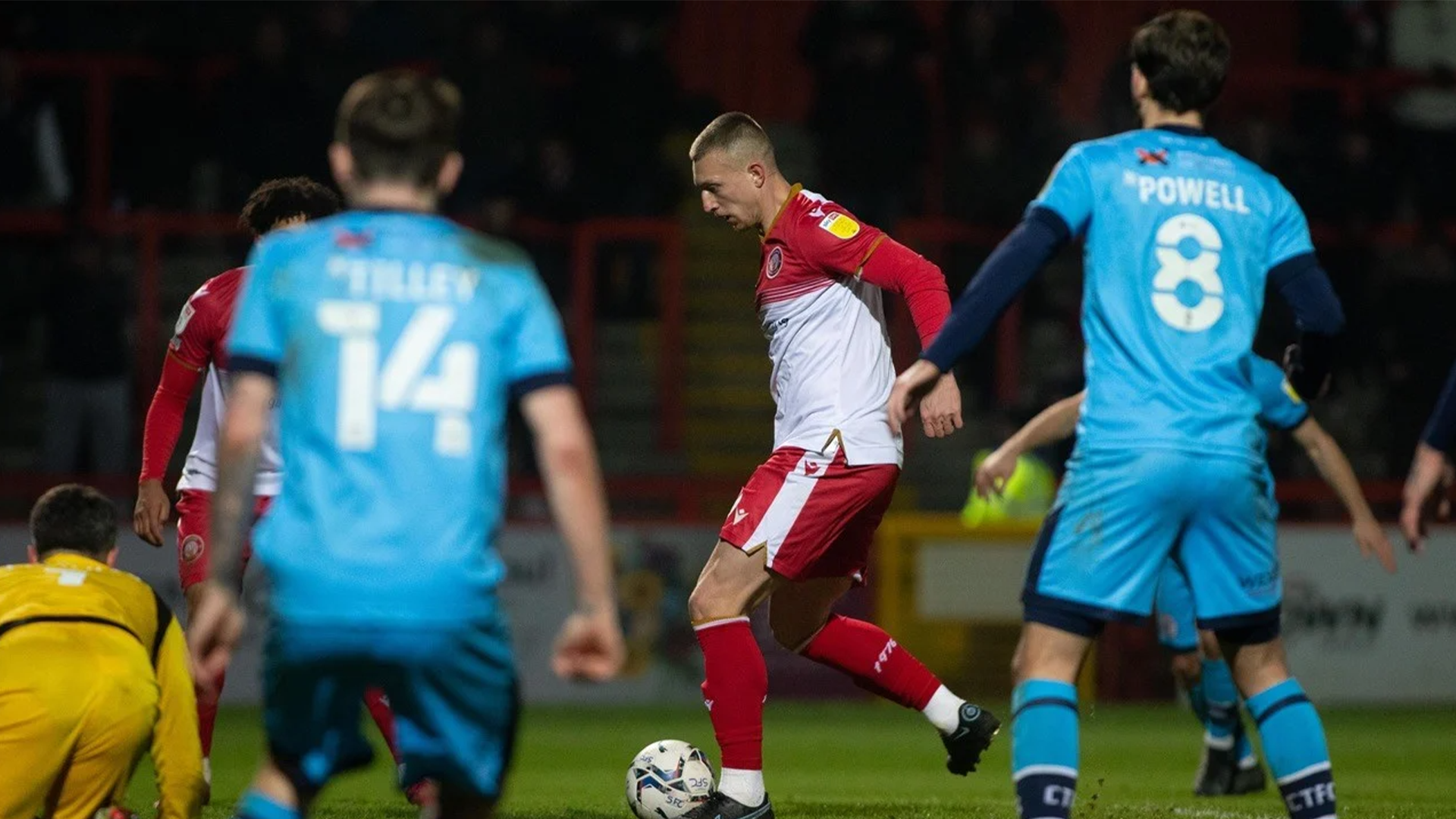