All eyes were on Steve Evans as he stood in the Boro dugout for the first time since his appointment as First Team Manager last week. His team consisted of four changes as Scott Cuthbert, Ben Coker, Brad Barry and Zain Westbrooke all returned to the starting eleven.

A changed full-back pairing of Brad Barry and Ben Coker was on display either side of experienced centre backs Scott Cuthbert and Luke Prosser. Terence Vancooten occupied the holding midfield role with Westbrooke, Taylor and Carter in front of him. A strike partnership of Elliott List and Luke Norris led the line.

The opening twenty minutes were reasonably even as both sides attempted to break the opposition down. Exeter sent a few balls into the Stevenage area but except from Matt Jay’s header floating over the bar, Boro defended well.

The Grecians’ first real chance of the game was superbly denied by Christy Pym who got down to save Josh Key’s low driven effort.

As a result, Exeter opened the scoring just before the half hour mark. Jevani Brown’s corner was delivered into the area, allowing Sam Stubbs to nod home, putting the visitors one goal ahead.

Stevenage replied just ten minutes later with a goal of their own. Elliott List picked up the ball before sending it across goal to Norris who tapped into level the scoring and bring some home to the Boro faithful.

However, an eventful half continued as Exeter scored their second goal just before half-time. Similar to the first goal, Sam Stubbs rose highest from a cross to nod home.

As the second half got underway, Steve Evans made his first substitution as Arthur Read came into midfield in place of Charlie Carter.

It was Boro who got the first chance of the half as they searched for another equaliser. Zain Westbrooke saw an opportunity on the volley, but his shot sailed just wide of the mark.

The next ten minutes were all Exeter as they created multiple chances on goal. Matt Jay and Offrande Zanzala each had chances from close range, but Jay’s effort rolled past the post whilst Zanzala’s was comfortably collected by Christy Pym.

On the hour mark, Evans made another substitution in order to try and get an equaliser with Bruno Andrade coming on for Zain Westbrooke. Then, ten minutes later Jamie Reid replaced Elliott List up top.

Stevenage created the next chance of the game from the right wing as Brad Barry delivered a pinpoint cross into Bruno Andrade who headed over the bar. About five minutes later, Offrande Zanzala went through on goal for Exeter. Under pressure, he managed to get his shot off, but Christy Pym comfortably claimed.

In the dying moments, Luke Prosser rose highest from a corner but his header went just inches over the bar. Unfortunately for Evans’ men this was the final chance of the game as the referee blew for full-time. Boro stay out of the drop zone as Oldham fail to pick up a point.

Match tickets are on sale for Boro's trip to Exeter City on Saturday 26th March 2022...

Match tickets are available to purchase online at www.borotickets.co.uk, from the Club Shop open Thursdays & Fridays 10am-5pm, and from the turnstiles on the day of the game (£1 increase).

Tickets are available from the Club Shop until 4pm on Friday 25th March, and online until 11.59pm on Monday 21st March 2022.

The Stevenage FC Supporters Association coach will be departing The Lamex Stadium at 8.30am on the day of the game, so please ensure to arrive with time to spare in order to confirm a scheduled departure. Tickets cost £30 for SA members and £35 for non-members. 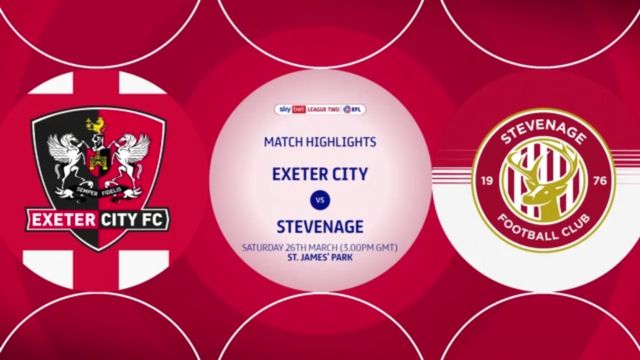 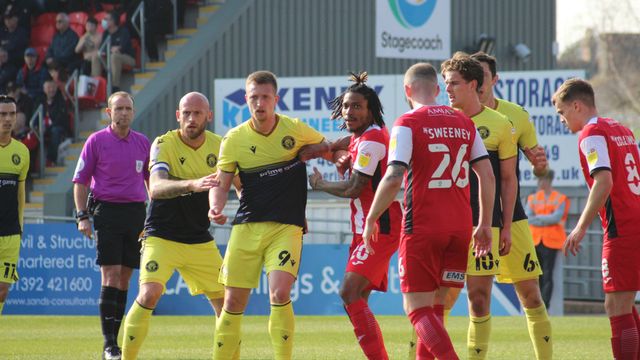