Team new for this afternoon's FA Cup First Round tie at MK Dons can now be confirmed...

Alex Revell names four changes from last weekend, with Joseph Anang returning between the sticks and Elliot Osborne, Terence Vancooten and Arthur Read back in the eleven. 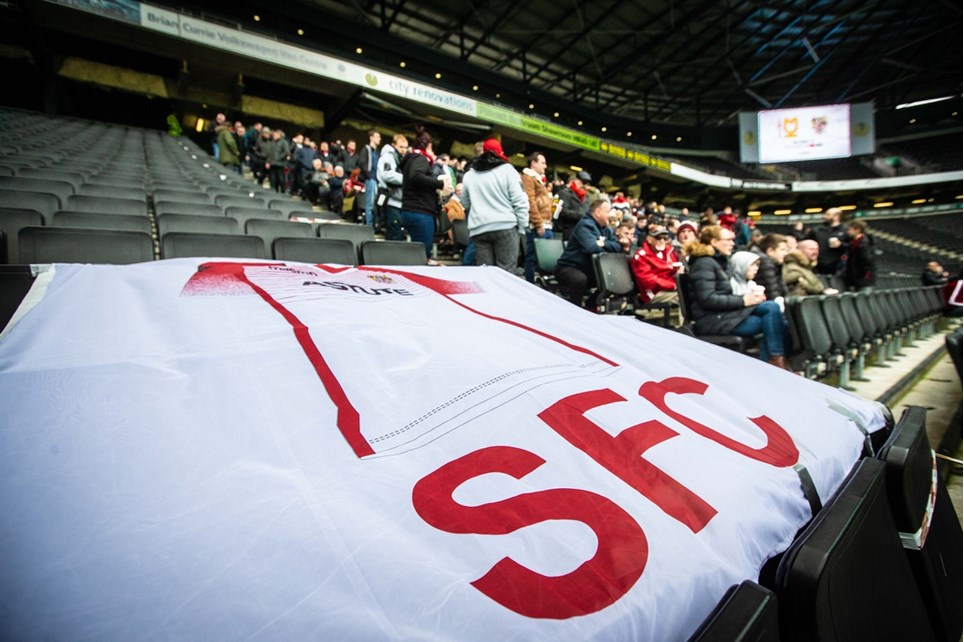 Second half goals from Brad Barry and Elliott List almost sent Stevenage into the Second Round, before Max Watters’ late leveller forces the replay…

Alex Revell named four changes from last weekend, including the return of goalkeeper Joseph Anang between the sticks. Elliot Osborne and Terence Vancooten also regained their place in the starting line-up, as well as Arthur Read after eight weeks out injured.

Lining up in a slightly different formation than usual with Elliott List the lone striker and Jake Reeves supporting, in front of a Jake Taylor and Arthur Read central midfield.

It was almost a nightmare start for the visitors within the first minute of the game, after Max Watters nodded past the oncoming Joseph Anang, but luckily the West Ham loanee reacted soon enough to scoop the ball from the goal line.

Five minutes later, MK Dons’ top scorer Scott Twine tried his luck with an effort from 25 yards, only to see deflected just wide of the post.

Twenty minutes in, Stevenage had their first real sight at goal. After a quick breakaway from Elliot Osborne down the left flank, the midfielder’s fizzed cross found an open Brad Barry in space inside the area. On the half volley, Barry took aim but somehow managed to drag his effort wide of the far post.

Just after the half hour mark, the hosts took the lead. A short corner found Josh McEachran on the edge of the eighteen-yard box, whose cross met the head of Harry Darling to nod into the back of the net. Questions marks may be asked about a potential offside, but Stevenage were a goal down regardless.

Jake Taylor picked up a yellow card for a strong tackle on Ilunga just before the break, as Alex Revell’s men went in behind at the interval.

The second half started in a similar manner to how the first ended. MK Dons, a goal up, were happy to keep possession and pass around Stevenage’s eighteen-yard box – looking for that killer ball to double the lead. Scott Twine blasted over from distance, before Aden Baldwin’s cross almost caught Joseph Anang off guard and clipped the top of the cross bar and behind.

Five minutes after the hour mark, Alex Revell made a double substitution with Max Melbourne and Jamie Reid introduced for Ben Coker and Elliot Osborne. The change almost paid off immediately when Arthur Read’s cross was deflected behind into the side netting, as Stevenage seemed to have an increased energy about them going into the latter stages of this game.

Increased energy and increased goal threat. With twenty minutes left to play, Stevenage were back in the game. A probing run from Elliott List got the forward to the by-line in the MK Dons box, who cut his cross back into the danger zone. His pass found Bradley Barry at the back post, who calmly placed the ball into the back of the net with his left foot. A first Stevenage goal for the defender and game on for Boro.

Two minutes later, Stevenage stunned Stadium MK to silence in taking the lead. Jamie Reid this time with the ball at his feet, driving towards the now reachable hosts’ goal. Reid’s pace got the better of the opposing defenders and squared the ball to Elliott List who placed his shot beautifully into the top corner. A surprising lead but Stevenage now had fifteen minutes to hang on against the League One play-off hopefuls.

And with that, came the MK Dons equaliser just moments later. Matt O’Riley’s lofted pass found Max Watters inside the area, who fired past Joseph Anang into the near post. Elation lasted just a matter of minutes, with a quarter of an hour left to play.

As the game sprang into life, both sides had chances to avoid a replay going into the final few minutes. Jake Taylor’s edge of the box effort was saved by Fisher, before Matt O’Riley’s shot was bravely blocked inside the Stevenage area.

A better second half showing from Stevenage, who will meet MK Dons once again at The Lamex Stadium in ten days’ time.

Tickets are on sale for Stevenage's FA Cup First Round fixture at MK Dons...

Taking place at 3pm on Saturday 6 November 2021, Boro travel to stadium:mk to take on Liam Manning's League One MK Dons in the First Round of this season's Emirates FA Cup.

Match tickets are available online from www.borotickets.co.uk, the Stevenage FC Club Shop (Thursdays 12pm-7pm & Fridays 10am-5pm) and from stadium:mk on the day of the game.

Ticket prices are as follows:

Ambulant Disabled and Wheelchair users are charged at the relevant age category, while carers go free with proof of DLA for mid/higher rate or PIP.

Tickets are available from the Club Shop until 4pm on Friday 5th November, and online until 3pm on Tuesday 2nd November.

The Stevenage FC Supporters Association coach will be departing The Lamex Stadium at 1pm on the day of the game, so please ensure to arrive with time to spare in order to confirm a scheduled departure. Tickets cost £20 for SA members and £25 for non-members.

Parking can be purchased online for £8 in advance from www.parkthecarhere.com, or on the day for £10.