Kicking off at 12:45pm, Boro will be live on BBC One as Tommy Widdrington’s King’s Lynn stand in the way of a place in Round Three of the FA Cup.

In the first round, Stevenage went on their travels to the Northeast before seeing out a 3-2 win against National League side Gateshead. Boro’s most recent fixture also ended in a 3-2 victory as Arsenal’s Under 21s suffered defeat in the Papa John’s Trophy.

King’s Lynn currently sit second in the National League North after suffering relegation from the top tier of non-league last campaign. So far, The Linnets have picked up ten wins and five draws from seventeen league matches, losing just two in their bid for promotion.

Last time out in the FA Cup, King’s Lynn made the headlines as they knocked out Sky Bet League Two outfit Doncaster Rovers away from home in the first round. Substitute Gold Omotayo scored the only goal of the game with ten minutes remaining to achieve the upset victory. Omotayo is the club’s top scorer this season, with nine in all competitions.

Tommy Widdrington was appointed Manager of King’s Lynn in December 2021 and was handed the tough task of keeping his side in the National League. The Linnets suffered relegation at the end of the campaign but have since looked determined to return to the fifth tier. Widdrington has experience in non-league, having had managerial spells at Eastbourne Borough, Hemel Hempstead and Salisbury City. Widdrington’s son Theo plays in midfield for King’s Lynn and has appeared in several matches this season.

This will be the first competitive encounter between Boro and The Linnets as the paths of both clubs have surprisingly never crossed. King’s Lynn entered administration on more than one occasion whilst in non-league, allowing Stevenage to overtake them in the leagues.

When Boro achieved promotion to The Football League in 2010, The Linnets adopted the new name of King’s Lynn Town and were playing their football in step six of non-league.

King’s Lynn play their home games at The Walks Stadium, which has a capacity of 8,200 with 1,200 seated. The ground is located on Tennyson Road, post code PE30 5PB.

Alternatively, it is just five minutes away from the train station. There is limited parking at the stadium, so supporters are encouraged to park at St James’ Multi-storey, just a five minute walk from the stadium.

Andrew Kitchen has been appointed Match Referee for tomorrow’s fixture, with Marc Wilson and Mark Jones as Assistants, and Declan Bourne as Fourth Official. Kitchen has handed out forty yellow cards and one red in sixteen games this campaign. 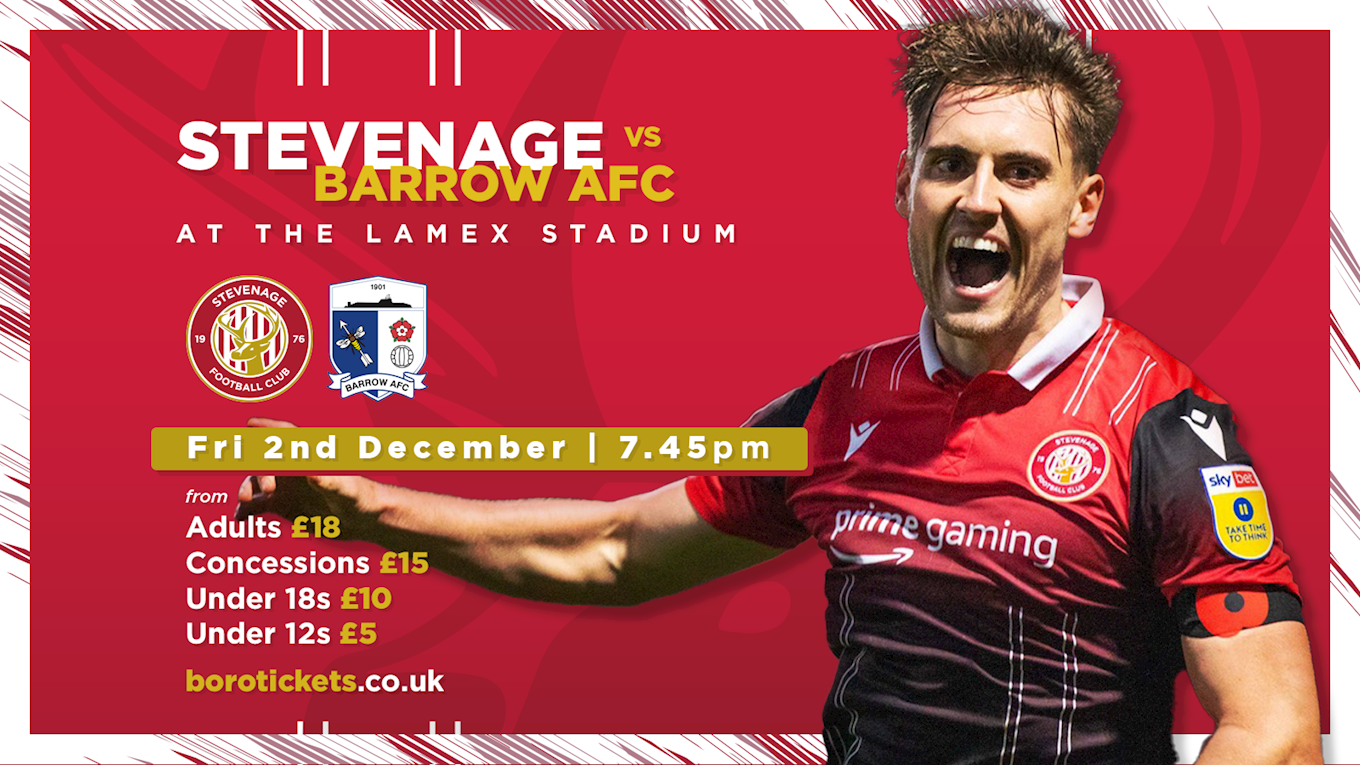 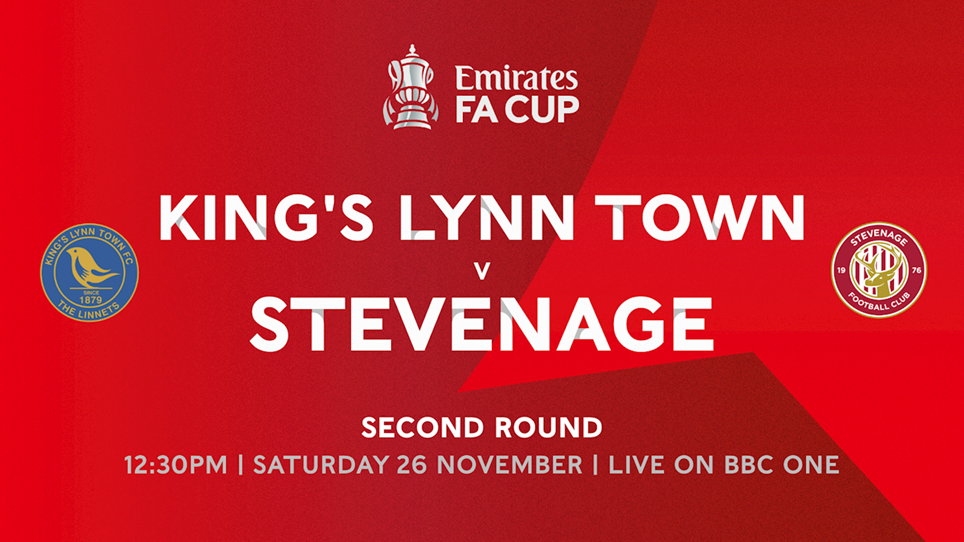 Stevenage progress into Round Three of the Emirates FA Cup through goals from Luke Norris and Jamie Reid...

Stevenage made their way to North-west Norfolk as attention turned to the Emirates FA Cup, with National League North side King’s Lynn the opponents. Steve Evans made five changes from Tuesday’s win over Arsenal’s youngsters as Taye Ashby-Hammond, Luther James-Wildin, Carl Piergianni, Luke Norris and Jamie Reid all returned to the starting eleven.

The opening fifteen minutes were relatively quiet as both sides looked to get the ball down and play their football in front of the BBC cameras. Boro were sharp at times as they moved the ball forward, with Alex Gilbey eventually getting the first shot of the game which was easy enough for The Linnet’s keeper to collect.

Twenty-five minutes in, Stevenage created a dangerous chance as they looked to take the lead. Luke Norris crossed the ball into the area and found Jamie Reid who took a touch and fired on goal, but his effort was denied by the feet of the King’s Lynn stopper.

Just minutes later, The Linnet’s came incredibly close to scoring the opening goal. A dangerous cross was sent into the Boro area with Gold Omotayo lurking at the back post, but the forward was unable to get enough on the ball as it went out for a goal kick.

The Linnet’s remained very much on the front foot as they aimed to cause an upset. Joshua Barrett received the ball on the left-hand side of the box before firing just wide of the near post.

Five minutes before the interval, Steve Evans was forced into his first change of the game as Terence Vancooten went down after a knock and was replaced by Jake Reeves.

In the closing stages of the half, Boro formed a delightful move and came close to going in front. Jordan Robert’s flick over the top of the defence landed at Jamie Reid’s feet but the striker couldn’t quite get enough power behind a shot as the keeper collected.

The second half soon got underway, and Stevenage opened the scoring just four minutes in. Jamie Reid turned past the King’s Lynn defender before picking out Luke Norris inside the area who fired into the bottom corner to give his side the lead.

Boro looked on fire now as they doubled their lead just moments later. Luther James-Wildin had the ball on the right wing before sending in a delightful cross to an unmarked Luke Norris who headed home to double his tally for the afternoon.

The goals just kept coming for the visitors as Boro scored their third in five minutes, this time with Jamie Reid finding his name on the scoresheet. Goal scorer Luke Norris played in Reid who cut in on his right foot before unleashing a powerfully curled effort into the top right corner before knee-sliding directly in front of the ecstatic travelling support.

Stevenage had completely killed the game off with fifteen minutes remaining as King’s Lynn had an enormous mountain to climb. Arthur Read looked to make his mark on the game as he wriggled past defenders and ran to the by-line, but his low cross was gathered by the keeper.

It was a professional second half from Stevenage whose ultimate aim was to see out the victory and play impressive football in the process. The tempo had certainly dropped but this was no concern for Evans and his coaching staff.

Two more subs were introduced in the closing stages as Danny Rose and Dean Campbell were handed some minutes on the pitch in place of Jordan Roberts and Luke Norris. Eventually the referee blew for full time to send Stevenage into Round Three of the FA Cup.

Kicking off at 12.45pm in the Second Round of this season's Emirates FA Cup, Steve Evans’ men make the 154-mile round trip to The Walks to take on Tommy Widdrington’s Linnets.

Match tickets must be purchased online from kingslynntownfc.ktckts.com up until kick-off on the day of the game at the following prices:

The game will also be broadcast live on BBC One.

The Stevenage FC Supporters Association coach will be departing The Lamex Stadium at 9am on the day of the game, so please ensure to arrive with time to spare in order to confirm a scheduled departure. Tickets cost £10 for SA members and £15 for non-members.

Purchase your train ticket to King’s Lynn at www.nationalrail.co.uk and keep up-to-date with latest travel info by following @nationalrailenq.

For more travel information to The Walks, click here.