Steve Evans’ side turn their attention to the FA Cup after a positive opening few months to their 2022/23 campaign. Last season, Boro made the competition’s Second Round after earning a victory against Milton Keynes Dons before falling short at Yeovil Town.

Gateshead earned their spot in the First Round of the FA Cup after overcoming fellow National League side Altrincham. Away from home, Gateshead managed to earn a replay after a 2-2 draw. In the replay, The Heed picked up a 2-1 win through an Adam Campbell brace.

Gateshead boss Mike Williamson was named player-manager in 2019 and has remained in the role ever since. During his playing days, Williamson appeared 150 times for Newcastle United, forming a strong partnership with Fabricio Coloccini at centre back in the Premier League. He also made roughly 150 appearances for Wycombe Wanderers, scoring eleven goals in the process.

Gateshead were regular opponents in the nineties, during Boro’s non-league days. From eleven previous meetings, Stevenage have won six whilst The Heed have won two. Boro’s biggest victory over Gateshead was in 1997 as Broadhall Way witnessed a 6-1 thrashing. This wasn’t the highest scoring match between the sides, however.

In 2009, Gateshead travelled to Hertfordshire and suffered a 5-3 defeat at the hands of Graham Westley’s Conference winning side. Charlie Griffin’s hat-trick was boosted by goals from Yemi Odubade and current Boro midfielder Michael Bostwick to complete the victory.

The Tynesiders play their home fixtures at Gateshead International Stadium, a multi-purpose, all-seater venue. The stadium opened in 1955 and currently has a capacity of 11,800.

Various concerts have been played at ‘The GIS’ which have seen the capacity rise to 30,000. The pitch is surrounded by an athletics track as the ground quite often plays host to Athletics competitions. 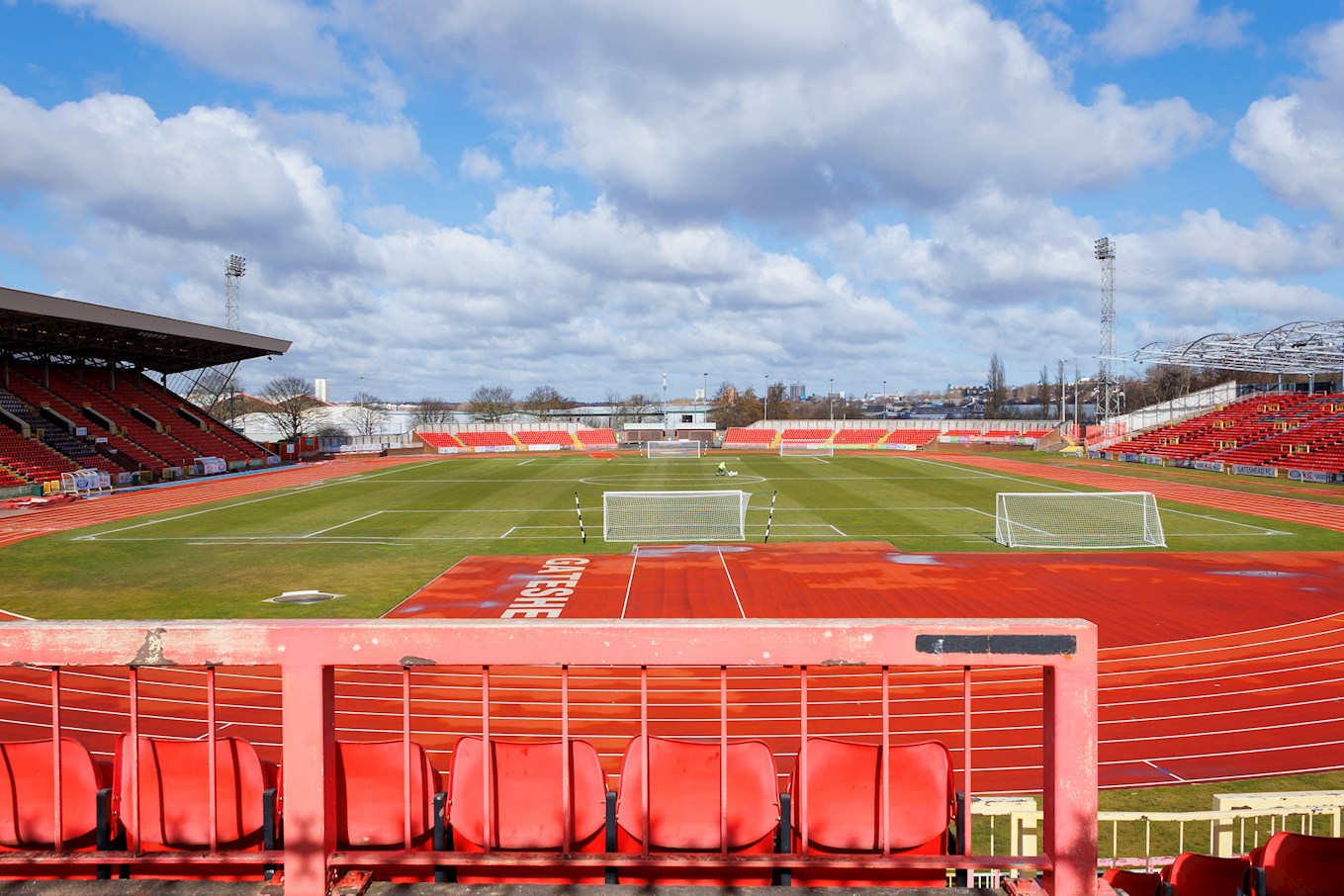 Peter Wright has been appointed as Match Referee for tomorrow’s fixture with Simon Clayton and David Avent as his Assistants and James Westgate as Fourth Official. Wright has dished out fifty yellow cards in fifteen games so far this season, and his yet to reveal his red. 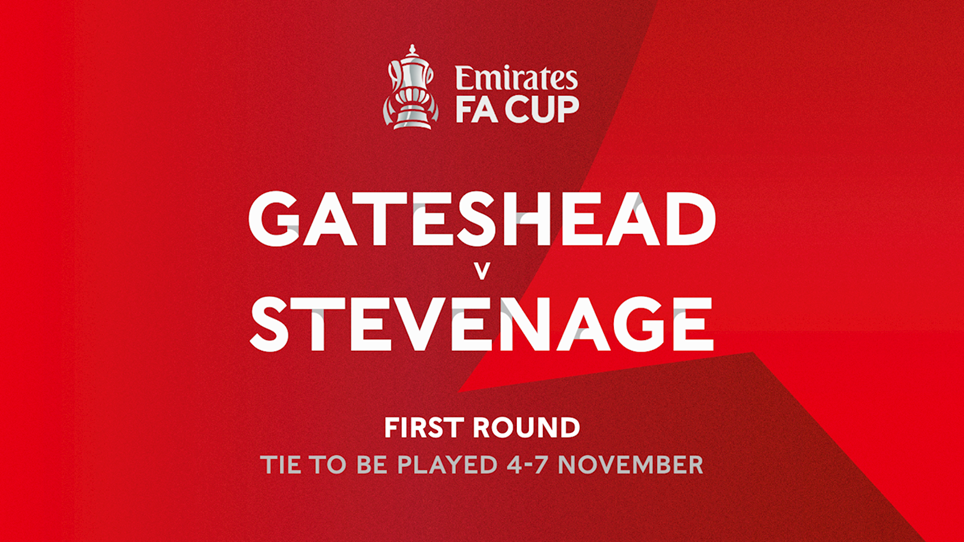 Stevenage drawn away to Gateshead in FA Cup First Round


Stevenage have been handed an away tie at National League side Gateshead in the FA Cup First Round...

Substitute Luke Norris grabs the winner to send Stevenage into the Second Round of this season's Emirates FA Cup...

Boro’s attention turned to The Emirates FA Cup this weekend as a trip to Gateshead was on the menu in this year’s first round. Steve Evans opted for four changes from last weekend’s draw in Colchester, with Aaron Chapman, Dean Campbell, Jamie Reid and Saxon Earley returning to the starting eleven.

The heavens opened as the game got underway, with Boro fans witnessing from an uncovered stand. Despite early pressure from Stevenage, it was Gateshead who got the first real chance of the game. Dan Ward received the ball on the edge of the area, but his first-time effort deflected past the post.

Boro grew into the game after a tough fifteen minutes. Alex Gilbey, Dean Campbell and Jordan Roberts all took aim from range, but Gateshead stopper James Montgomery continued to deny an opening goal.

Twenty-two minutes in, Stevenage managed to open the scoring. The in-form Jordan Roberts gathered the ball on the left-hand side of the area before firing in off the far post to give Boro the lead.

Just over ten minutes later, Boro’s lead was doubled. The Heed’s Kenton Richardson was unlucky to witness his header fly past James Montgomery and give Stevenage a two-goal advantage. The visitors defended well for the remainder of the half to go into the break two goals up.

The rain had finally stopped as the sides came out for the second half, with Gateshead having a mountain to climb. Stevenage created the first chance of the half, with Saxon Earley’s effort from inside the six-yard area being superbly denied by the Gateshead stopper.

Just eight minutes into the half, The Heed got a goal back. Will Harris found the top right-hand corner to give his side a glimmer of hope.

Immediately after the goal, Stevenage looked determined to regain their two-goal advantage. Alex Gilbey tried his luck from the edge of the area, but Montgomery held on well.

Soon after though, Gateshead found their equaliser. Kamil Conteh’s long-range effort flew past Aaron Chapman to level the scoring.

Steve Evans then made a triple substitution as Danny Rose, Jamie Reid and Dean Campbell made way for Luke Norris, Jake Reeves and Michael Bostwick.

It was Stevenage’s own, Luke Norris who made an impact and gave Boro the lead. The number nine received the ball inside the area and found the top left corner to regain his side’s lead.

With roughly ten minutes to go, Boro’s Jordan Roberts was handed a red card, after a strong challenge on the half-way line provoked a reaction.

The Fourth Official revealed that there would be four additional minutes, as Boro were forced to defend with ten men. Stevenage managed to see out any potential danger as the referee blew his whistle for full-time and send Boro into the Second Round. Attention now turns to Tuesday as Charlton Athletic come to The Lamex for a crucial Carabao Cup clash.

Attendance: 1059 including 139 away supporters.

Stevenage drawn away to Gateshead in FA Cup First Round


Stevenage have been handed an away tie at National League side Gateshead in the FA Cup First Round...

Kicking off at 3pm, Steve Evans’ men make the 490-mile round trip to the North East and the Gateshead International Stadium.

Match tickets must be purchased online at gatesheadfc.seatlab.com at the following prices:

Concessions are classed as 65+, Blue Light or Armed Forces (both serving and veteran). Disabled supporters are charged at the full price for their age category and are entitled to bring a carer free of charge.

Match tickets purchased online must either be printed at home or shown via smartphone upon entry.

The Stevenage FC Supporters Association coach will be departing The Lamex Stadium at 8am on the day of the game, so please ensure to arrive with time to spare in order to confirm a scheduled departure. Tickets cost £30 for SA members and £35 for non-members.

Purchase your train ticket to Gateshead at www.nationalrail.co.uk and keep up-to-date with latest travel info by following @nationalrailenq.