Steve Evans’ side currently sit third in Sky Bet League Two with seven wins from ten games and are just six points from the top of the table. Last Saturday, Boro put on a dominant display at The Lamex Stadium and came away from it with a 1-0 win over Harrogate Town through Dan Sweeney’s late header.

Crawley Town entered a new era over the summer with new ownership and management staff coming in. As well as this, The Red Devils signed last season’s Sky Bet League Two top scorer, Dom Telford. However, The side from West Sussex have got off to a disappointing start this campaign, picking up just one win from ten league games, sitting in 22nd place.

Crawley’s only home league victory this season came on the 13th of September as newly promoted Stockport Town arrived at The Broadfield Stadium. The Red Devils won 3-2 on the day with James Tilley, Dom Telford and Nick Tsaroulla grabbing the goals.

Kevin Betsy is currently in his first management role in senior football after being appointed Crawley manager in June 2022. He was previously in charge of Arsenal U23s for a season where his side finished third in The Premier League 2 Division One. Betsy loaned Arsenal U23 defender Mazeed Ogungbo to Crawley in the summer in order to bring a familiar face to his squad.

Boro and The Red Devils are two sides very familiar with each other, having faced each other on thirty-three occasions with Stevenage having a 48% win-rate. The first meeting between the sides dates all the way back to 1988, as a 12-year-old Stevenage Borough Football Club fell to a 1-0 defeat to Crawley Town in, what was once known as, The Knights Floodlit League.

The mid to late 2000s witnessed many non-league encounters between the two sides before Stevenage earned back-to-back promotions to League One. Crawley followed suit a year later and the clubs would meet again. Boro’s highest-scoring win against Crawley in the Football League ended 3-1 in August 2018. Alex Revell’s two late goals capped off an impressive victory away from home as Alex Reid grabbed the first goal early in the second half.

The most recent encounter between the two sides was at The Broadfield Stadium in February 2022 as Scott Cuthbert and Arthur Read’s late goals brought a two-goal deficit back to 2-2.

Crawley Town have played their football at the Broadfield Stadium since its opening in 1997. The ground holds a capacity of 6,134 with a record attendance of 5,880 being set in 2013 as Crawley hosted Reading in The FA Cup. Away fans are typically allocated The North Stand behind the goal.

Will Finnie has been appointed Match Referee for this fixture with Andrew Laver and Jack Clench as Assistants and Nicholas Cooper as the Fourth Official. Finnie has dished out twenty-five yellow cards and one red in eight games so far this campaign. 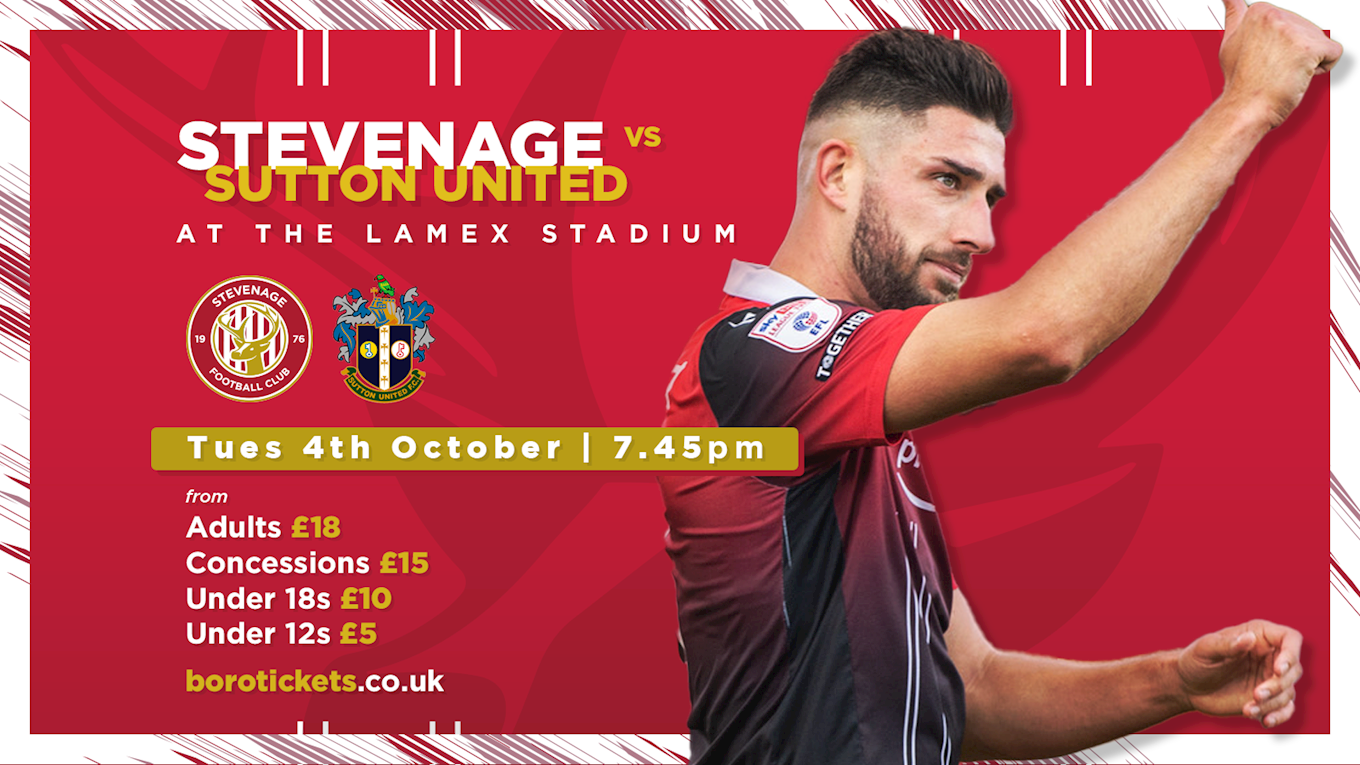 Boro made the trip to West Sussex for some more Sky Bet League Two action, looking to build on their impressive start to the campaign. The opponents, Crawley Town were looking for just their second league victory this season as they sat just outside the relegation places.

Steve Evans made four changes from victory at home to Harrogate last Saturday with Jordan Roberts, Arthur Read, Jamie Reid and Saxon Earley all returning to the starting eleven. Earley partnered up with Kane Smith in the wing-back roles for the first time this season, as opposed to his usual partner Luther James-Wildin.

Around the ten-minute mark, Boro enjoyed a highly attacking spell as Crawley were on the back foot. Jamie Reid cut in onto his right foot but fired just wide of the post.

Then, Terence Vancooten, who was occupying the holding midfield role in this match, drove forward and earned a free kick just inches outside the area. Jordan Roberts stepped up to take but fired into the wall.

Crawley witnessed their first sight on goal after twenty minutes, as dangerous midfielder James Tilley tried his luck from outside the Stevenage area but fired high and wide.

Down the other end though, Stevenage grabbed the first goal of the afternoon. Jamie Reid’s header fell to Jordan Roberts whose first-time volley inside the area rocked the crossbar and hit the back of the net to open the scoring against his former side.

With ten to go until the break, Stevenage could have, and potentially should have, doubled their lead. Jamie Reid neatly turned past Harry Ransom before striking his effort against the bar from close-range.

Moments before the interval, Taye Ashby-Hammond denied a threatening effort from Crawley’s Tom Fellows to ensure Stevenage went into half-time with a one-goal advantage.

Unfortunately for Evans’ men, it took no more than a minute of second-half action to lose their lead. Ashley Nadesan was lurking around the six-yard box as the ball deflected off the forward and over the goal line past Taye Ashby-Hammond to level the scoring.

Just after the hour mark, after a quiet period, Boro had an opportunity to regain their lead. Danny Rose broke through before cutting in on his right and striking the ball low and hard past the far post.

Evans then opted for a triple change as Jamie Reid, Arthur Read and Jordan Roberts made way for Luke Norris, Jake Taylor and Jake Reeves in a bid to go back in front.

Crawley were beginning to apply some pressure on the Boro defence with twenty minutes left to play. James Tilley’s left footed strike inside the area was well caught by Taye Ashby-Hammond.

With five minutes remaining, Stevenage earned themselves a penalty through a handball in the area. Substitute Luke Norris stepped up to take before firing into the bottom right corner and celebrating with the 319 Stevenage supporters behind the goal.

It was then a matter of seeing out the game in the final ten minutes, including a long spell of added time. Steve Evans side did exactly what was asked of them as the referee blew for full time to award Boro an incredibly important three points in Sky Bet League Two. Now onto Tuesday as Stevenage return to The Lamex to face Sutton United.

Match tickets are available online, from the Stevenage FC Club Shop (open Mondays, Tuesdays, Fridays 10am-5pm) and from the Ticket Office at Broadfield Stadium on the day of the game.

Supporters are able to collect or purchase their match tickets from the Stevenage FC Club Shop until 4pm on Friday 30th September.

The Stevenage FC Supporters Association coach will be departing The Lamex Stadium at 11.30am on the day of the game, so please ensure to arrive with time to spare in order to confirm a scheduled departure. Tickets cost £20 for SA members and £25 for non-members.

Purchase your train ticket to Crawley at www.thameslinkrailway.com and keep up-to-date with latest travel info by following @TLRailUK. 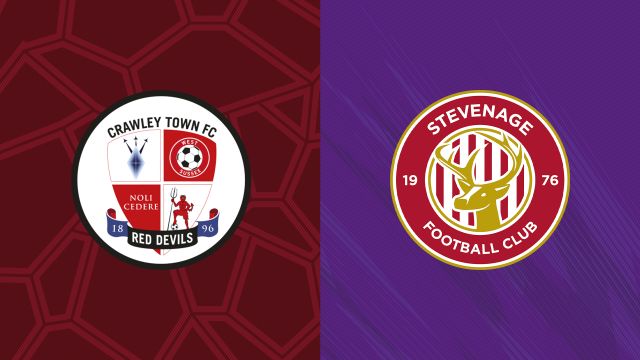 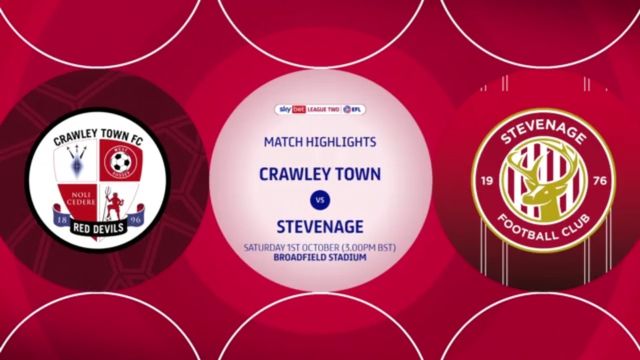 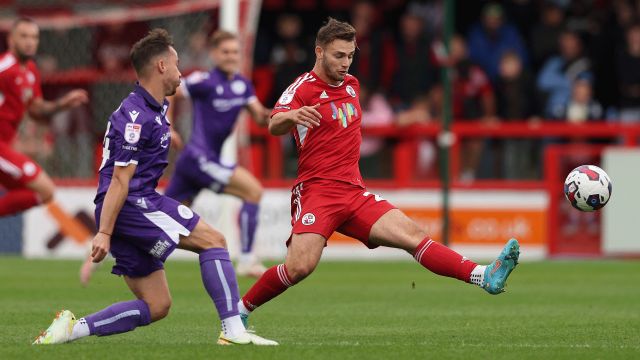