Stevenage looked to continue their impressive campaign with Swindon standing in the way of another three points at The Lamex Stadium. Steve Evans made two changes from Tuesday’s 3-0 victory over Sutton with Jake Reeves and Jamie Reid returning to the starting eleven, replacing Michael Bostwick and Luke Norris respectively.

The atmosphere inside The Lamex built very quickly as Stevenage were the side to kick off, attacking towards the packed-out away end for the first half. Boro earned themselves an early corner to excite the home crowd, but the danger was headed away.

Swindon grew into the game very soon and were starting to prove why they’re a side battling for promotion. Ronan Darcy attempted to strike low past Ashby-Hammond, but the effort was tame enough for the goalkeeper to collect.

After just ten minutes though, Boro took an early lead and were looking threatening. Luther James-Wildin’s cross caused issues for the Swindon defence as Danny Rose was able to flick the ball over to Jordan Roberts at the back post whose powerful header found the back of the net.

Despite allowing Ronan Darcy to take aim from the edge of the box for a second time, Stevenage refused take their foot off the pedal as they searched for a second goal. The strikers, along with Jordan Roberts behind, were full of energy as Jamie Reid’s pressure on the Swindon goalkeeper gave him a chance on goal but the effort was cleared off the line.

In the final ten minutes of the half, it was clear that Stevenage had no hesitation to shoot, as the Swindon defence was on the back foot. First, Jake Reeves’ effort was blocked before Luther James-Wildin blasted the ball just over the bar from outside the area. Stevenage soon won the ball back though and played some nice football which resulted in Jamie Reid’s header landing on the roof of the net.

Swindon looked to apply pressure on Boro in the closing stages of the half but were unable to find the back of the net from several balls into the box as the referee blew for half-time.

As the second half got underway, Stevenage looked determined to keep a hold of their lead and to try and build on it. Alex Gilbey burst through the midfield before taking on a defender and taking aim, but Sol Brynn held on to deny.

Swindon searched for a way back into the game soon after with former Boro man, Remeao Hutton providing crosses from the right-hand side, but Stevenage defended well.

As the match hit the hour mark, Stevenage doubled their lead. Alex Gilbey set the ball to Jamie Reid on the left-hand side of the box, as the forward squared it to Jordan Roberts who tapped it home to double his tally for the afternoon.

Boro captain, Carl Piergianni was replaced by Michael Bostwick soon after the goal to give fresh legs in defence. Then, Jake Taylor replaced Jamie Reid in order to see out the game.

The game slowed down in pace once Stevenage had a two-goal advantage. Swindon’s Ricky Aguiar took aim from outside the box but failed to trouble Ashby-Hammond as the ball rolled past the post. David Amoo was then substituted on in place of Jordan Roberts who received a wonderful ovation from the home crowd.

The Fourth Official then indicated four minutes of added time as Boro were putting bodies on the line to defend their lead. Stevenage saw the game out to perfection as the referee blew his whistle to conclude a spectacular afternoon at The Lamex Stadium. 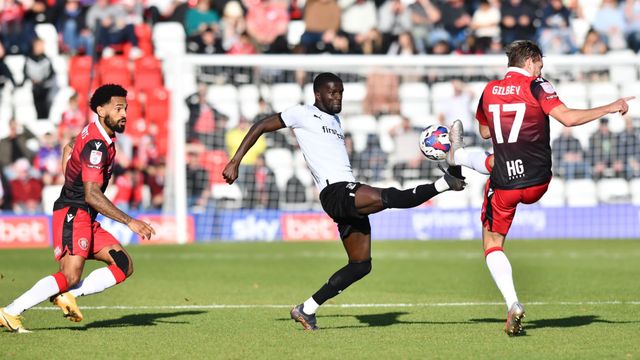