Stevenage travelled North to face a Bradford City side who, before today, sat in sixth place and were unbeaten at home in the league. Steve Evans made just two changes from victory at home to Newport on Tuesday, swapping wing backs Kane Smith and Max Clark out for Luther James-Wildin and Saxon Earley.

The University of Bradford Stadium observed a minute’s silence followed by the singing of the National Anthem prior to kick-off, in memory of Her Late Majesty, Queen Elizabeth II.

Within the first five minutes, Boro were under real pressure as Taye Ashby-Hammond superbly tipped Scott Banks’ header over the bar for a corner.

From the resulting corner, however, Bradford took an early lead. Dominant number nine, Andy Cook rose highest to knock it past Ashby-Hammond with his head to open the scoring and excite the Bantams crowd.

Stevenage created their first chance of the game after twelve minutes and seemed determined to not allow the noise in the stadium to affect them. Luther James-Wildin’s delightful long ball found Jamie Reid on the left wing who cut in on his right and took aim, but his tame effort was collected by Harry Lewis in goal.

Boro grew into the game after a disappointing first five minutes. Alex Gilbey’s corner found the ever-so present Carl Piergianni who headed inches over the bar.

Just after half an hour, it appeared as though Bradford would grab a second goal. Harry Chapman drove a low ball into the box with Andy Cook lurking. The striker looked to tap in, but Ashby-Hammond denied and then denied again when the ball rebounded back. Boro were putting bodies on the line to avoid a two-goal deficit.

Down the other end, Alex Gilbey received the ball just inside the area before unleashing a powerful strike on goal, but Harry Lewis acrobatically denied the danger. The remainder of the half was reasonably quiet in terms of chances as Boro went into the break a goal down.

The opening stages of the second half saw Bradford on the back foot as Boro searched for an equaliser. Jake Reeves stepped up to take a free-kick on the edge of the box but his effort was blocked and the danger was clear.

With ten minutes of the second half played, Bradford scored with their first chance of the half. Tyreik Wright darted down the left wing before crossing it into dangerman Andy Cook who tapped it past Ashby-Hammond to double his tally for the game.

Steve Evans then made his first substitutions of the game with Jake Taylor and Danny Rose replacing Jake Reeves and Luke Norris respectively.

Just five minutes after their second goal, The Bantams made it three. Debutant Tyreik Wright cut inside on his right foot and smashed low and hard past Ashby-Hammond.

After conceding three, Boro had an incredibly high mountain to climb. Carl Piergianni looked to head on goal from a corner, but his effort sailed over the bar.

With just a few minutes to be played, Bradford’s Brad Halliday received a red card as a result of a rash challenge on Saxon Earley. The final whistle was then blown to conclude a disappointing afternoon in West Yorkshire.

Kicking off at 3pm in West Yorkshire, Steve Evans men travel to the University of Bradford Stadium to take on Mark Hughes' Bantams.

Match tickets are available from www.borotickets.co.uk, the Stevenage FC Club Shop (open Mondays, Tuesdays, Fridays 10am-5pm) and from the away turnstile on Midland Road on the day of the game (no cash sales).

Online ticket sales are collection only up until midday on Friday 16th September, and remain available in-store until 4pm on the same day.

Any ticket for Saturday purchased from borotickets.co.uk & not collected from our Club Shop by 4pm Friday will be available to collect from Bradford on the day of the game.

The Stevenage FC Supporters Association coach will be departing The Lamex Stadium at 9am on the day of the game, so please ensure to arrive with time to spare in order to confirm a scheduled departure. Tickets cost £25 for SA members and £30 for non-members.

Purchase your train ticket to Bradford at www.nationalrail.co.uk and keep up-to-date with latest travel info by following @nationalrailenq.

For more travel information to the University of Bradford Stadium, click here. 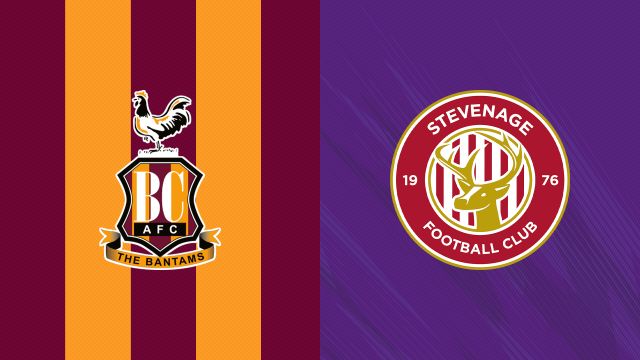 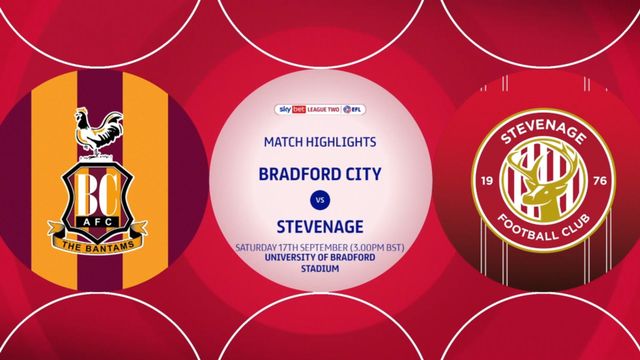 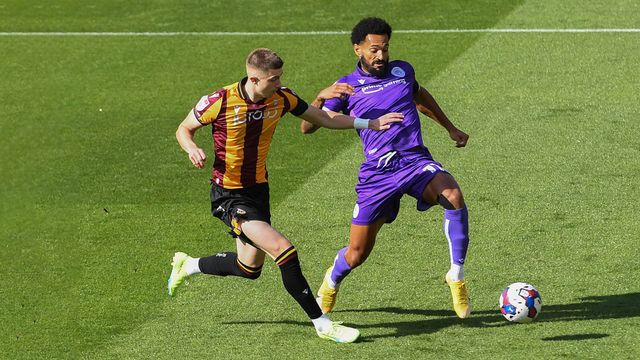